Smith Center, Kansas, is one of the least known geographical center locations, but held the title from roughly 1894 to 1918. The basis for Smith Center's location at 39�55'N / 98�50'W is most likely from Henry Gannett who was a geographer for the U. S. Geological Survey and also in charge of compiling the United States Census of 1890. The census report for 1890 was published in 1894 and the first printing makes no mention of the geographical center. Also in 1894, Henry Gannet published a book titled "The Building of a Nation" which stated the geographical center location about 10 miles north of Smith Center at 39�55'N 98�'50'W. The second printing of the 1890 Census in 1896 published the same information that was printed in Gannett's book. The same location was subsequently published in the 1900 and 1910 census reports.

Apparently no one paid any attention to this location until around 1913 when the Kansas City Star newspaper sent a reporter out to investigate the location. No one could determine the exact location due to the inability to determine latitude / longitude positions accurately. Some thought a large cottonwood tree was a suitable location, while others chose a windmill on a local farm.

There were two small towns in the area known as Reamsville and Thornburg. Local residents thought that one of these towns should be designated as the location. Both towns continued to appear on the Kansas Highway transportation maps until 1972, but neither remains today. In 1916, the Smith Center Commercial Club started an effort to raise funds for the placement of the monument. The suggested location, as near as anyone could determine would be in the NE Quarter of Section 7, T2S, R13W. This would have been about 1.5 miles too far south. Apparently fundraising failed since there is no mention of a monument ever being placed.

The true location according to the latitude/longitude position is in the SW Quarter of Section 31, T1S, R13W. Nothing exists at this location and the exact location is in a wooded ravine. The exact locations of the cottonwood tree and windmill are unknown, but were probably somewhere in the area. In 1918, the U. S. Coast & Geodetic Survey determined that the geographical center location should instead be near Lebanon, Kansas. Smith Center's short claim to fame vanished as quickly as it had become known. 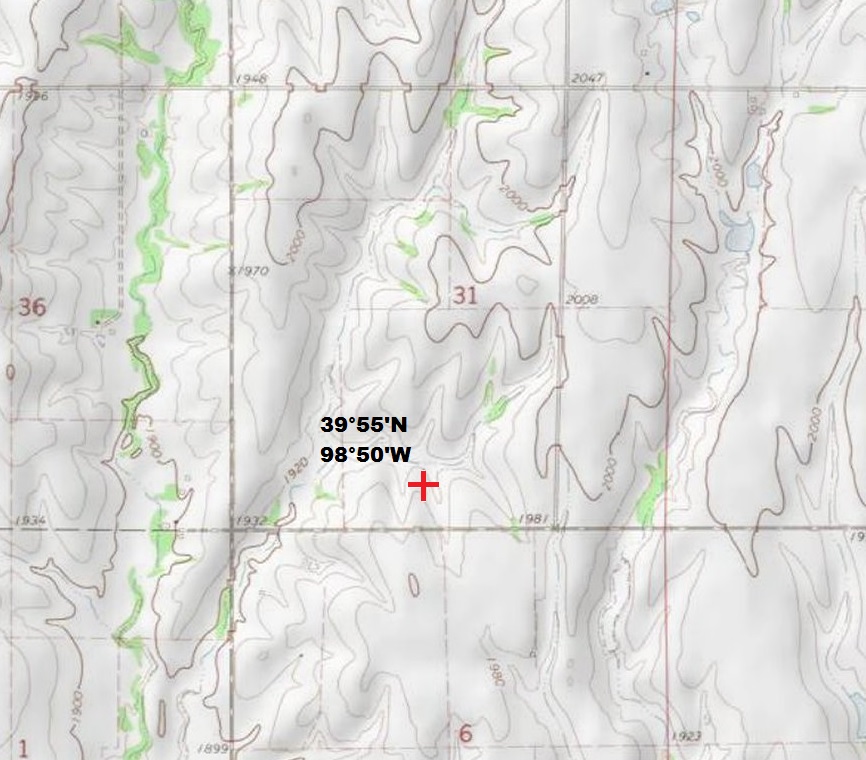 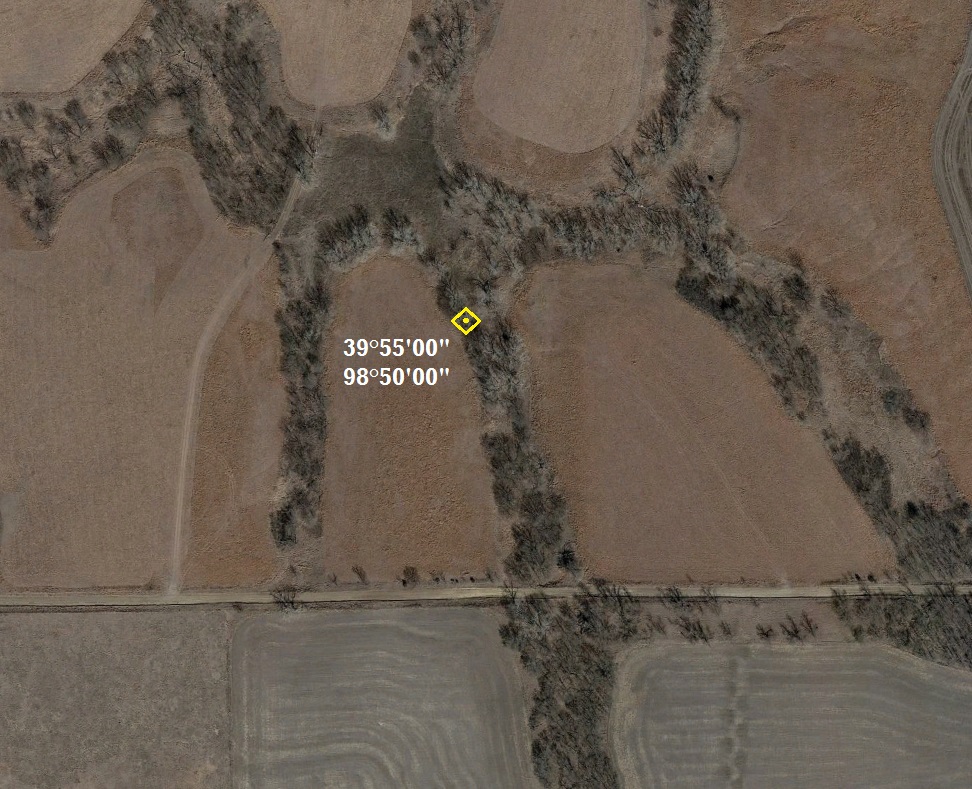 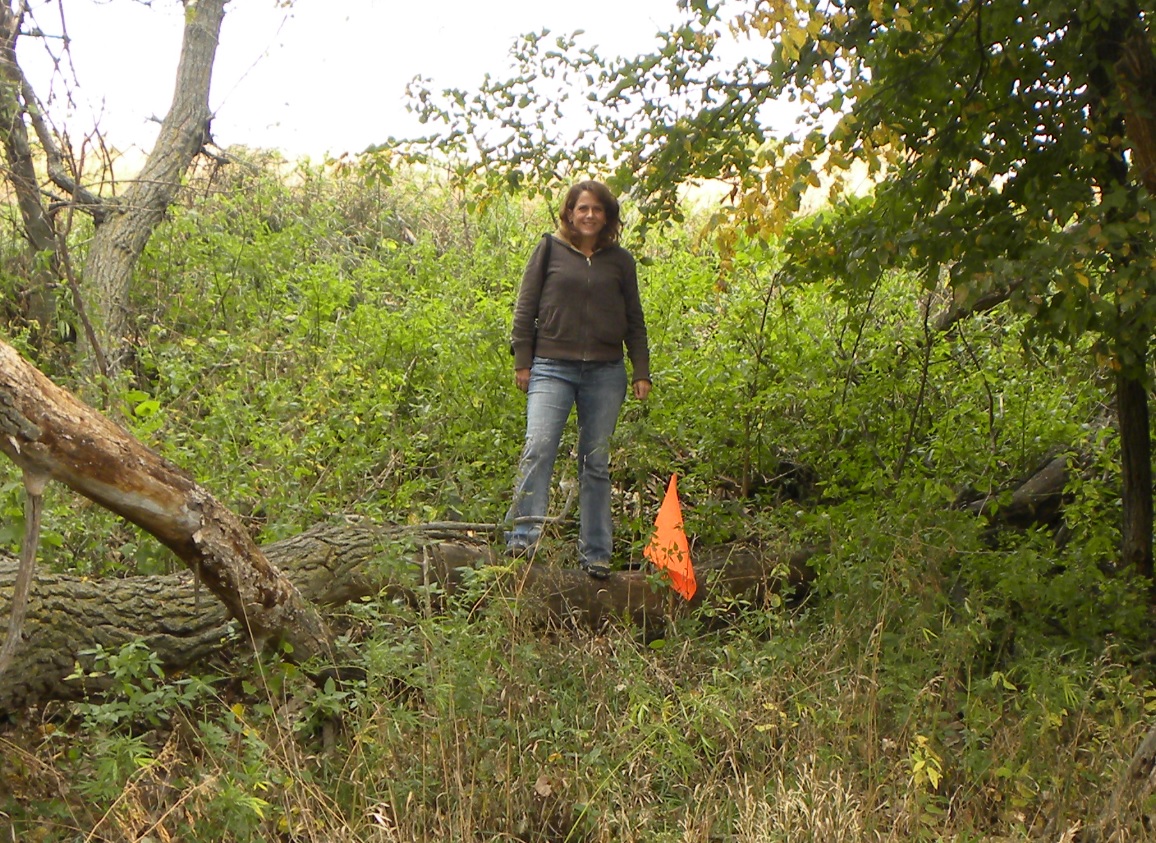 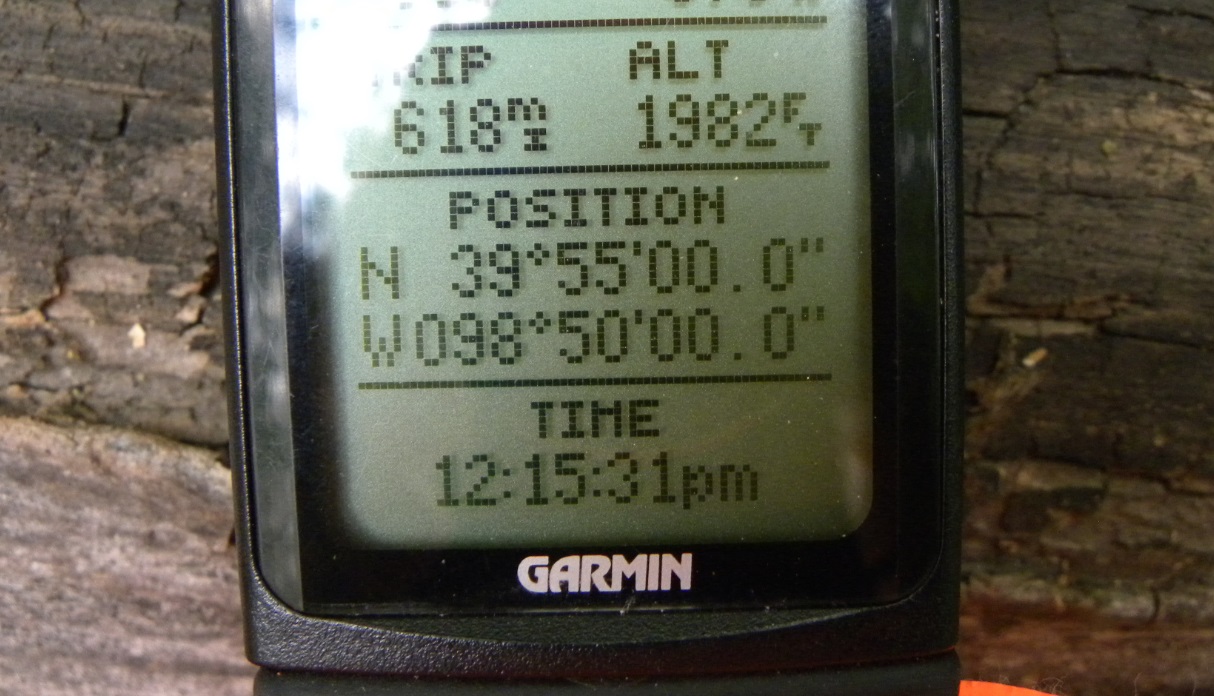 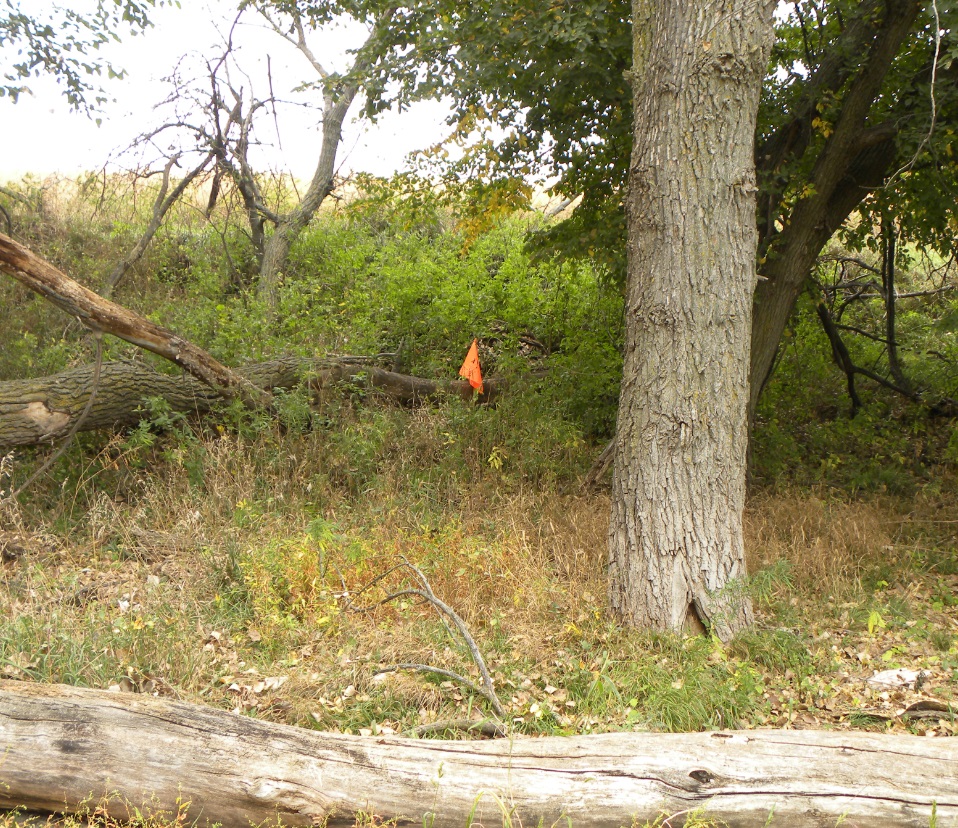 The flag marks the location of the former geographical center.
Jerry Penry photo. 10/7/2011. 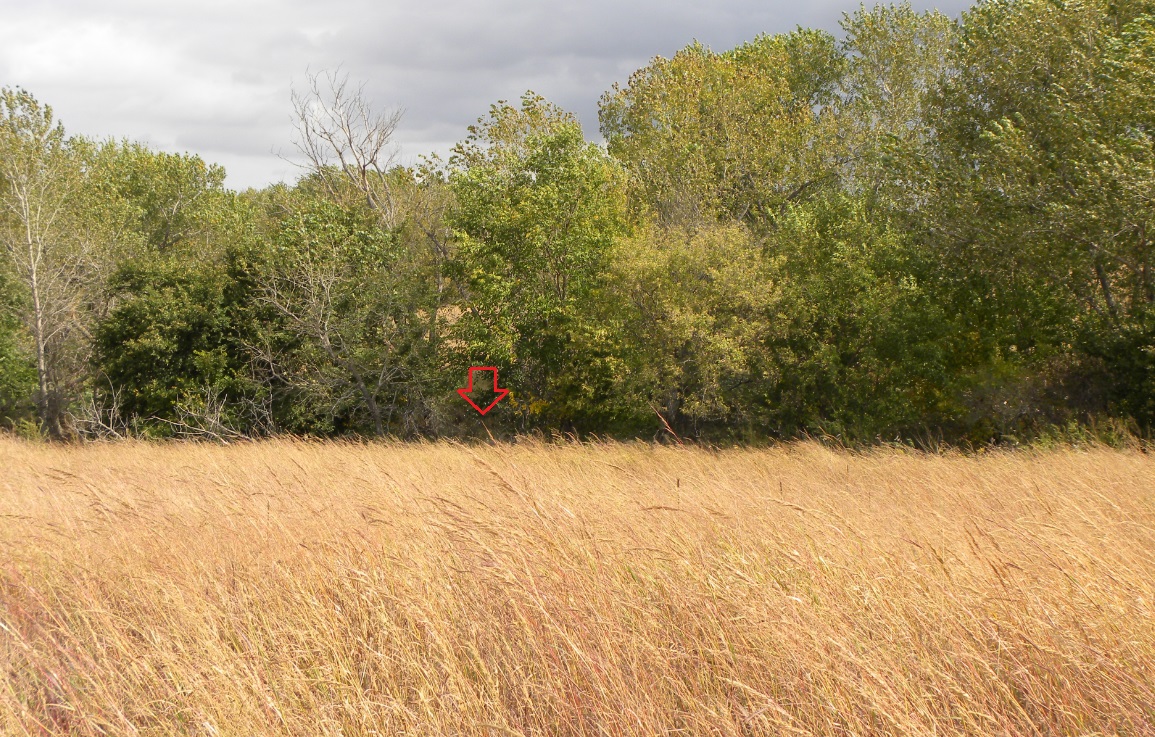 View from the view looking north toward the location.
Jerry Penry photo. 10/7/2011. 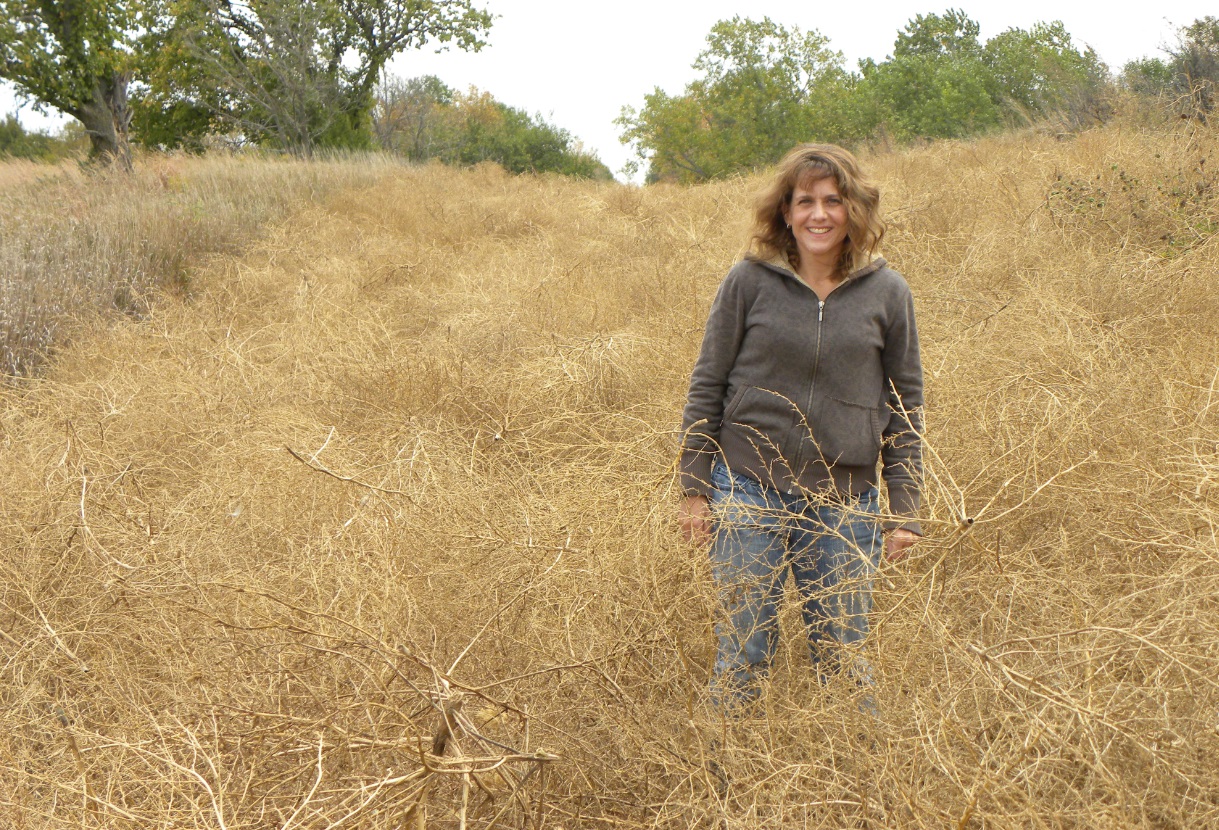 Jenny on the nearby east-west county road that is completely covered in tumble weeds.
Jerry Penry photo. 10/7/2011. 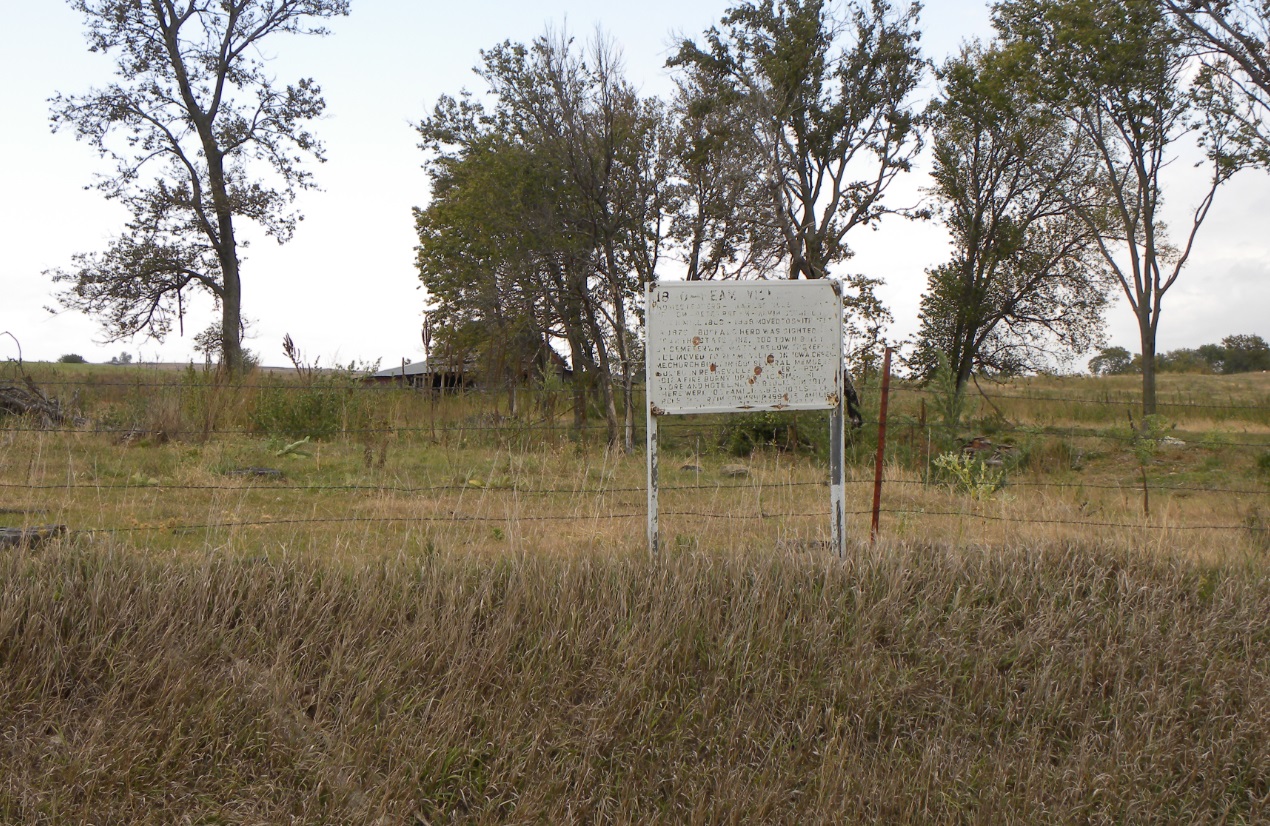 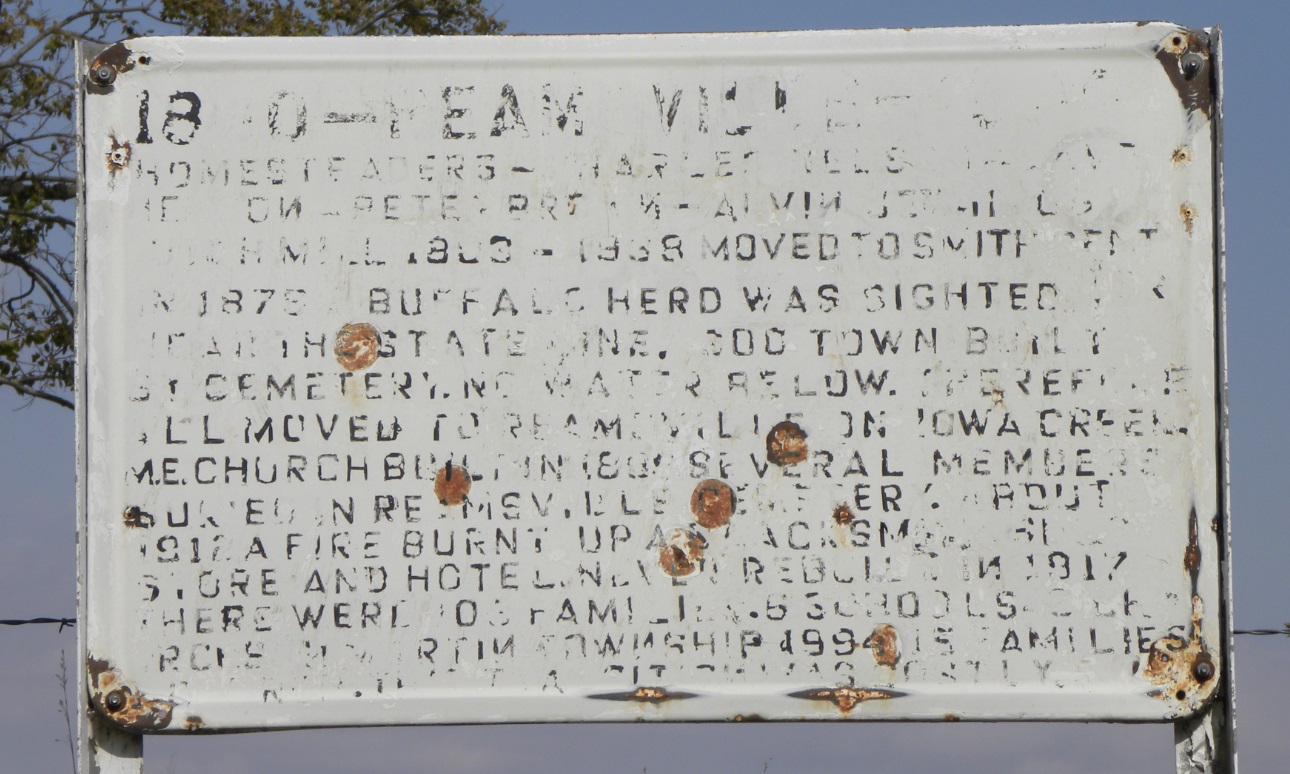 Sign placed along the north side of the road at Reamsville.
Jerry Penry photo. 10/7/2011.

1880 - Reamsville - 1980
Homesteaders - Charles Nelson - Dave Nelson - Peter Brown - Alvin Jennings. Dutch Mill 1883 � 1938. Moved to Smith Center. In 1876 a buffalo herd was sighted near the state line. Sod town built on cemetery.
No water below. Therefore all moved to Reamsville by Iowa Creek. M.E. Church built in 1898. Several members buried in Reamsville Cemetery.
About 1912, a fire burnt up a blacksmith shop store and hotel. Never rebuilt. In 1917 there were 108 families, 6 schools, 3 churches in Martin Township. 1994 - 15 families, 1 church. This transition was costly. 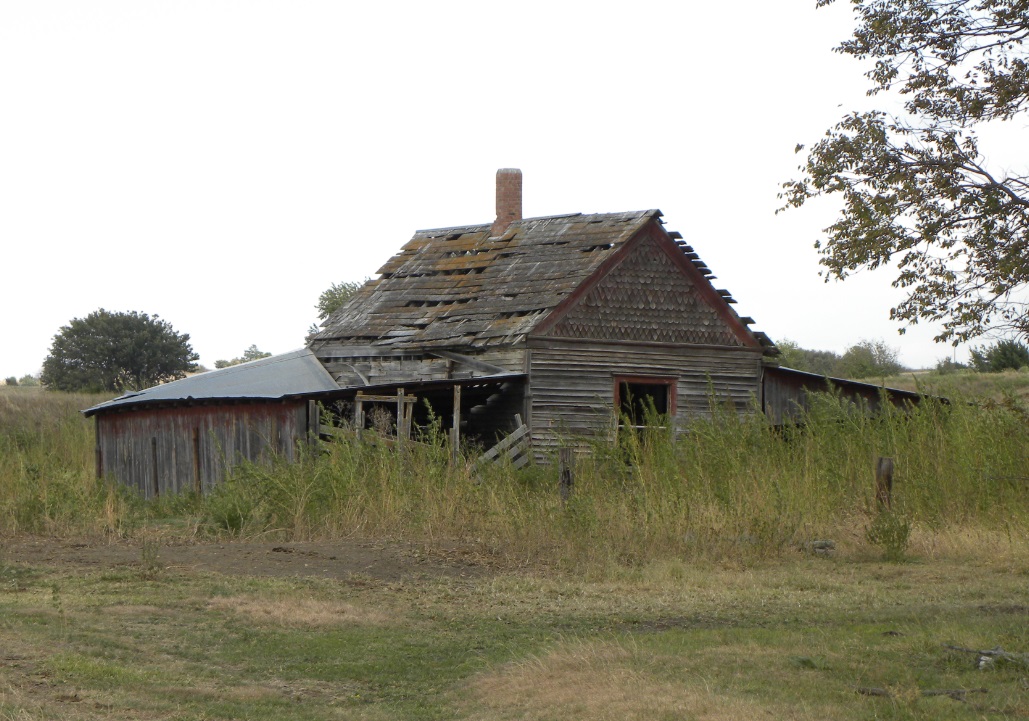 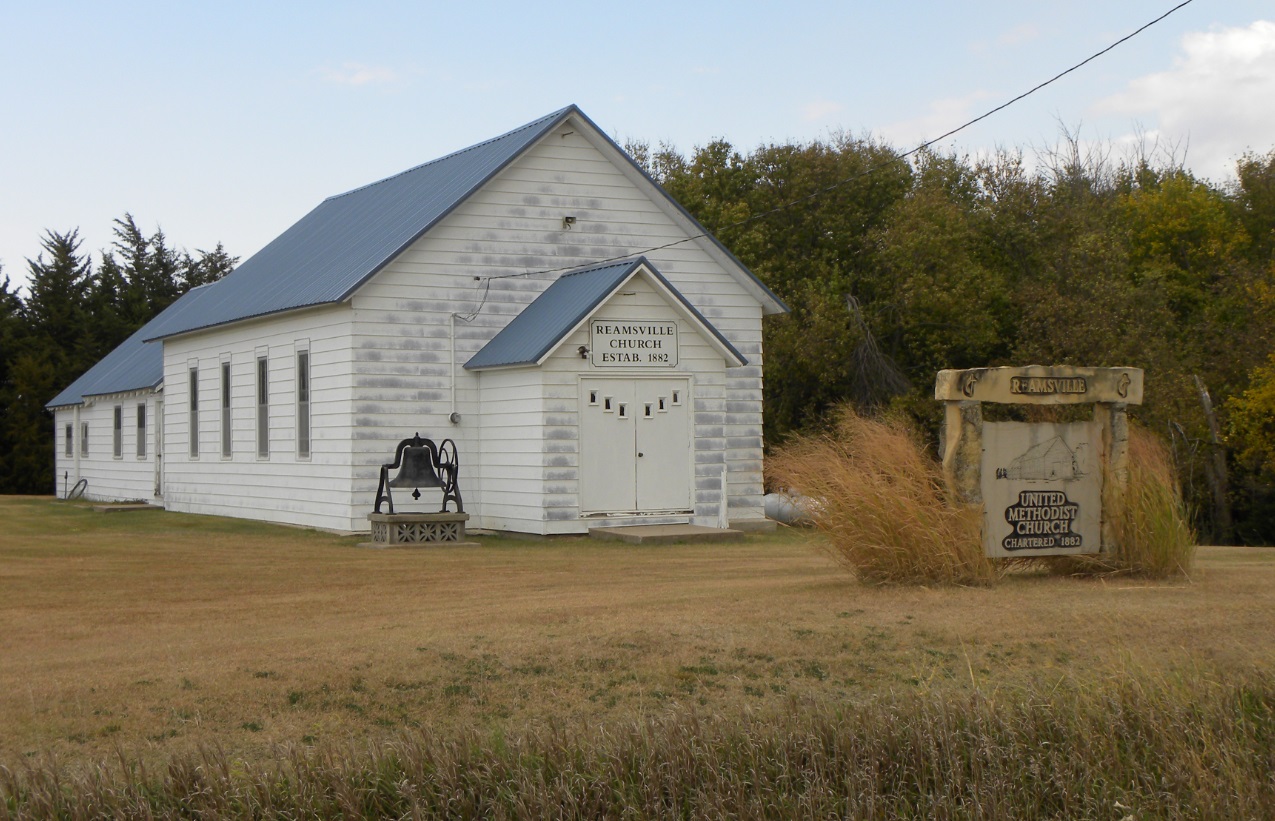 Church at Reamsville which has been preserved.
Jerry Penry photo. 10/7/2011. 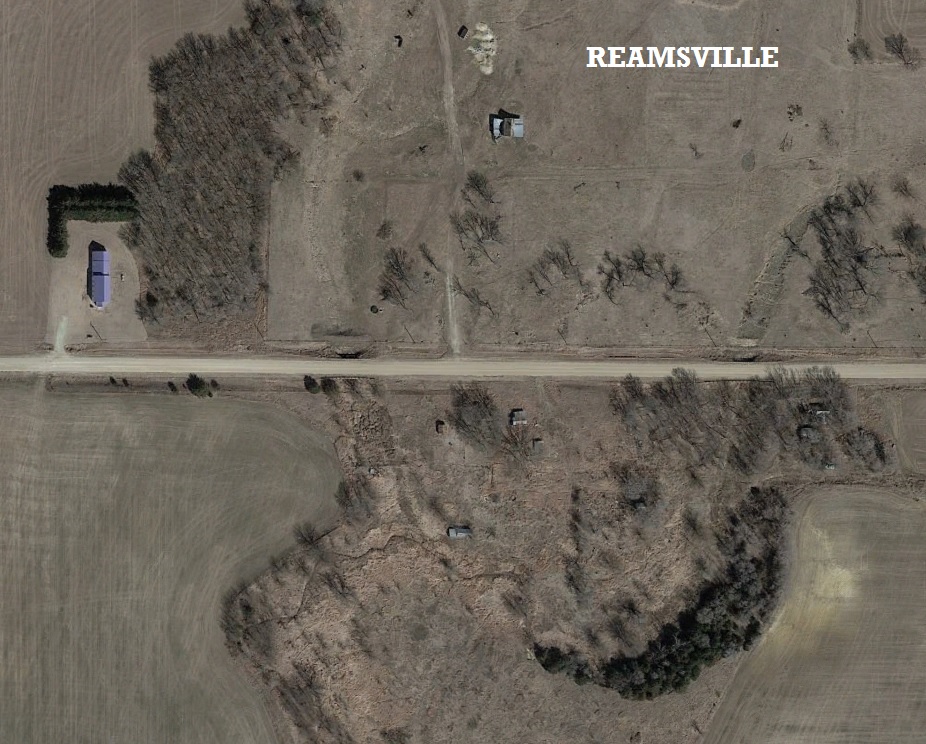 Aerial view of Reamsville. The old house is at top center and church is at left.
Google Earth image. 3/13/2014. 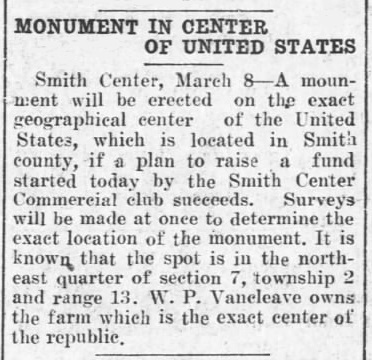 Plans for a monument that never materialized.
Salina Evening Journal. 3/08/1916. 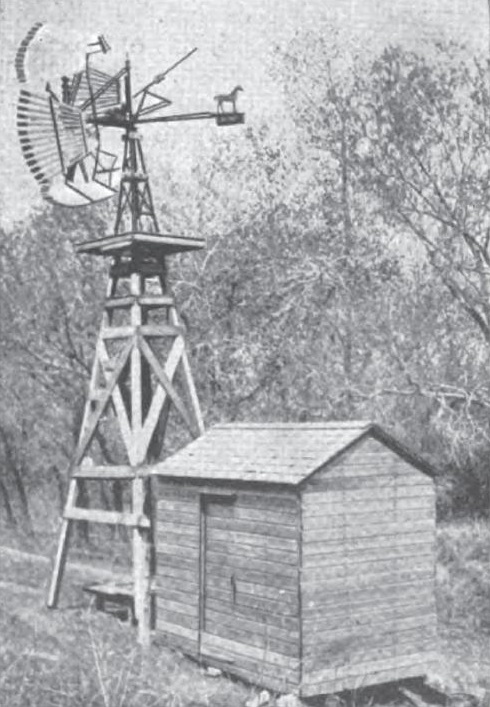 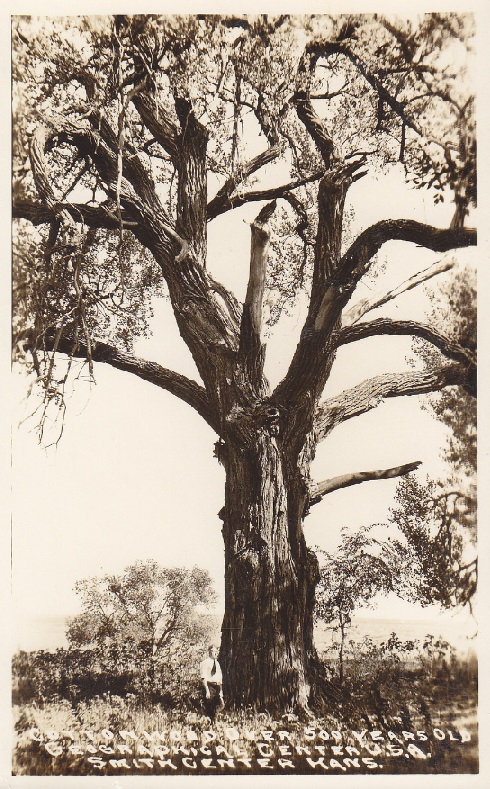 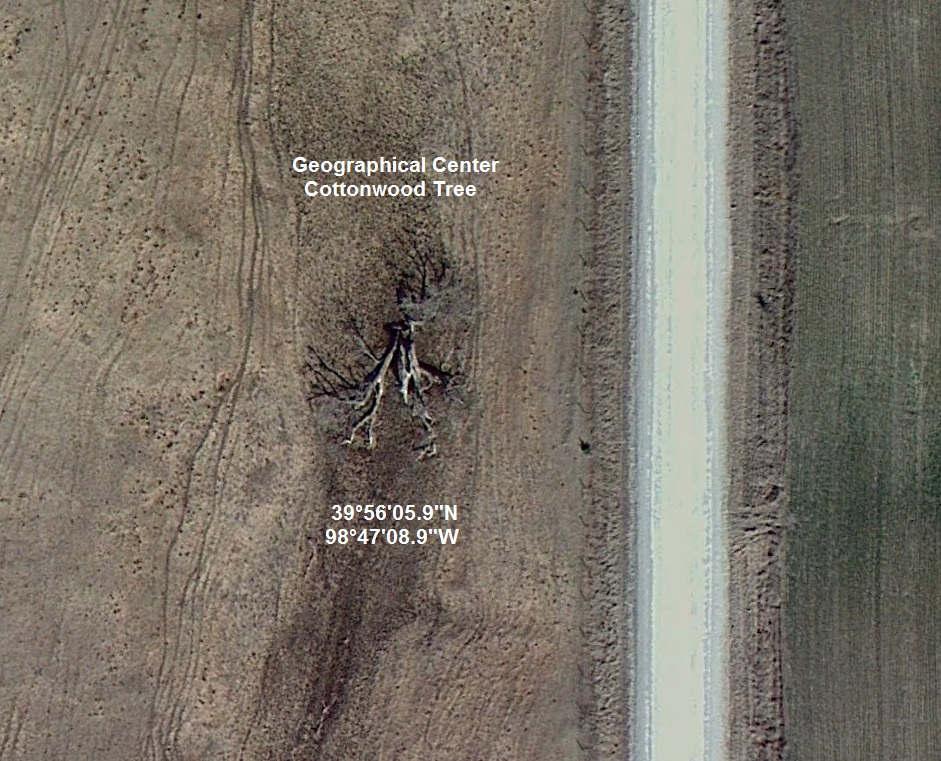 The Cottonwood Tree is now on the ground, but it's historic location is preserved.
Google Earth image. 2/28/2012.

The images below are known postcards from the U. S. Center Motel located along the north side of Highway 36 in Smith Center.
The text below each card is from the backside of that particular postcard. 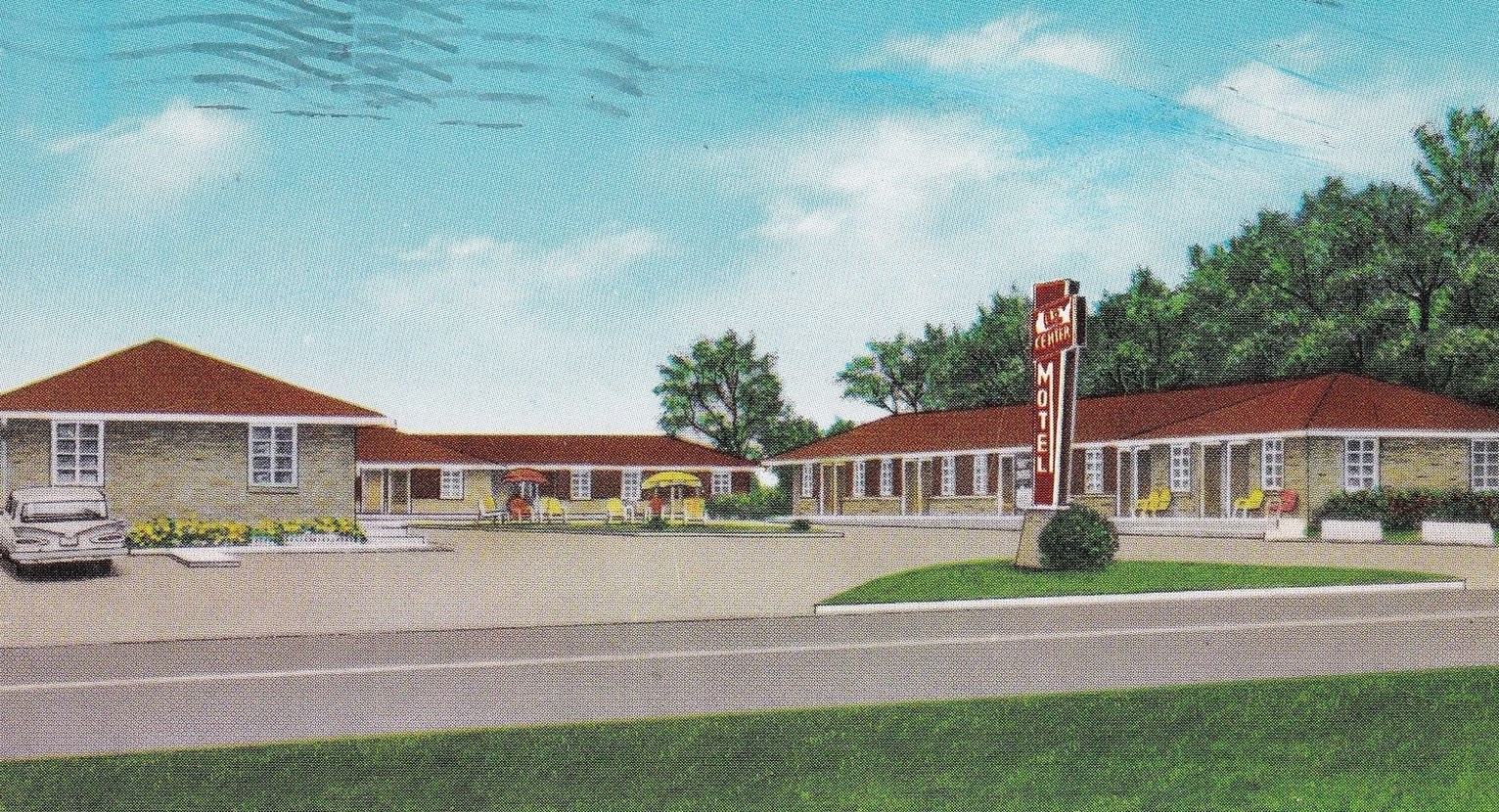 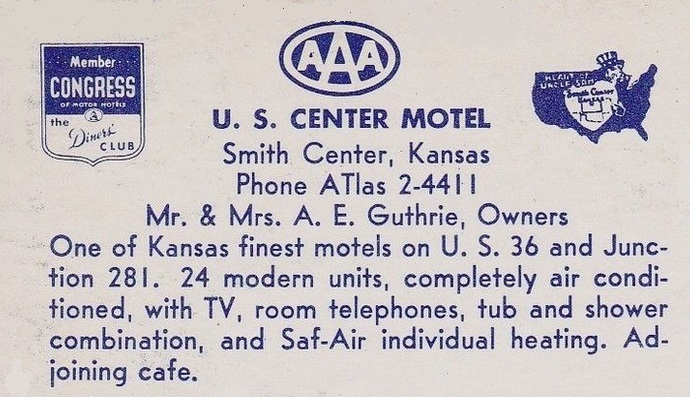 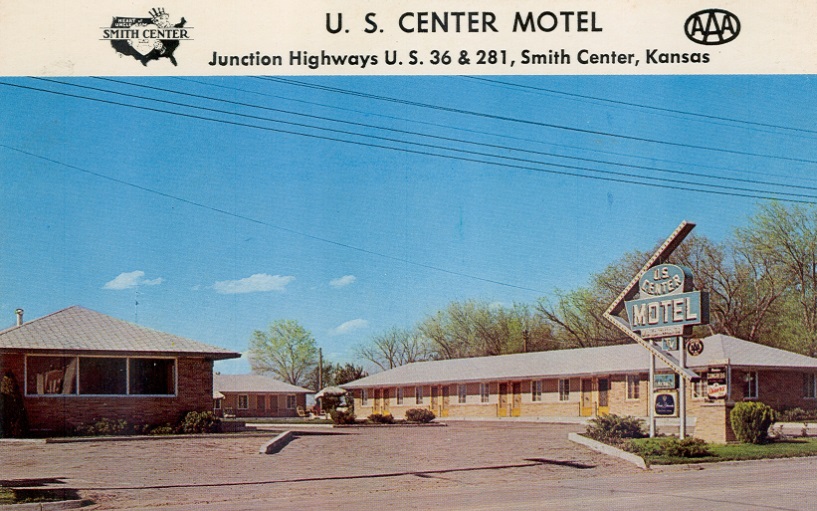 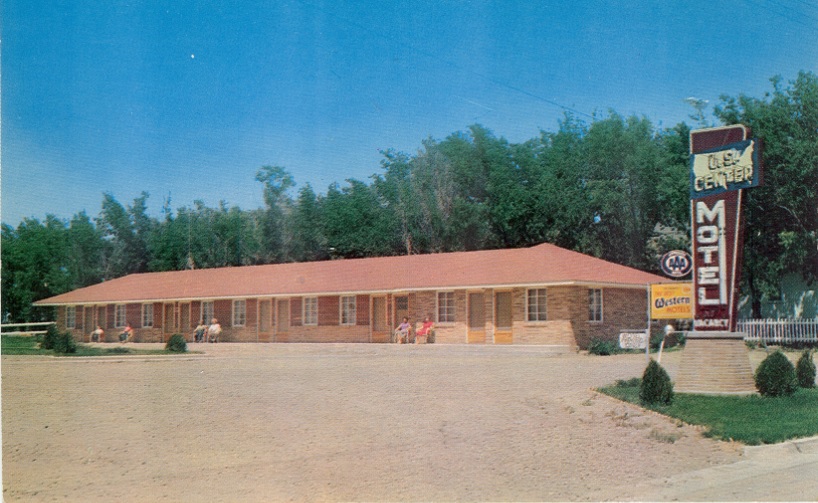 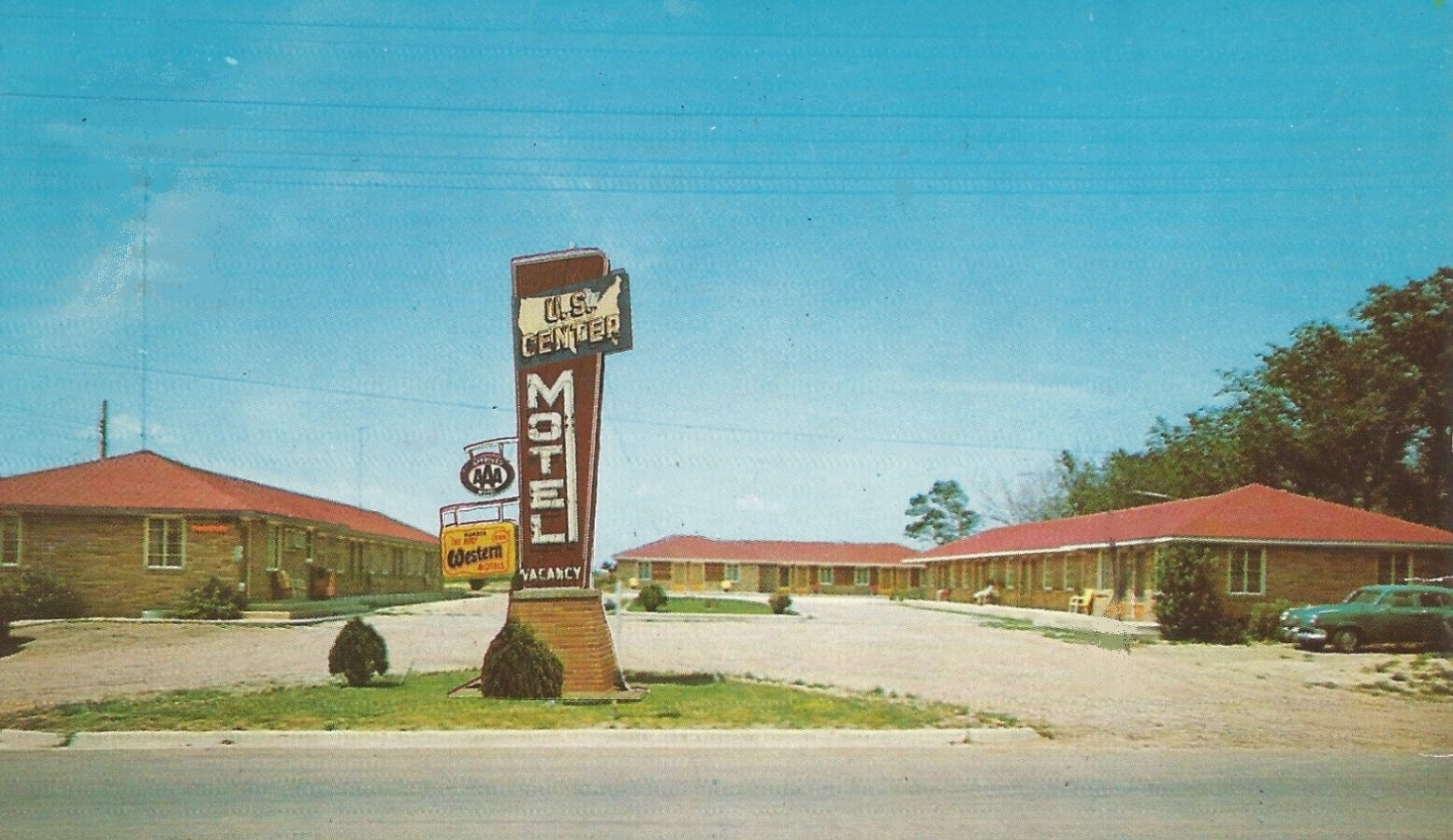 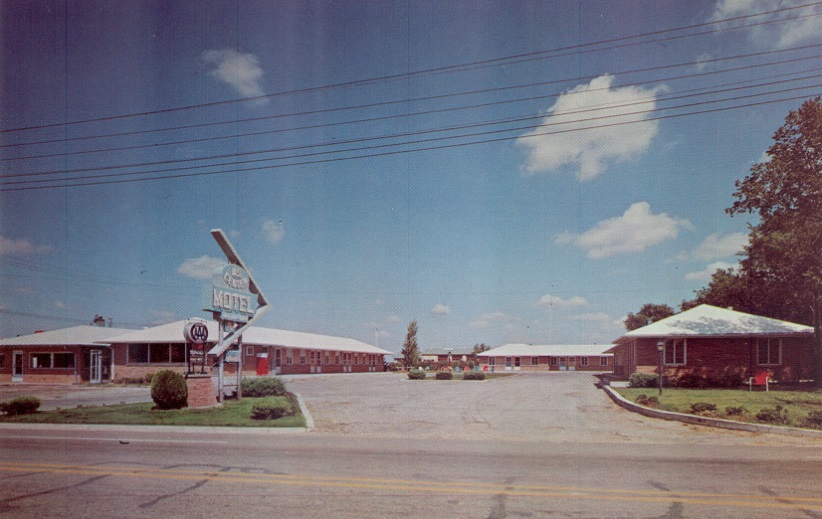 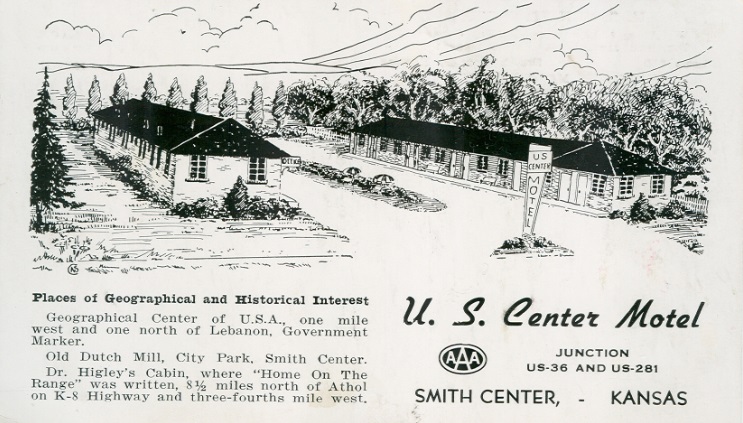 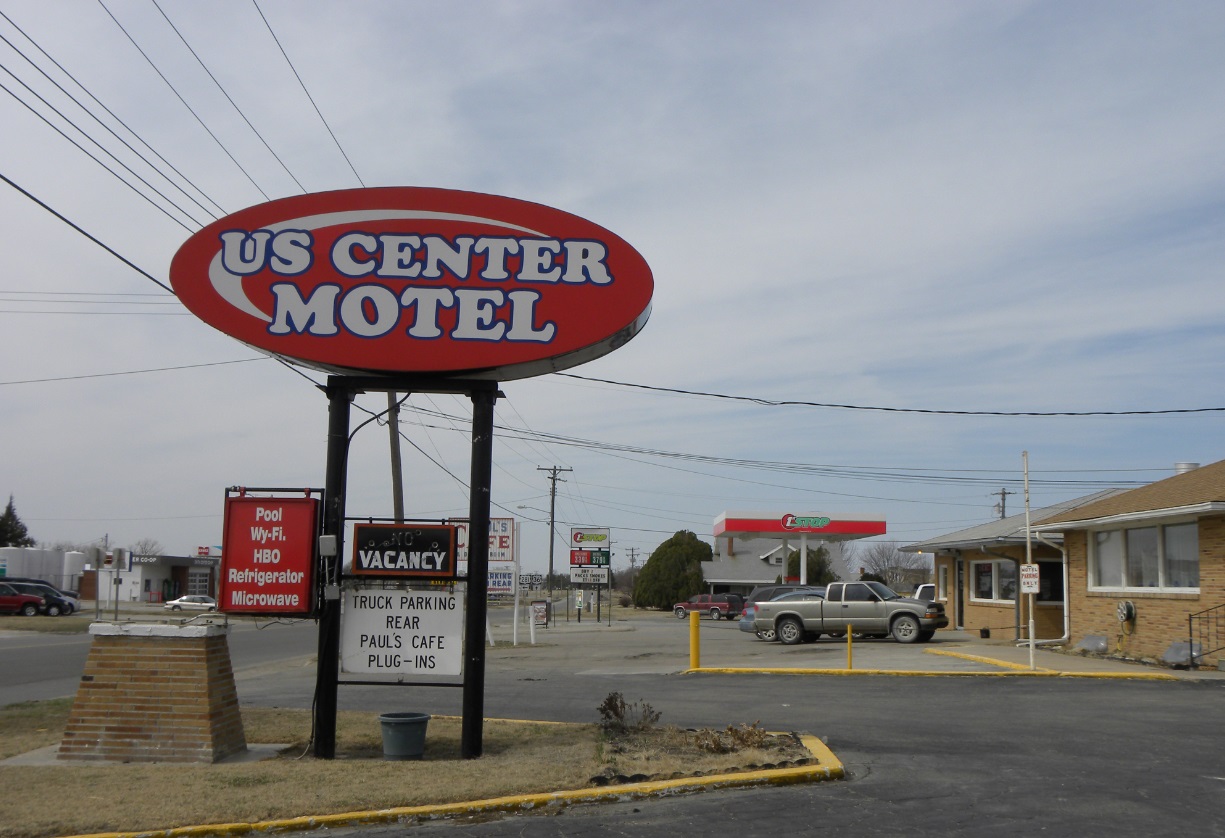 Other items related to the Geographical Center at Smith Center. 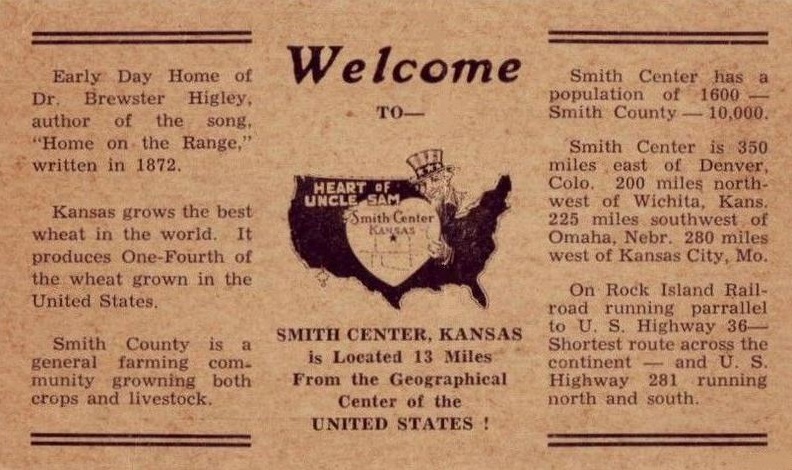 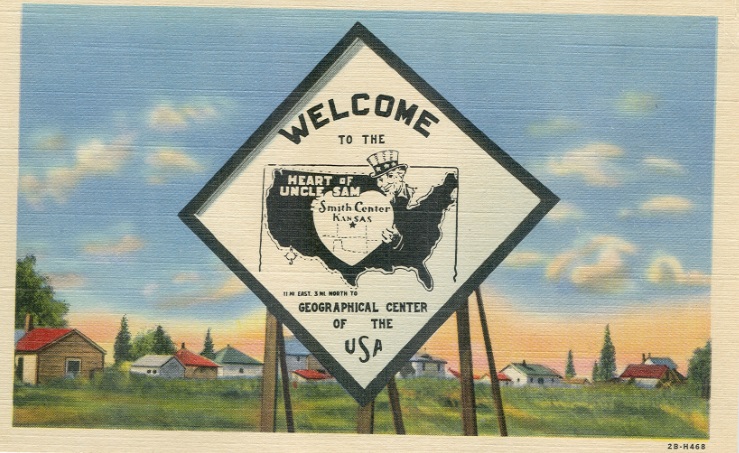 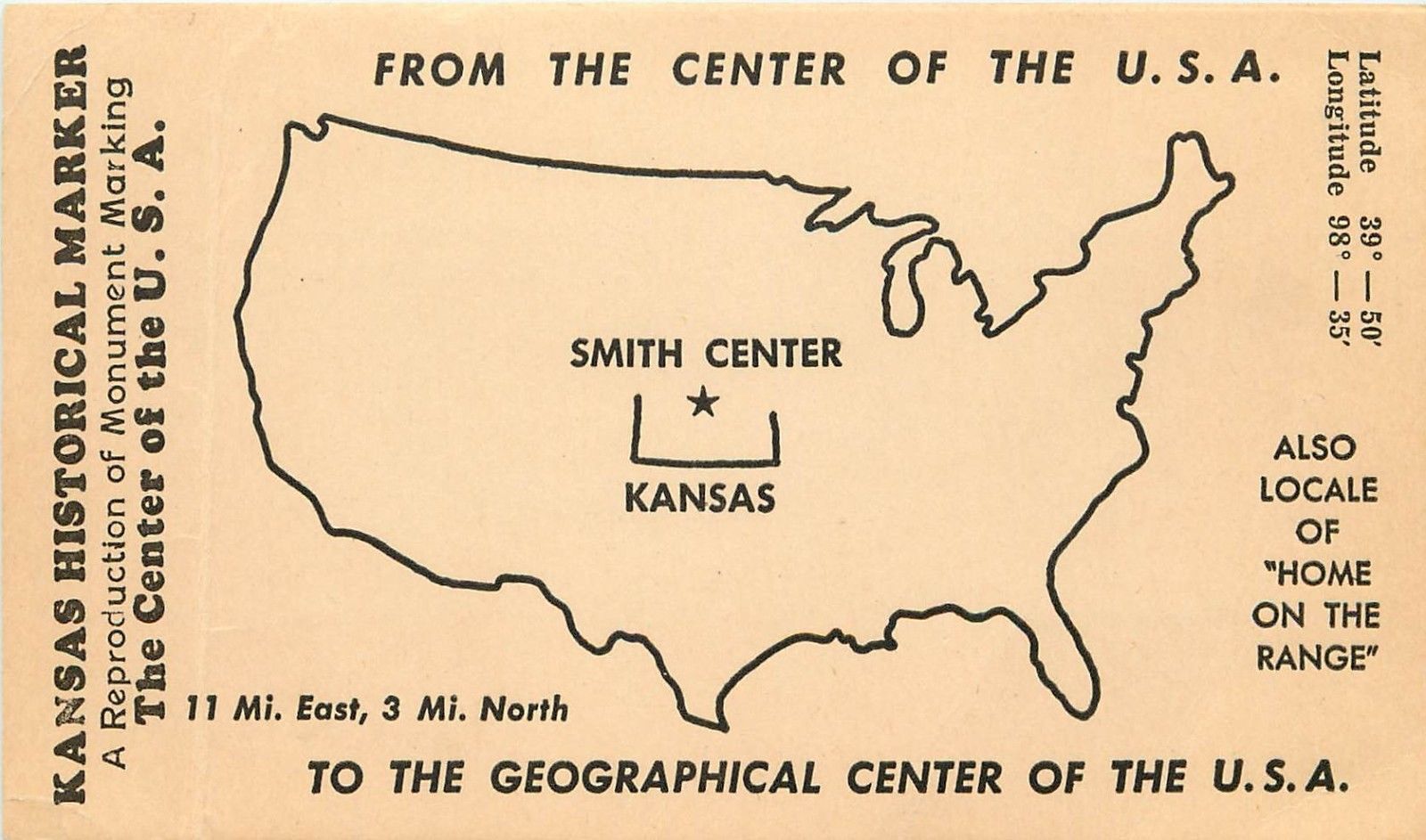