The first attempt at measuring the elevation of Harney Peak occurred during the Custer Expedition of 1874. William Ludlow used a barometer and arrived at the elevation of 9700'. One year later, during the Newton-Jenney Expedition of 1875, Horace P. Tuttle made his own measurements. Tuttle used a Green's mercury barometer, known at that time as one of the best instruments for obtaining elevations of peaks. Tuttle compared his reading with another barometer which was used simultaneously inside the Union Pacific Railroad station in Cheyenne, Wyoming, by another observer. Since the sea level elevation at Cheyenne was known, the difference between the two barometers when added to the known elevation at Cheyenne would give the elevation of Harney Peak. Tuttle's first observation gave him a elevation of 7369.4'. Knowing that this varied significantly from Ludlow's elevation taken a year earlier, Tuttle did another observation which gave him an elevation of 7368.4'. Tuttle's measurements were within one foot of each other. It is assumed that both Ludlow and Tuttle took their measurements on the highest point of rock. Harney Peak has two competing and separate high points which is discussed further down.

Confusion then began to play a role in Harney Peak's elevation due to the delay it took from the time the measurements were made to the time it took to get the results published. In 1877, two years after the Newton-Jenney Expedition, the U. S. Geological Survey of the Territories (a prior organization of the U. S. Geological Survey) published their Fourth Edition of "Lists of Elevations". In this publication, they used the 9700' elevation by Ludlow. The results of the Newton-Jenney Expedition of 1875 were not published until 1880. Private publications began publishing elevations for Harney Peak for which the basis is only speculative. The "Pacific Tourist" guide to the Western States published the elevation of Harney Peak at 7440' in 1877. Another publication titled "Our Western Empire of the New West Beyond the Mississippi River" published an elevation of 7700' in 1881. Bulletin No. 5 of the U. S. Geological Survey in 1884 continued to list Ludlow's elevation of 9700', but Bulletin No. 72 in 1891 changed it to Tuttle's elevation of 7368'.

A significant event occurred in the Black Hills in 1893. The U. S. Geological Survey (USGS) established the first triangulation network in the area where they occupied points on selected peaks. By turning horizontal angles to the points on other peaks while occupying each point, the entire Black Hills was tied together into one network known as the Rapid City Astronomical Datum. This name was given because the initial astronomical work began at Rapid City in 1890. Harney Peak was selected as one of the peaks in which a point was placed in 1893. This point consisted of a 3/4" iron bolt leaded into a drill hole in the rock. It was noted at the time that there were two summits and that the point was placed on the northern most summit. Typically, elevations are also carried during horizontal work and the elevations of peaks could be determined by vertical angle from another peak. The key would be to have an elevation established on one of the peaks as a starting point which would not be easily accomplished. At the time of the 1893 survey, there was no established vertical datum in the Black Hills, so any derived elevations through triangulation would have been on an assumed basis. 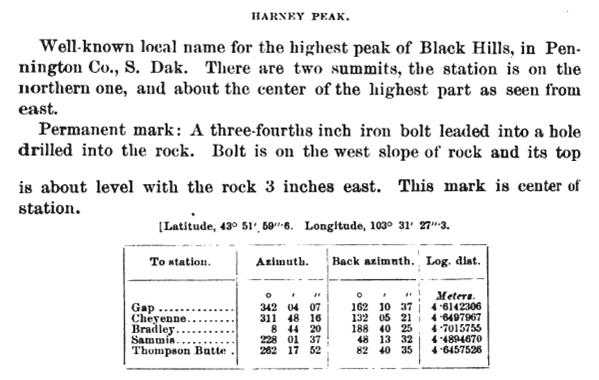 Text from the 1893 triangulation survey when a point was established on Harney Peak. 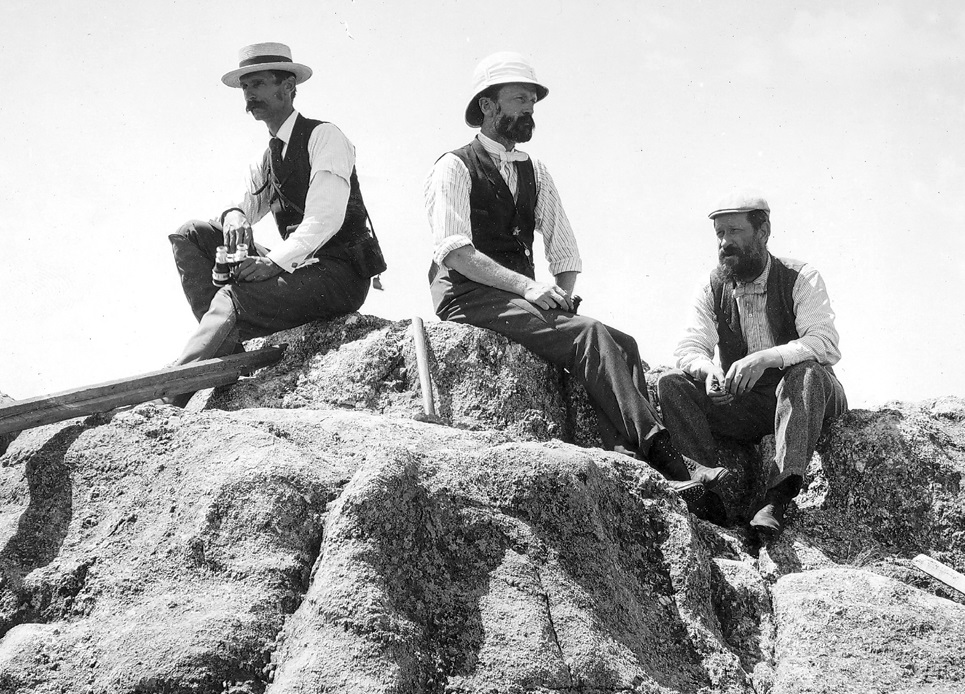 Members of the U. S. Geological Survey pose atop Harney Peak in 1893.

In 1893, USGS surveyed parts of the Black Hills in order to produce topographical maps. The first map of the Harney Peak area was published in 1896 and was named "Harney Peak". The scale was 1:125,000 and this map was known as a 30-minute quadrangle sheet since the perimeter of the map or "quad" was bounded by 30 minutes of latitude and 30 minutes of longitude. This became the first accurate map of the area. The elevation noted on the quad at Harney Peak was 7215'. A perplexing question remains as to how this elevation was derived. Was it through triangulation using an assumed vertical datum or was this a mistake? As previously mentioned, Bulletin No. 72 of the U. S. Geological Survey in 1891 listed Harney Peak as 7368' which was Tuttle's determination. Ironically, the same publication listed Terry Peak as 7215' which was the same elevation that was placed on the 1896 quad for Harney Peak. Was an error made by mistakenly placing the elevation for Terry Peak on the map for Harney Peak? There seems to be strong evidence that this might have been the case. If this was a mistake, it had to have been one of the more notorious mistakes of USGS in that era.

U. S. Geological Survey Bulletin No. 72 published in 1891 with elevations from the Newton-Jenney Expedition.

U. S. Geological Survey 1896 quad (surveyed in 1893) showing an elevation of 7215' for Harney Peak.
Was this an error and the elevation instead that for Terry Peak?

The next significant event came in 1896 when USGS established their vertical datum in the Black Hills. Through discussion with officials of the Fremont, Elkhorn & Missouri Valley Railroad at Deadwood, they adopted the railroad's bench mark at the depot as being the best available evidence of a true sea level elevation. From this railroad bench mark, USGS established what became known as the "Deadwood Datum". The entire Black Hills was topographically mapped using this vertical datum and hundreds of permanent bench marks were placed. In 1897, the USGS survey crew doing triangulation returned to the Black Hills and densified the horizontal network by using both existing points and additional ones. Located 10.6 miles west of Harney Peak is Bear Mountain, a location for one of the 1897 points. From this peak, the point previously established in 1893 on Harney Peak was sighted. Almost assuredly, USGS utilized vertical angles during the 1897 triangulation which tied the points on the triangulation network vertically to the Deadwood Datum. There are two peaks in the Black Hills which could have been easily reached by leveling crews in order to establish an elevation on a triangulation point. One is Bear Mountain and the other is Crow's Nest located 16.8 miles northwest of Bear Mountain. Both peaks were near to level runs, so it seems very possible that the elevations of peaks in the Blacks Hills originated from one of these points. Harney Peak was tied in from points on both peaks during the 1897 triangulation. 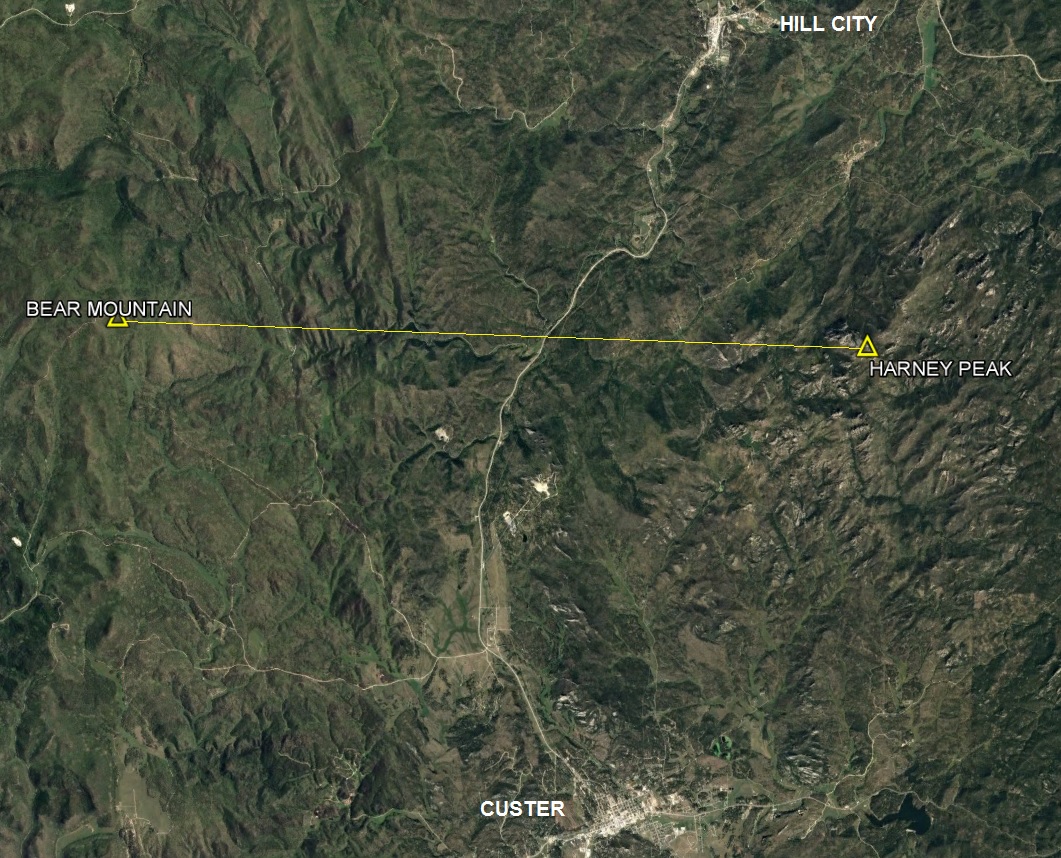 Bear Mountain, located 10.6 miles west of Harney Peak, is the most likely location from which the elevation of Harney Peak was determined by vertical angle to establish the 7240' elevation. - Google Earth image. 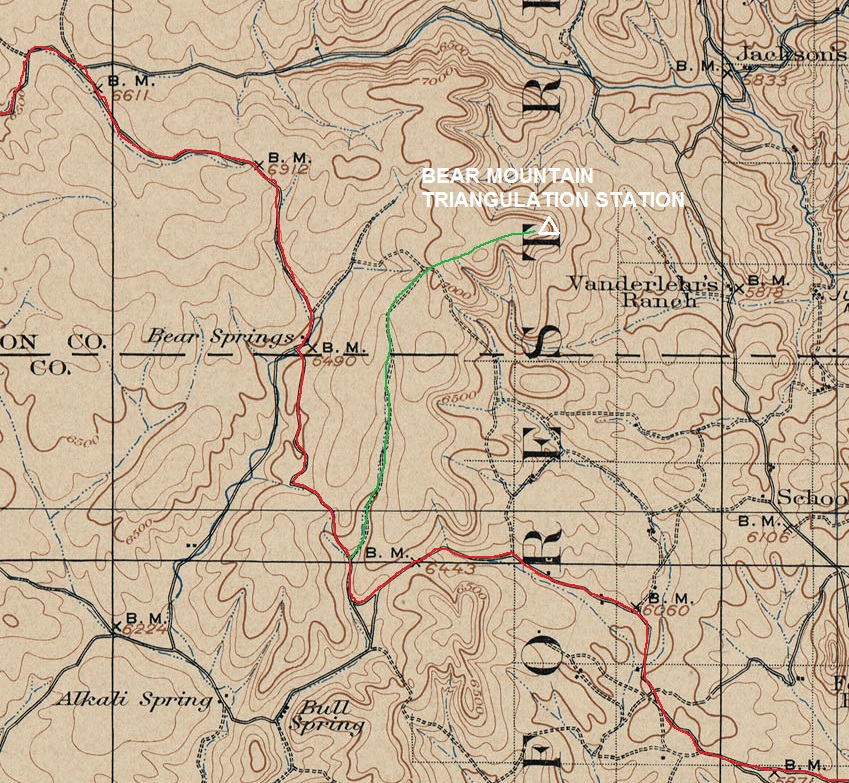 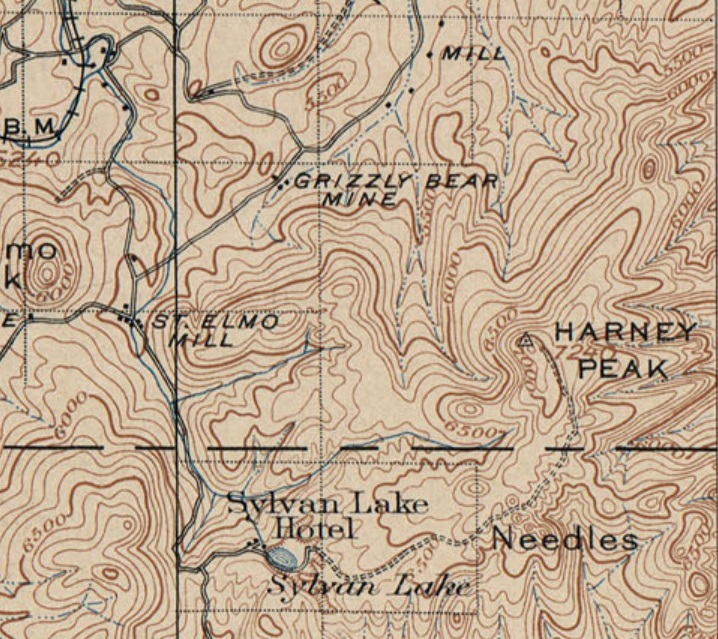 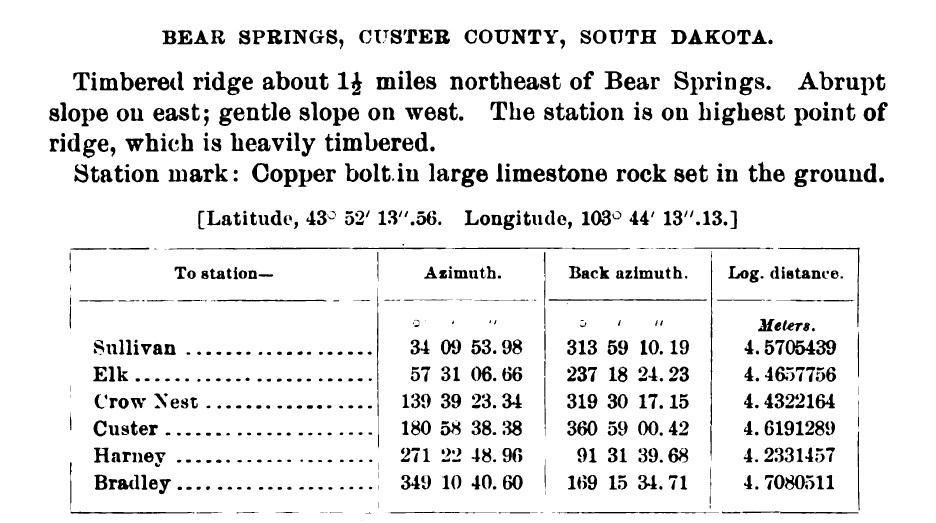 "Bear Springs" was the name of the triangulation station on Bear Mountain from which the vertical angle was likely made to Harney Peak in 1897.
The log distance of 4.2331457 meters between Bear Springs and Harney converts to 56,121.58 feet or 10.63 miles.