With the establishment of the Deadwood Datum in 1896, elevations throughout the Black Hills were tied to a sea-level based vertical datum. With the use of trigonometry, the elevations of peaks could be determined by vertical angle and their elevations would be the more accurate than ever. It is assumed that the elevation measured for Harney Peak during the trigonometry survey of 1897 was marked upon the iron bolt placed in 1893 during that survey. In 2010, Kurt Luebke and Jerry Penry determined that the location of the 1893 point now resides where the current tower is built. The two surveyors have located many historical points throughout the Black Hills and have calculated a horizontal shift to apply so the historical latitude/longitude of a particular point can be determined today.

The second topographical quad map issued by the U. S. Geological Survey (USGS) for the Harney Peak area was in 1901. These maps also list the date the surveying was performed. In the case of the 1901 map, the surveying was done in 1897. The contours on the 1901 quad, when compared to the 1896 quad, widely vary which gives credence to the assumption that much of work on the 1896 quad was more of an estimation rather than survey accurate. The elevation on the 1901 quad lists Harney Peak as 7240' which is the first known reference to that elevation. Some publications, however, such as the Bulletin of the American Geographical Society continued to show an elevation of 7216' as late as 1908. Most of the elevations that appear for Harney Peak in publications are merely copied from previous publications and therefore hold little weight regardless of the significance of the agency that published the elevation.

The next major event regarding elevations came in 1908 when the U. S. Coast & Geodetic Survey (USC&GS) finally reached the southern portion of the Black Hills. This agency brought precise sea-level based elevations across the United States from the East Coast. As the USC&GS surveyors ran their precise level lines along the Chicago, Burlington & Quincy Railroad through Edgemont and toward Newcastle, they were able to utilize 23 bench marks previously established by USGS in 1897-98. By establishing their own elevations upon the USGS bench marks, USC&GS was able to know the difference between their precise datum and the Deadwood Datum established by USGS. The difference was around 4.3' with the Deadwood Datum being lower than the datum of USC&GS. 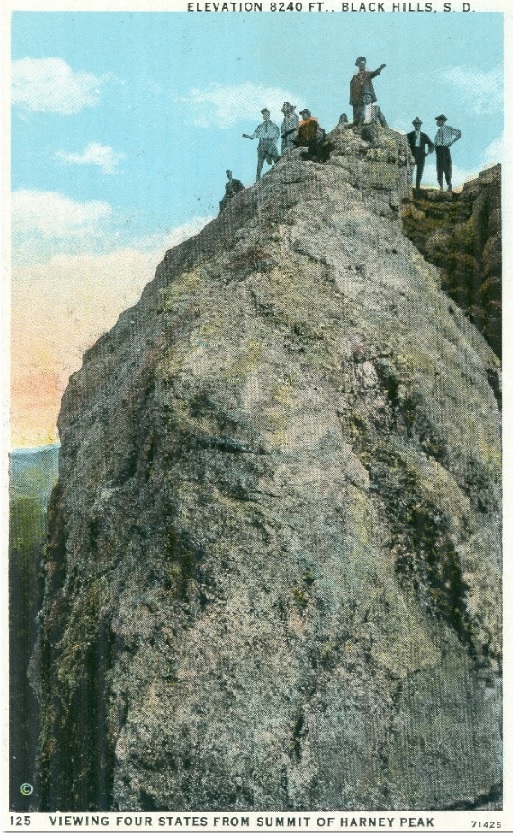 Harney Peak before the lookout towers were built. - Collection of Jerry Penry.
Note the elevation of 8240' which is 1000' off.

Applying just one shift to all of the Deadwood Datum bench marks across the Black Hills would not mathematically work due to abrupt changes in elevations and other geodetic factors. For reasons not quite easily understood, USGS adjusted their Deadwood datum by adding only 1.400 feet to it in order to be closer to the USC&GS datum. Upon reaching the West Coast, USC&GS adjusted their entire network across the United States in what they called their Fourth General Adjustment in 1912. The results of this adjustment lowered the combined USGS/USC&GS bench mark at Edgemont by 2.075 feet. USGS then decided that a shift of 2.200 feet should be added to their starting bench mark at Deadwood.

The next quad sheet of the Harney Peak area issued by USGS came in 1913, the surveying, however, was still based upon the work done in 1897 and only updated certain prominent features. The adjustment of 1912 came too late to adjust the elevations on the quad, so they remained the same and the elevation for Harney Peak on the 1913 quad remained at 7240'.

The adjustment of 1912 and how it affected the Deadwood Datum, however, was well known within USGS. A press release that appeared in the Washington Post on March 31, 1912, stated that Harney Peak had an elevation of 7242'. Similarly, the USGS Bulletin No. 643 "Spirit Leveling in South Dakota" published in 1916 also has the 7242' elevation listed for Harney Peak. Unfortunately, by this time the first Lookout Tower had been built upon Harney Peak. It destroyed the survey point placed in 1893 and thus ended any opportunity to make a check upon a point that no longer exists.