Shown on many early Nebraska maps is what appears to be a town by the name of "Survey" in southwestern Cherry County. The location was actually a series of individual ranch houses alternately designated as a post office where people living in this rural area could pick up or deliver their mail. A rancher would agree to have a room in his house set aside as the post office and a member of the family became the postmaster. When a rancher moved or could not resume the role as postmaster, the post office would relocate to another nearby ranch house. In early-day Nebraska there were hundreds of these single house post offices. Survey had its own postal cancellation that was stamped on outgoing mail.

The Survey Post Office was first established at the John C. Jones Ranch on January 19, 1909. It then moved four times, but always stayed in the same general area. After leaving the Jones ranch house it then went to the ranches of Frederick G. King, Allen N. Barker, and to two different houses of Clarence V. Grouns. Early settlers remember the postmaster by the name of "Greasy Grouns" due to his infrequent bathing. The Survey Post Office ended on June 30, 1934. 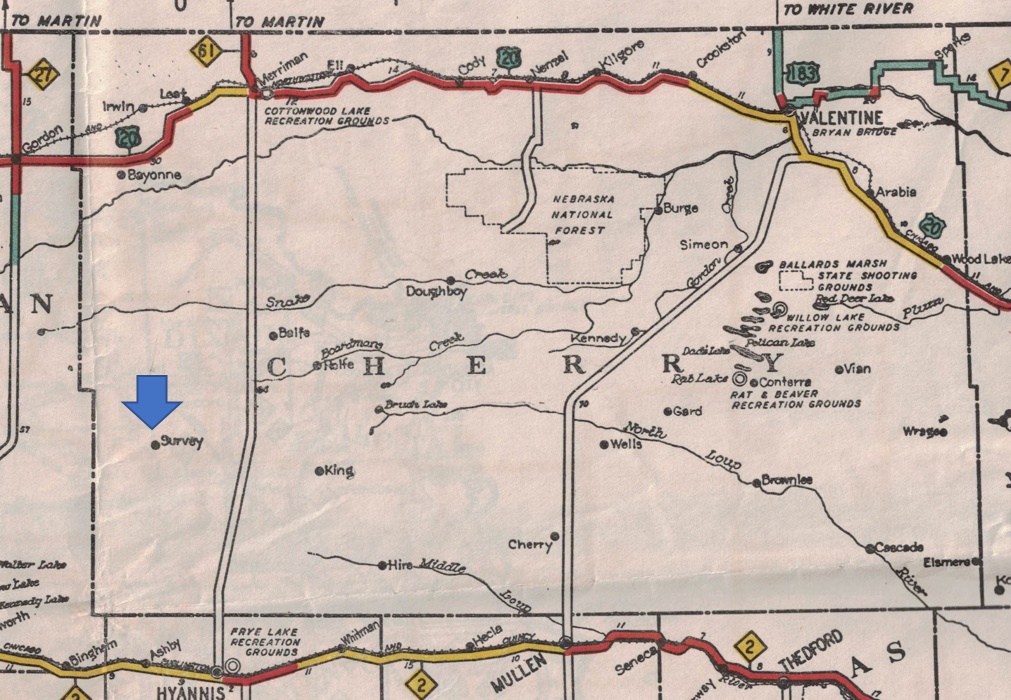 The location of "Survey" as shown on the 1934 Nebraska highway map.


The name for the post office originates from "Survey Valley" which extends over 40 miles in an east-west direction through the Sandhills. The majority of the valley is in Cherry County with the western 10 miles in Sheridan County. Exactly when the name was first associated with the valley is uncertain.

Around 1891, the Pacific Short Line Railroad surveyed a route to extend their line from O'Neill, Nebraska, to Ogden, Utah. The Pacific Short Line was the name given to this particular line between Sioux City and O'Neill that was owned by the Nebraska & Western Railroad. Historians believe that the railroad surveyors had found this natural valley which would have been an ideal passage through the otherwise difficult terrain of the Sandhills. The railroad was never extended west of O'Neill, but the name stayed. Several histories have erroneously stated that this surveyed route was connected to the Burlington Railroad. The Chicago, Burlington & Quincy Railroad, did however, acquire the railroad to O'Neill in 1907, but nearly three decades after the Pacific Short Line had surveyed the route to extend further west. 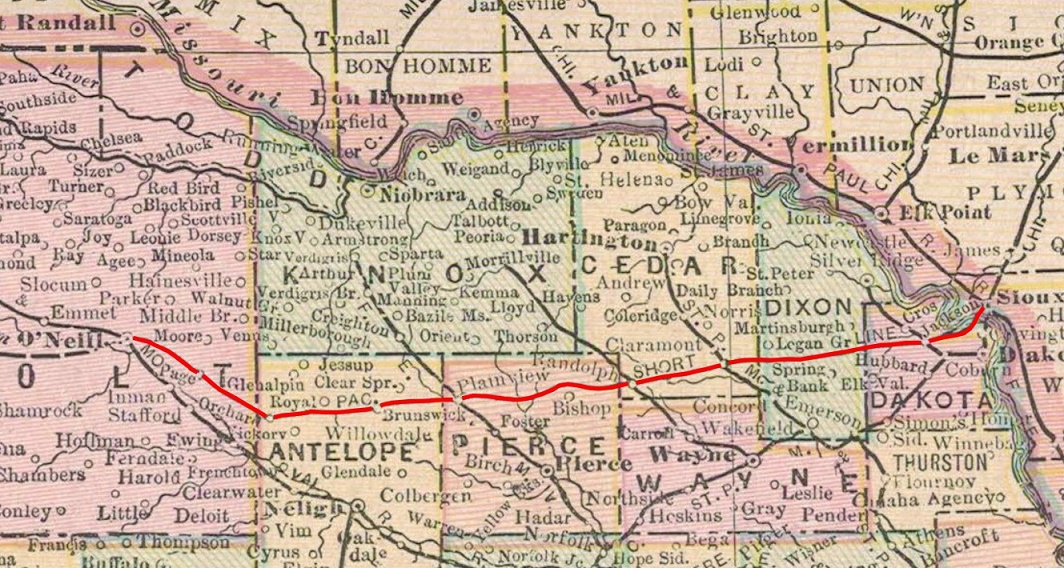 The location of the completed Pacific Short Line Railroad between Sioux City and O'Neill.

The location of the proposed Pacific Short Line Railroad (dashed line) that was to extend to Ogden, Utah.
The location of "Survey Valley" is indicated in red on the map.

Whether the "Survey Valley" name first originated with the railroad survey is highly debatable since no early maps exist that show this name upon them. The most plausible reason for the name is the fact that between the era of 1908-1920 many government surveyors were in the area attempting to fix the problems that were created from shoddy work done by the government contract surveyors of the 1870's. Homesteads in this area that were mostly created after the passage of the Kinkaid Act in 1904 were notoriously in the wrong locations. At great expense and sometimes court litigation, the tracts were resurveyed. Undoubtedly, before the government became involved, there were land locators, county surveyors, and private surveyors attempting to figure out the mess. The federal government and the State of Nebraska surveyors often disagreed as to how the surveys should be performed. The presence of the many surveyors could very well be the reason for the "Survey Valley" name. 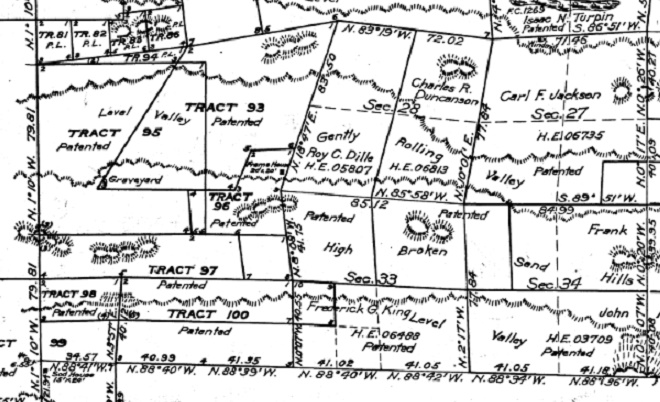 Government surveyors worked for nearly a decade trying to sort out homesteads that were in wrong locations throughout Survey Valley.


With the establishment of the Survey Post Office in 1909, the name can be traced back at least that far. In 1946, U. S. Coast & Geodetic Surveyors established a triangulation station in the area and appropriately named it "SURVEY". A one-room country school was not far from the Survey Post Office and was locally known as the "Survey School". It has long since been abandoned. One local resident who came in 1970, stated that the school was already abandoned at that time. 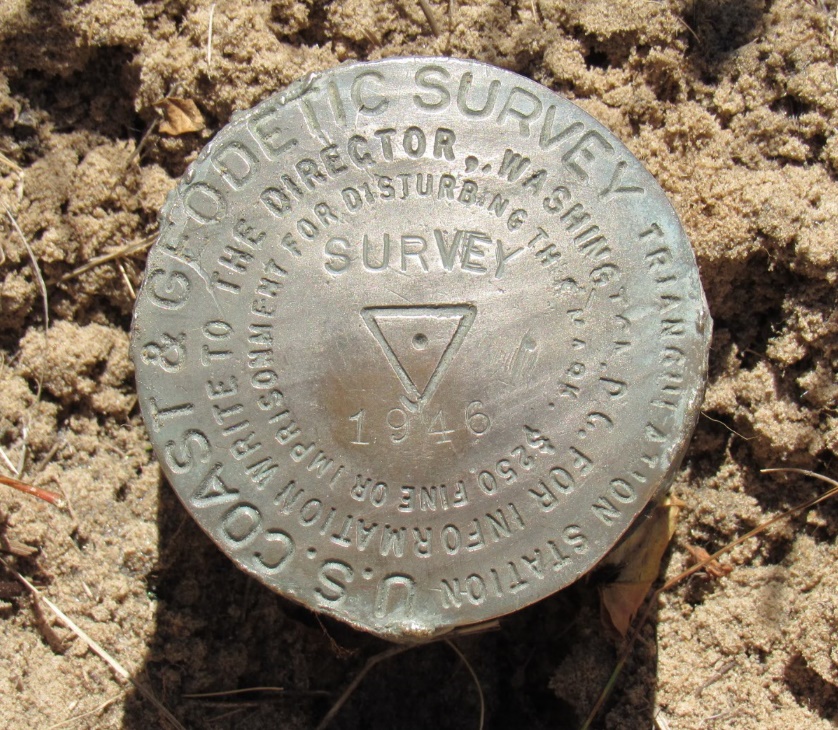 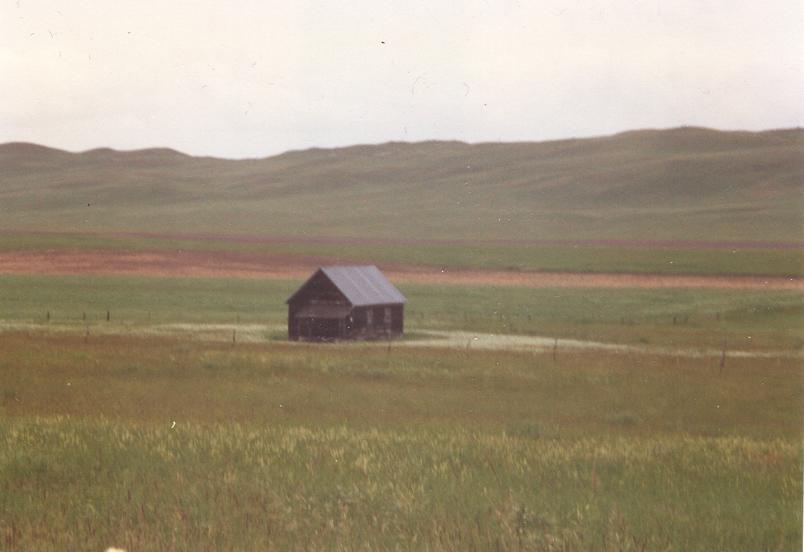 The abandoned "Survey School" was a one-room country school. This is how it appeared in 1996. 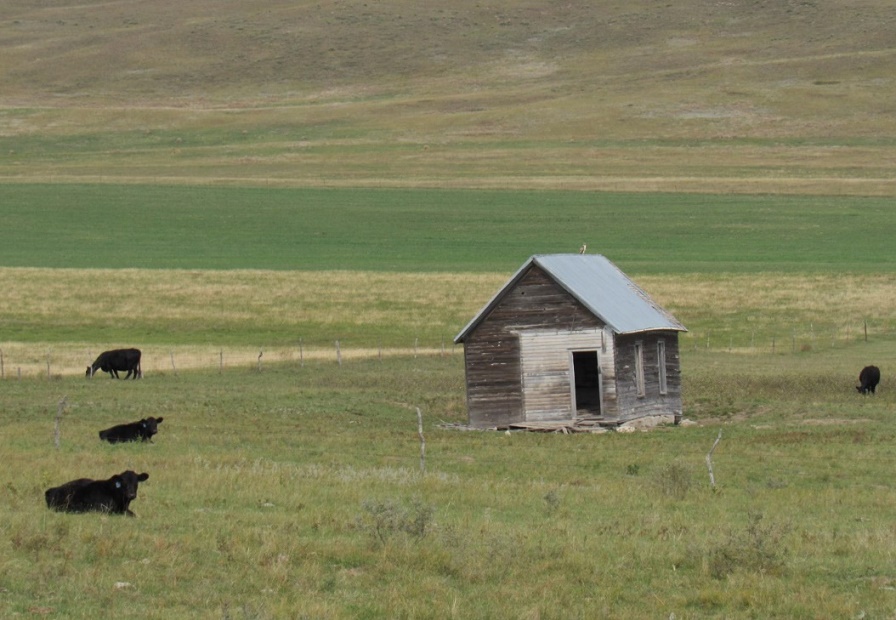 The abandoned "Survey School" as it appeared in 2017.

By the late 1920's, many of the homesteaders had given up trying to make a living in the Sandhills which has proven to be mostly fit for cattle grazing. The tracts that were created by the government surveyors were sold by the homesteaders to ranchers who were more than willing to increase their property and form large ranches. By the time the post office closed in 1934, houses were spread many miles apart and keeping a post office open for a small number of people could not be justified. Today the ranches are served by rural delivery.

Survey Valley Road is a one-lane trail that winds through Survey Valley for 26.5 miles between Highway 61 and 27. The eastern 15 miles is mostly sand or gravel while the western 11.5 miles is a narrow asphalt paved road. Parts of the road enter into another area known as Ideal Valley. The Survey School building is located 10 miles from the road's eastern end and sits about 150 yards to the north. Approximately 500 yards north-northeast of the school is a group of trees where the King Ranch was once located and the final location for the Survey Post Office. 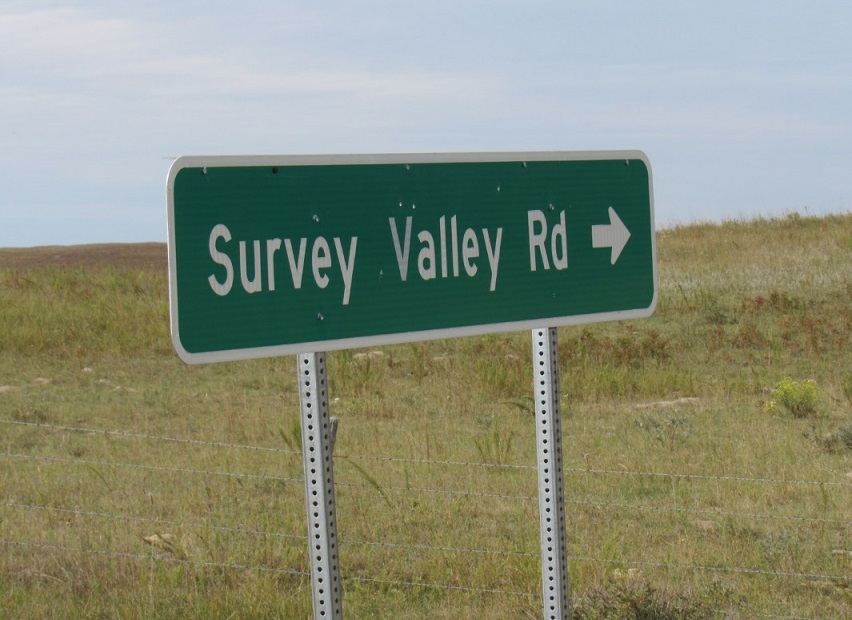 Highway sign at the entrance to "Survey Valley Road" off Highway 61 on the east end.


On the extreme eastern end of Survey Valley is a cemetery located in a meadow on the Curtis Ranch. There are 11 marked graves and there is thought to be many others that do not have markers. The dates on the marked graves range from 1892-1914. The final burial was for George R. Lackey, a 52-year-old rancher who died on July 16, 1914. This land was homesteaded by Samuel H. Dye. 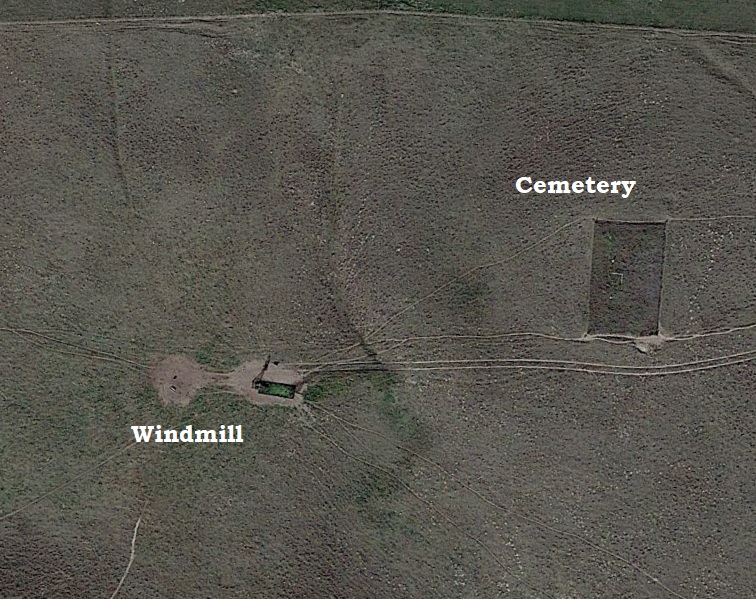 The Curtis Cemetery in the eastern portion of Survey Valley in Section 6, T27N, R36E.


In 2013, a historical marker sign was placed along the west side of Highway 61 at a location 400 yards north of the eastern entrance to Survey Valley Road. Unfortunately, this sign was poorly researched and contains errors which are explained below the image.

The historical marker sign placed in 2013 along Highway 61. There are several significant errors in the text. The railroad was not the Burlington and Missouri River Railroad, but instead the Pacific Short Line Railroad. It was not trying to reach Alliance, but rather Ogden, Utah. The date of 1887 is too early and should be 1891 when surveyors went west from O'Neill. The cemetery was not on John W. Shackelford's homestead, but instead on Samuel H. Dye's homestead. Shackelford's homestead was over 10 miles to the west from the cemetery. It is not located in Sec. 16, T27N, R38W, but rather in Sec. 6, T27N, R36W. The marked graves include 6 children and 5 adults. The interrment dates are between 1892-1914 and not 1910-1917. There are also unmarked graves in this cemetery.

The article in the link below was published in the December 2017 issue of The American Surveyor magazine. 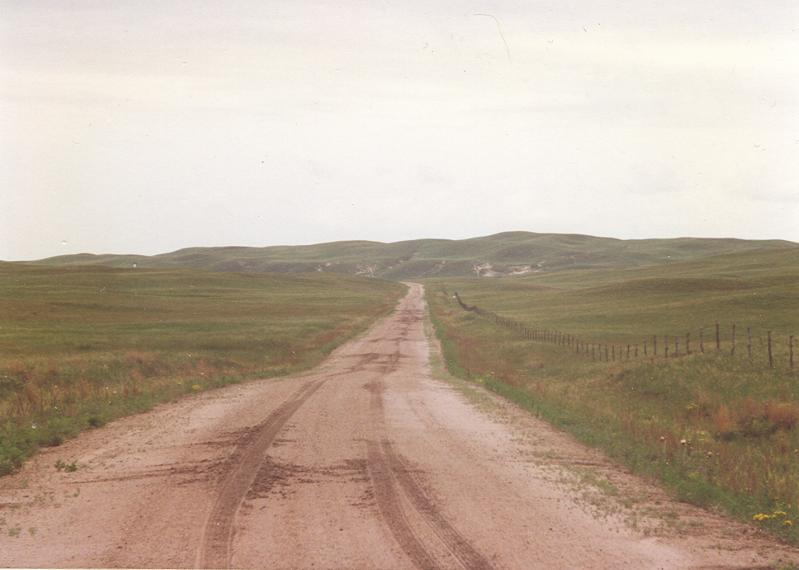 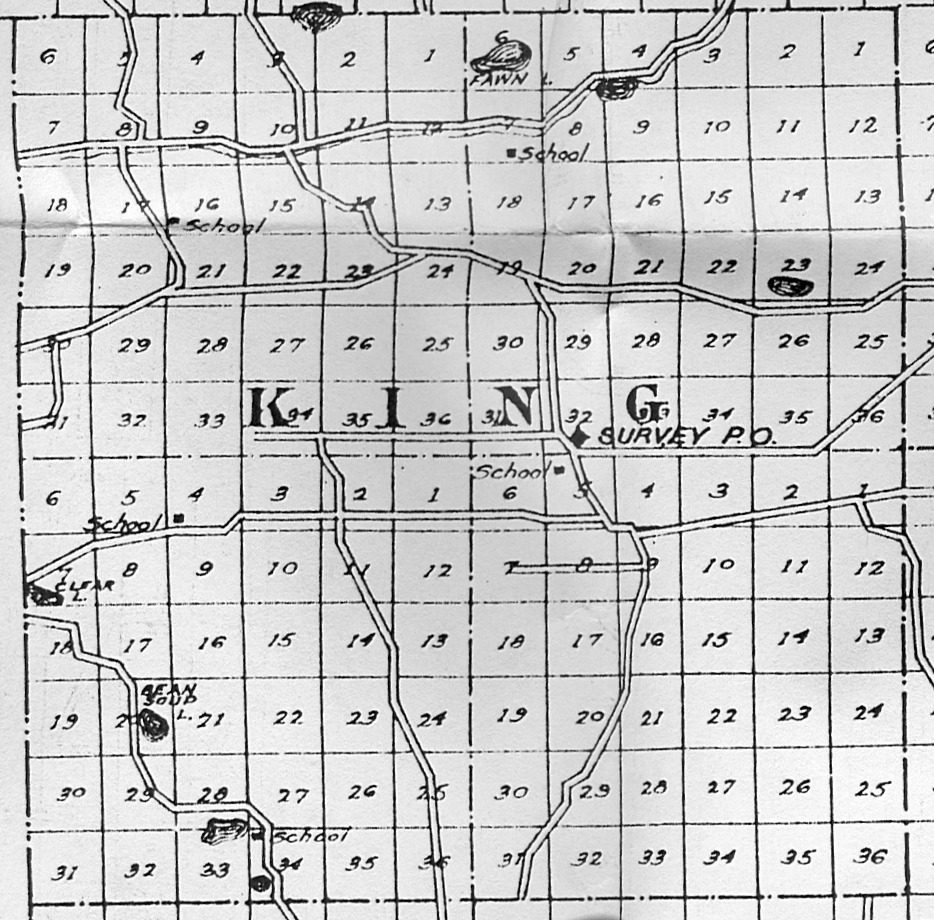 The one-lane road that stretches between Highway 61 and 27 is known and marked as "Survey Valley Road". The location marked "K. King Ranch" is the last location for the Survey Post Office. 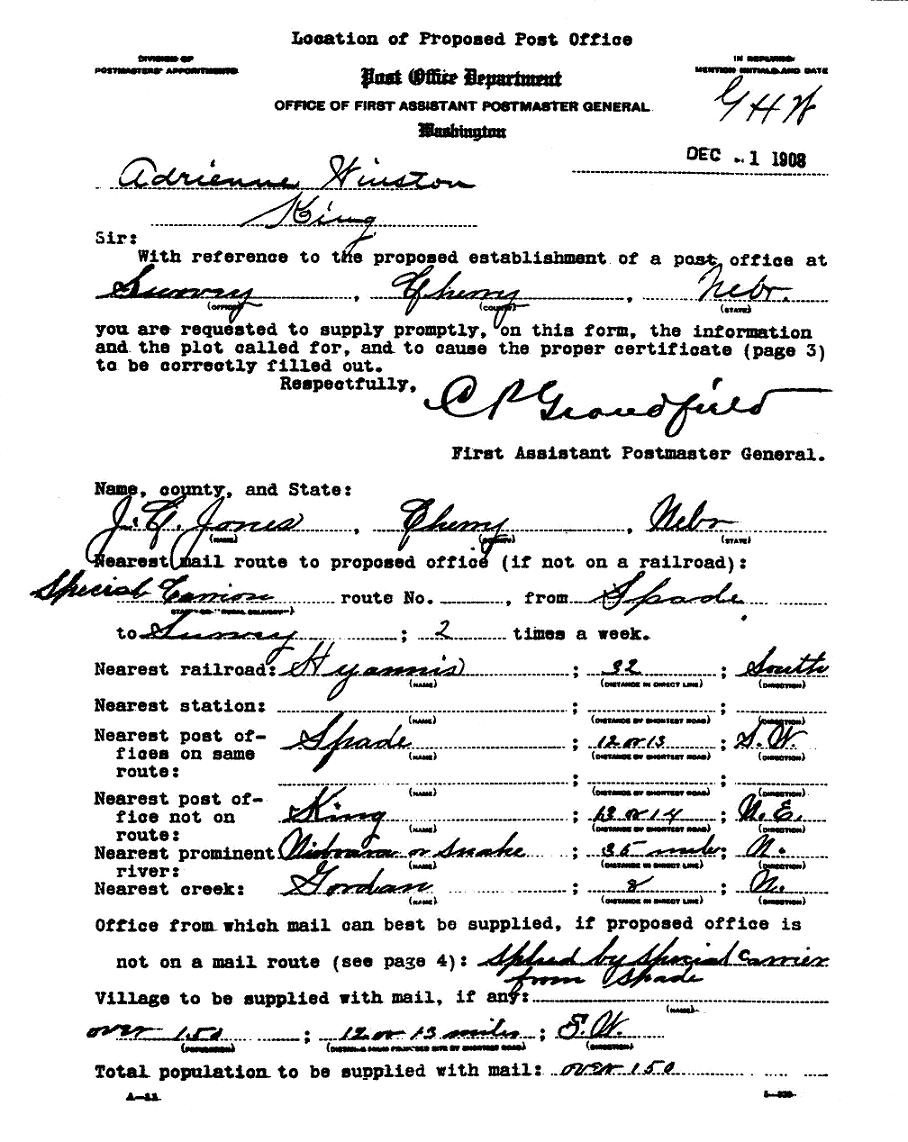 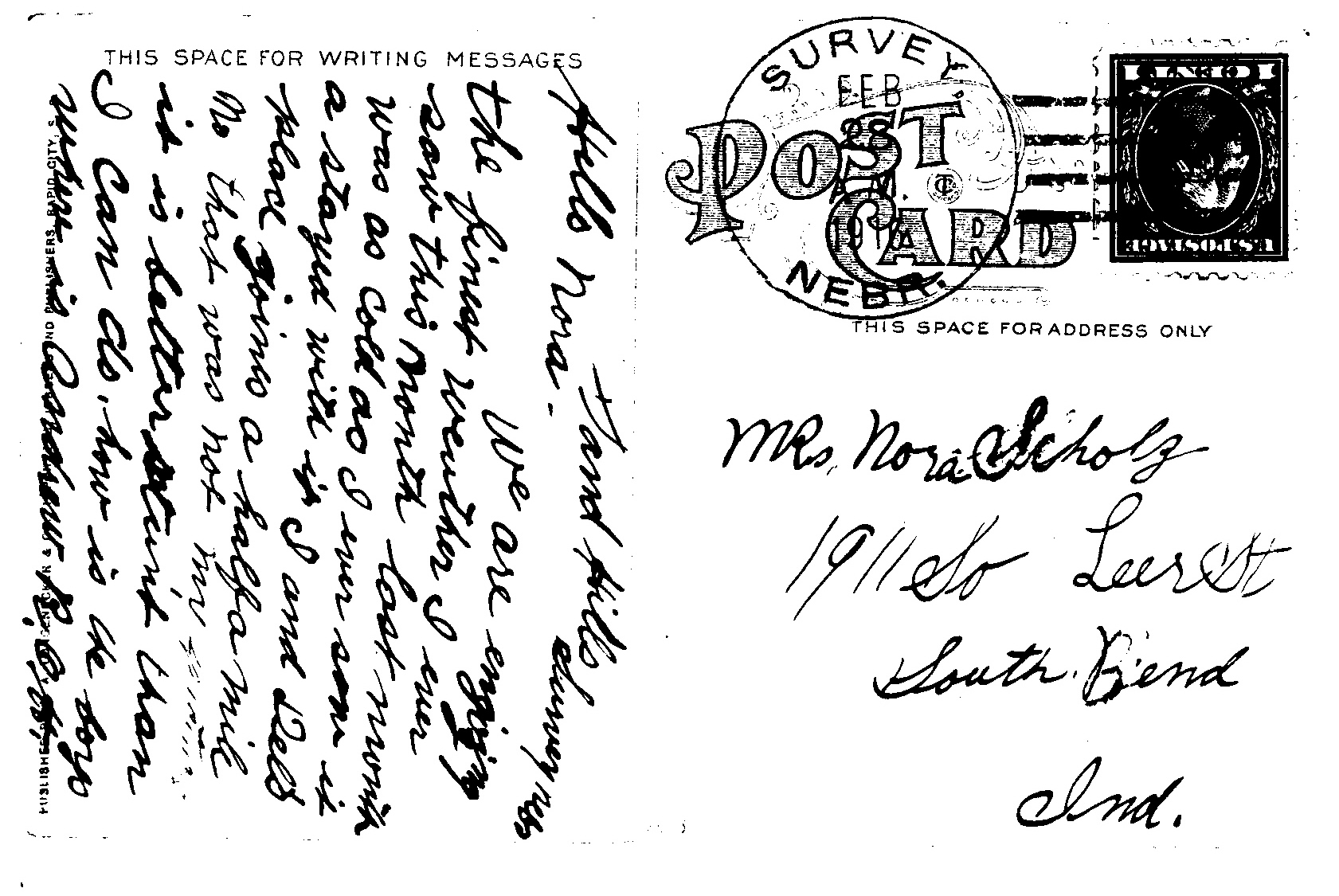 The back of a postcard canceled at the Survey Post Office.

OIL COMPANY ROAD MAPS
These maps show what appears to be the town of "Survey".
The differing locations of the roads over the years were only sand trails and not improved. Most have long since disappeared. 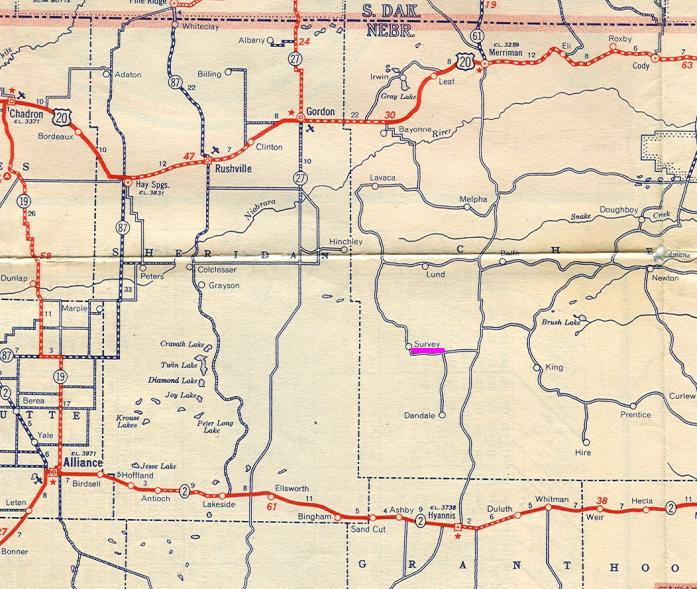 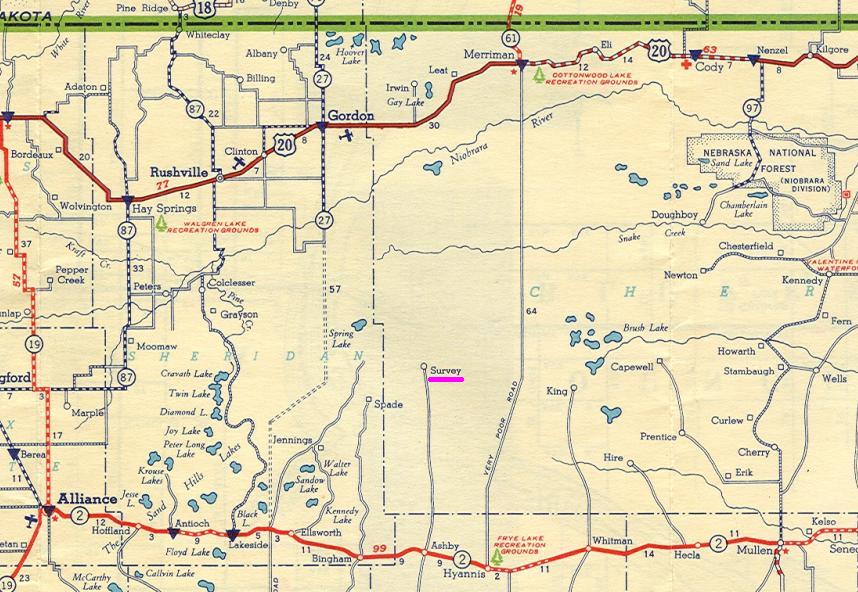 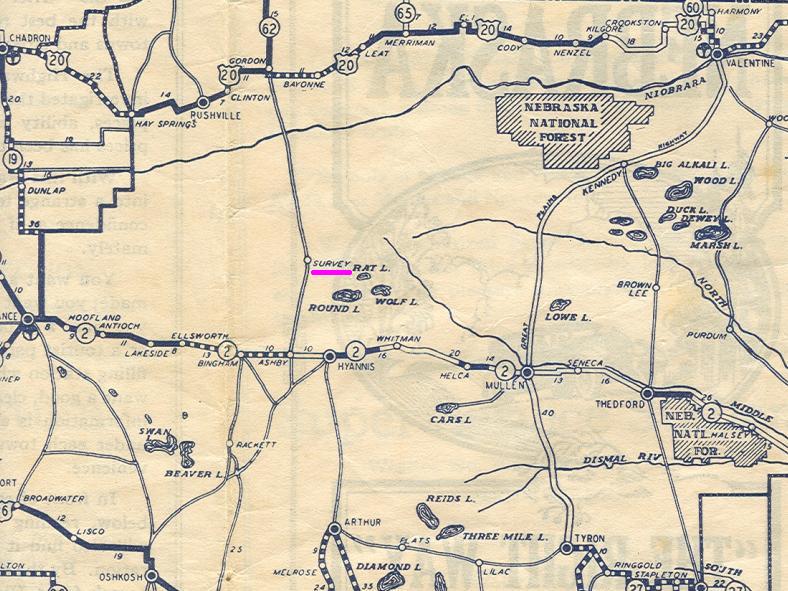 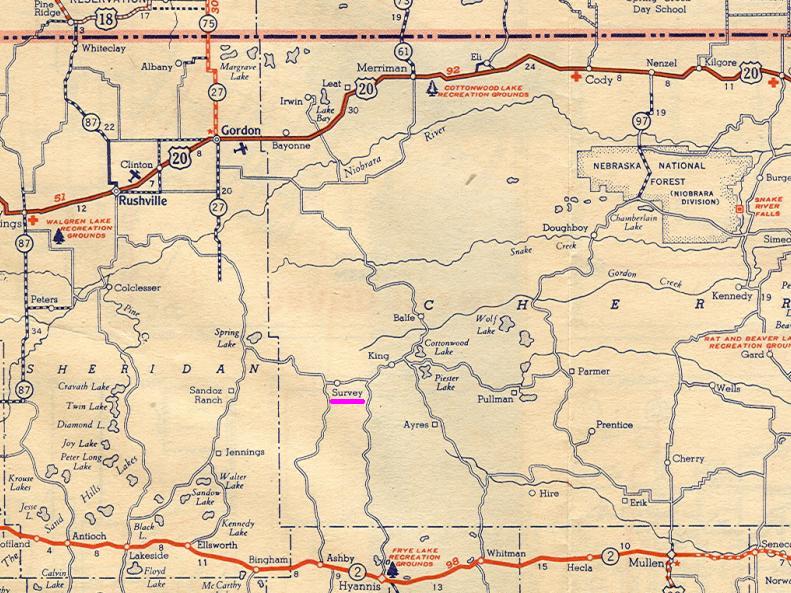 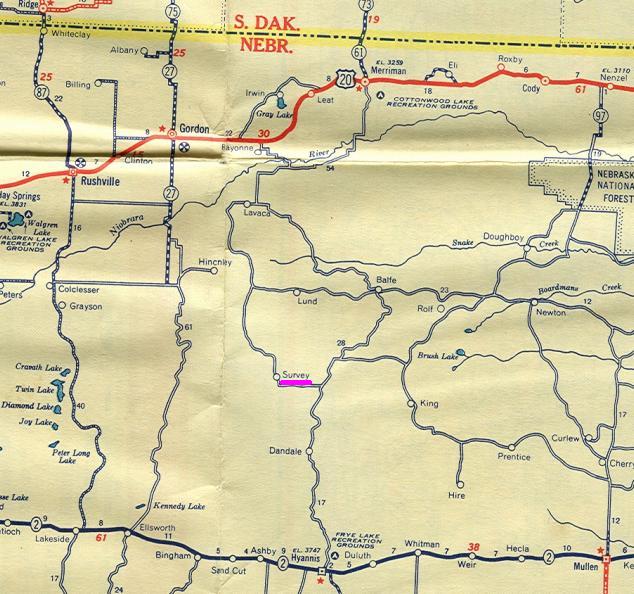 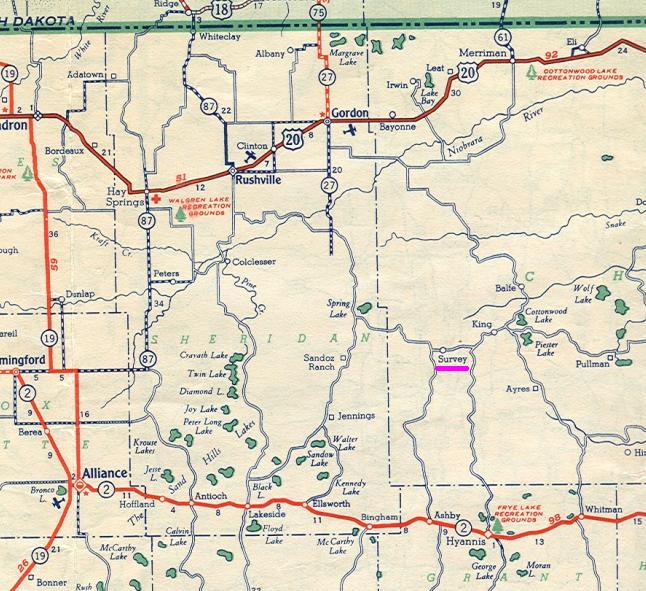 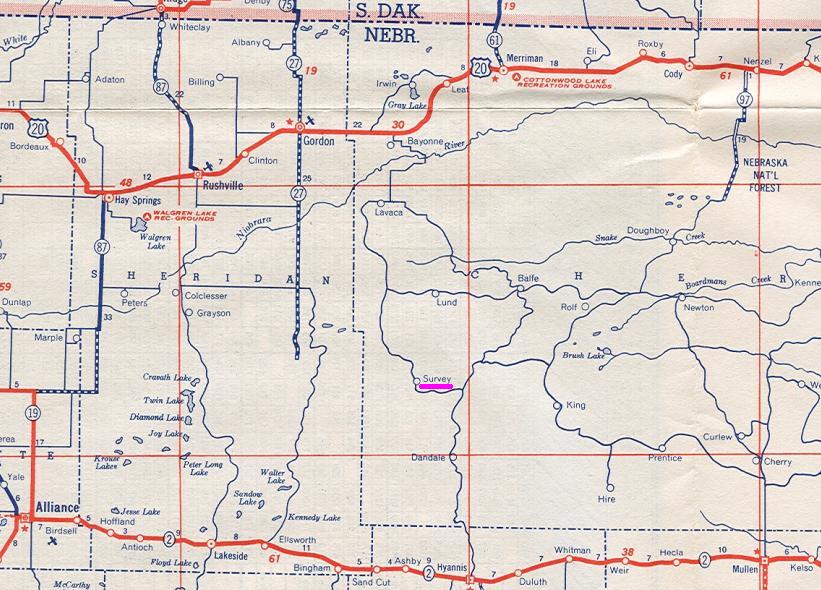