This bench mark is located near the west end of a flume along the Taylor-Ord Irrigation Canal west of Elyria, Nebraska. It appears that the bench mark is a bronze disk placed in a piece of stove pipe filled with concrete. Erosion in the area has exposed most of the bench mark and it leans to the north. The bench mark was established by the Bureau of Reclamation and is marked "NL-39-3". 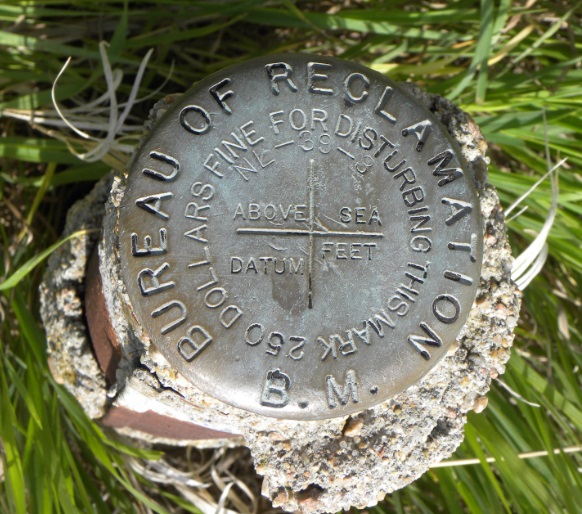 The Taylor-Ord Canal was probably built in the 1930's. It originates at a small dam on the North Loup River approximately 4.5 miles northwest of Taylor and then flows east and south. It passes just south of Taylor, Burwell, Elyria, and then into a creek northwest of Ord.

The canal is approximately 34 miles long. At a point 19.5 miles from its beginning, a newer canal originating from Calamus Lake northwest of Burwell was made to join and follow the original Taylor-Ord Canal for 5 miles in the 1980's. The two canals then split apart and the original canal continues toward Ord where it empties into Dane Creek. The newer canal goes south and then east to Davis Creek Reservoir south of Scotia.

The flume in the photos below is located 1 mile northwest of Elyria along Highway 11 and then 0.4 mile west on Flume Road. The flume is visible from Highway 11. Flume Road is a gravel road that passes under the canal and then continues in a westerly direction. This flume is approximately 750' in length. The original Taylor-Ord Canal had at least 9 of these above ground flumes on trestles. In other places, the canal goes underground for short distances. The longest flume is approximately 1600' and crosses the Turtle Creek area south of Elyria.

Below is an article about the flume near Elyria breaking in 1938.
FLUME BREAK 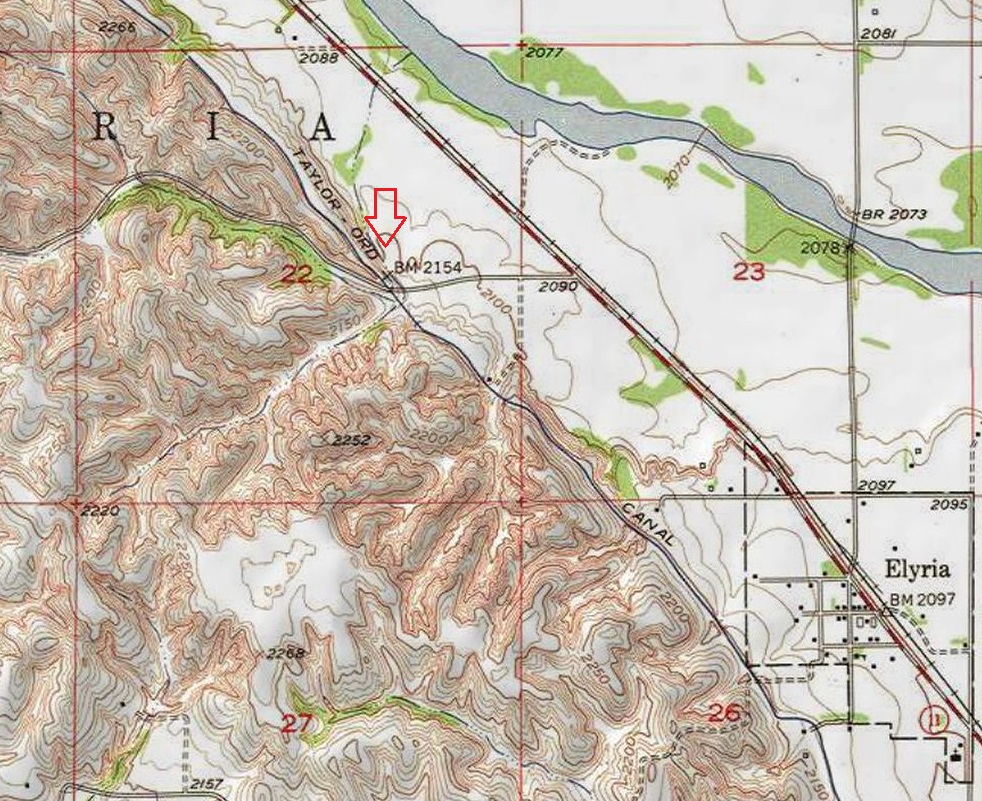 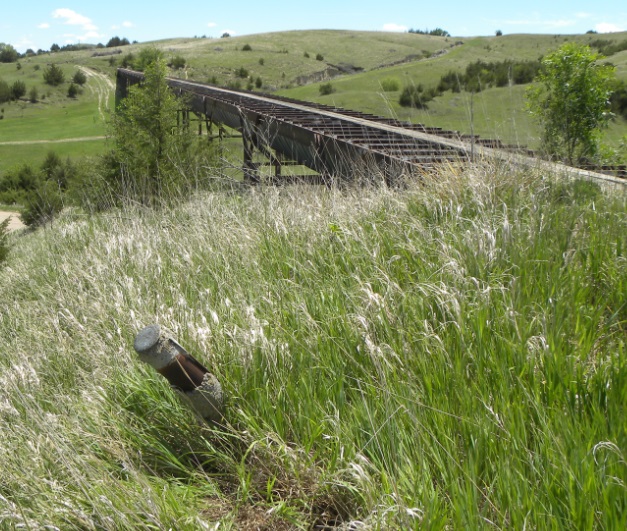 Bench mark at the west end of the flume. Looking east. 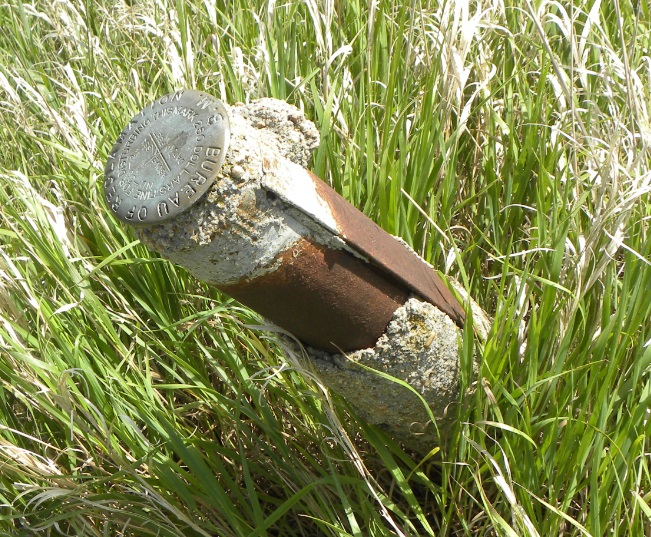 Bench mark showing erosion around the pipe filled with concrete. 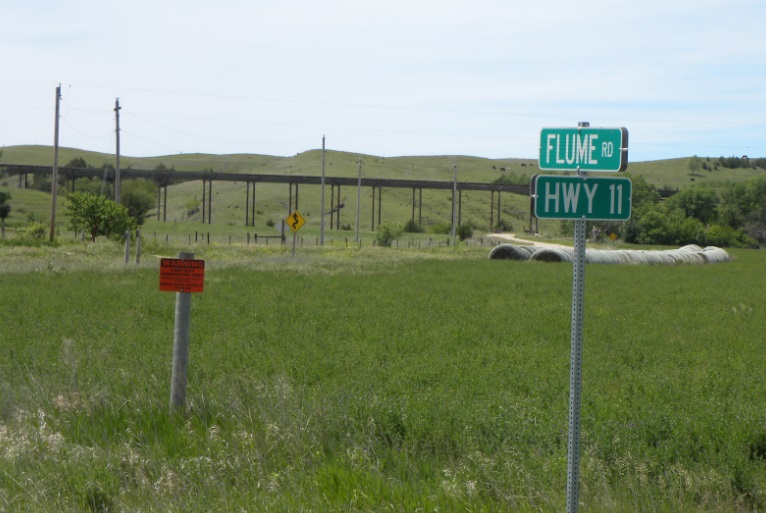 View from the intersection of Highway 11 and Flume Road. 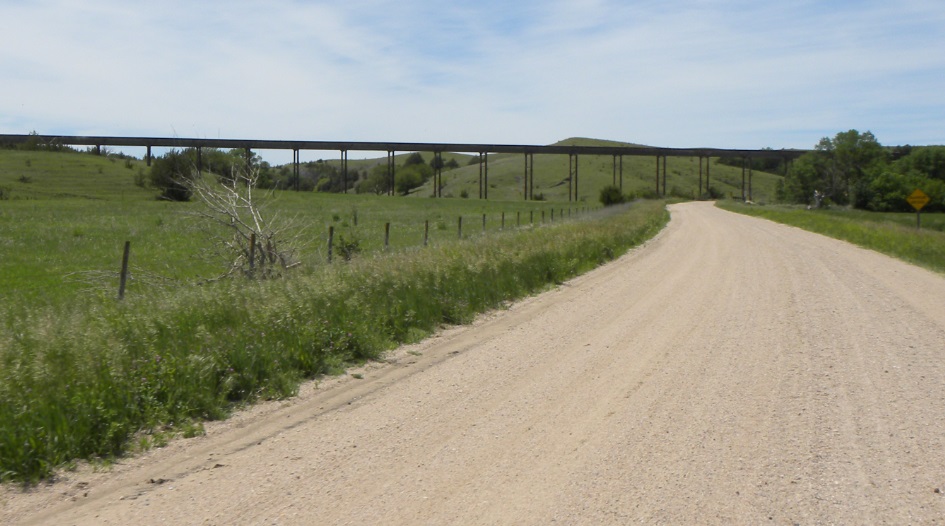 Gravel road leading to the flume. 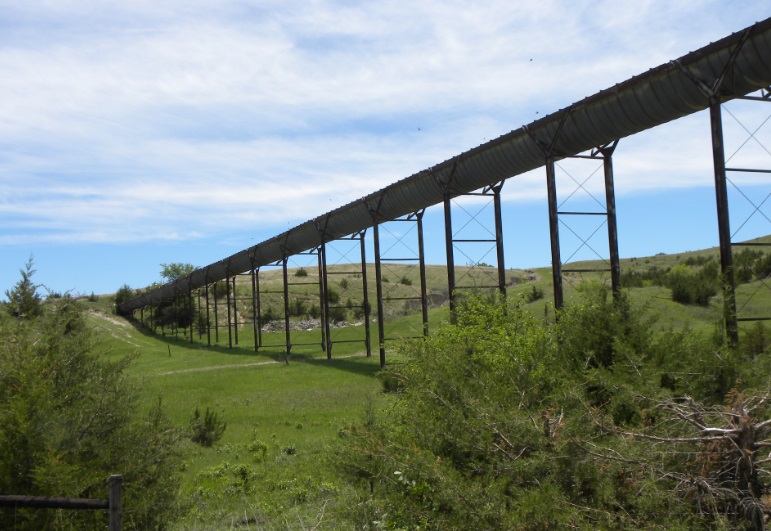 North side of the flume. 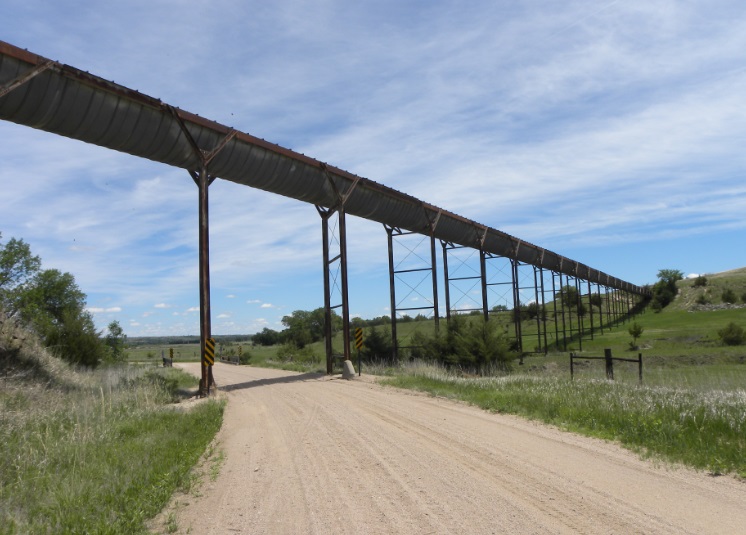 South side of the flume. 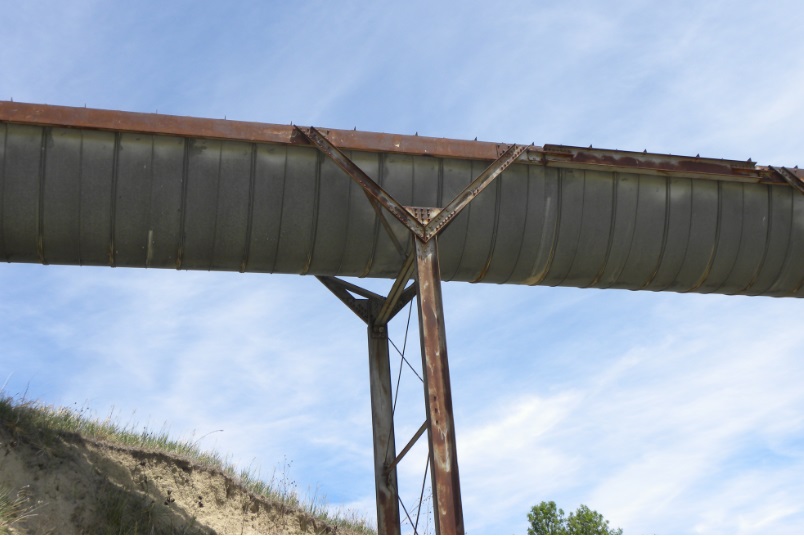 Bottom of the flume from the south side. 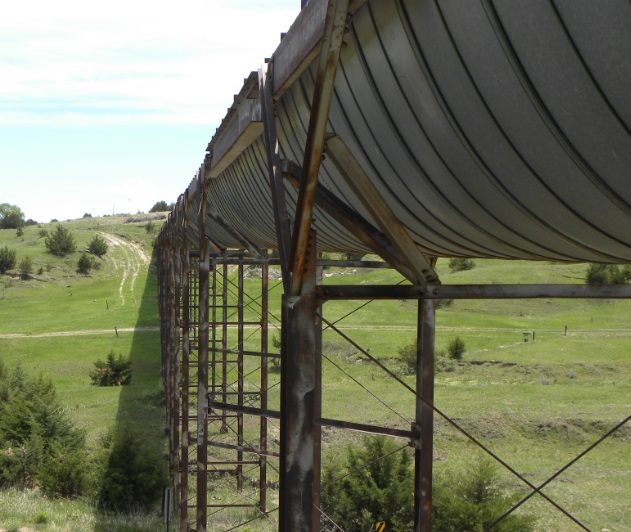 North side of the flume. Looking east. 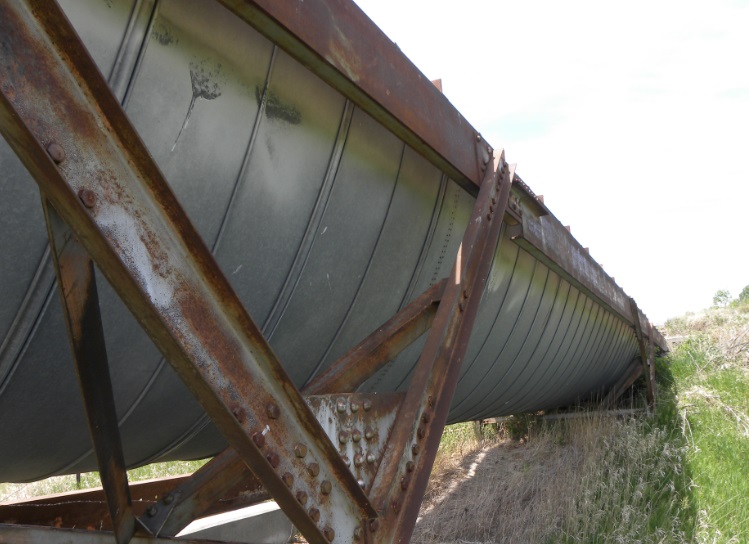 North side of the flume. Looking west. 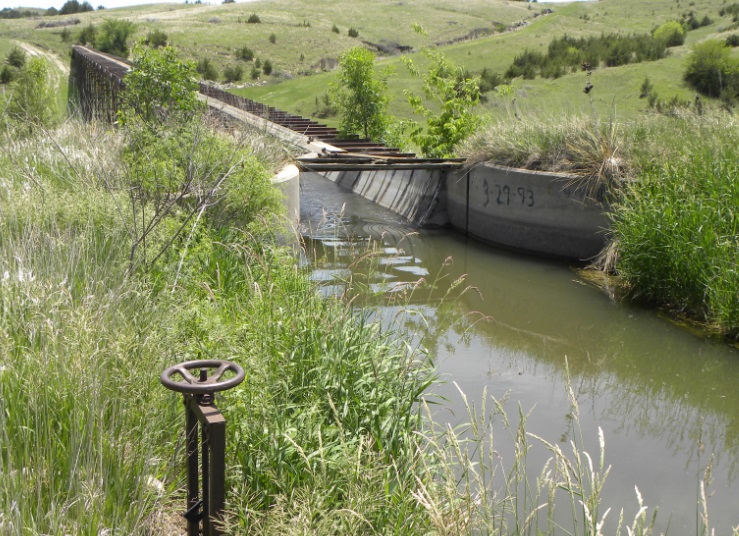 Canal entrance into the flume. 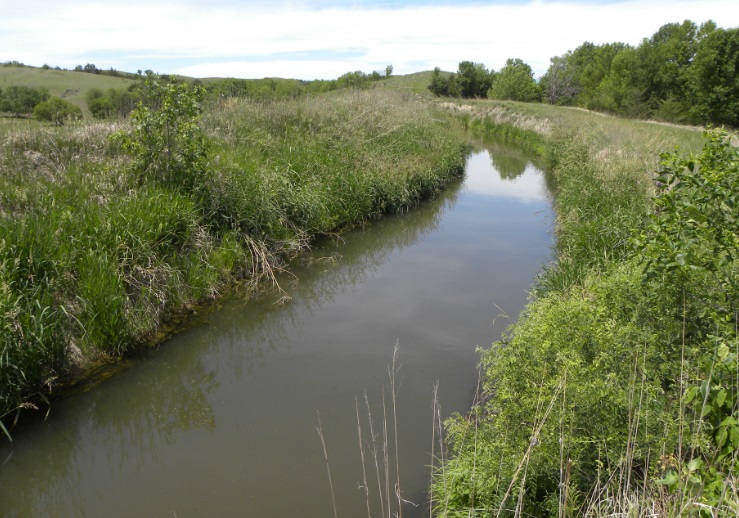 Canal coming from the west to approach the flume. 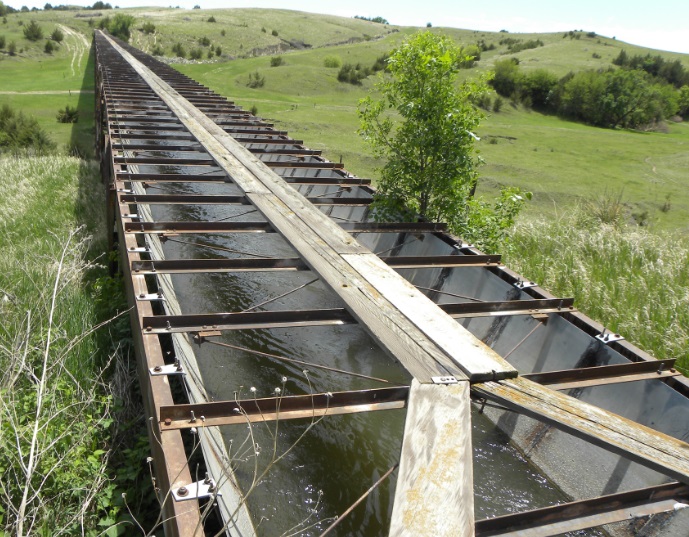 Top of the flume showing the water flowing through it. 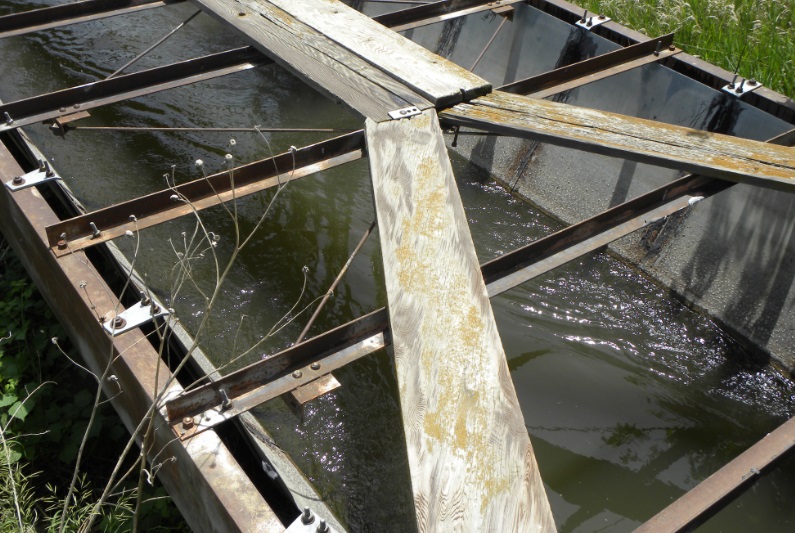 The wooden walkway going across the flume. 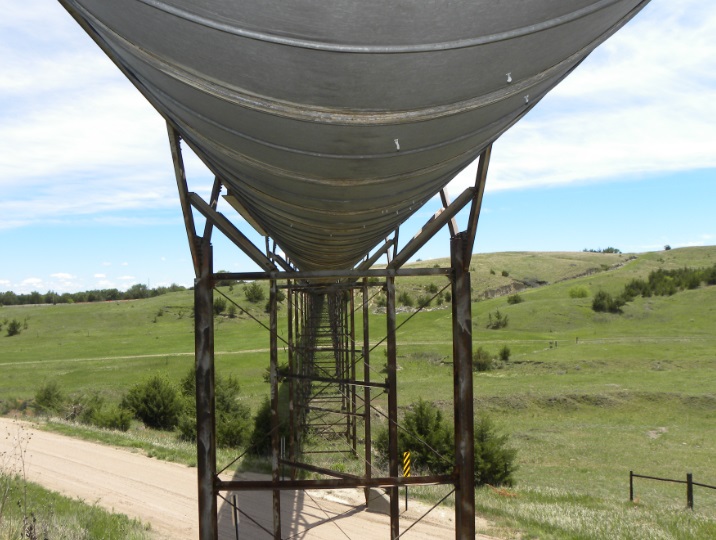 Underside of the flume while looking east. 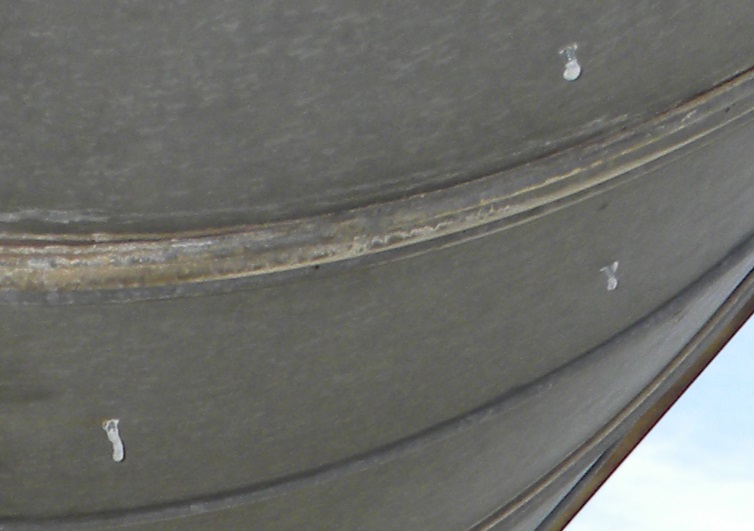 Small bolts coming from the inside of the flume which are presumed to be hole patches. Bullet holes? 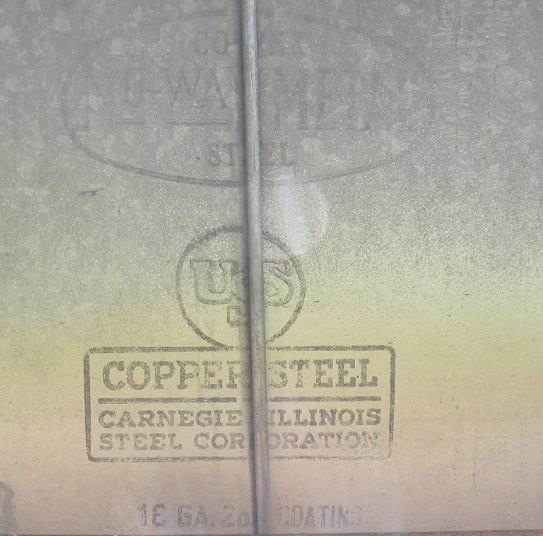 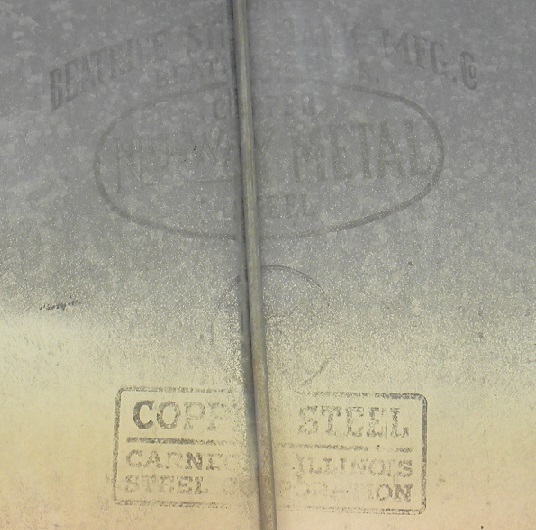 Stenciling on the sides of the flume showing they were manufactured at the Beatrice Steel Tank Company in Beatrice, Nebraska.

Letterhead from the Beatrice Steel Tank Manufacturing Company as it appeared in 1933.

Topography map showing the location of the Taylor-Ord Canal as indicated by the red line. 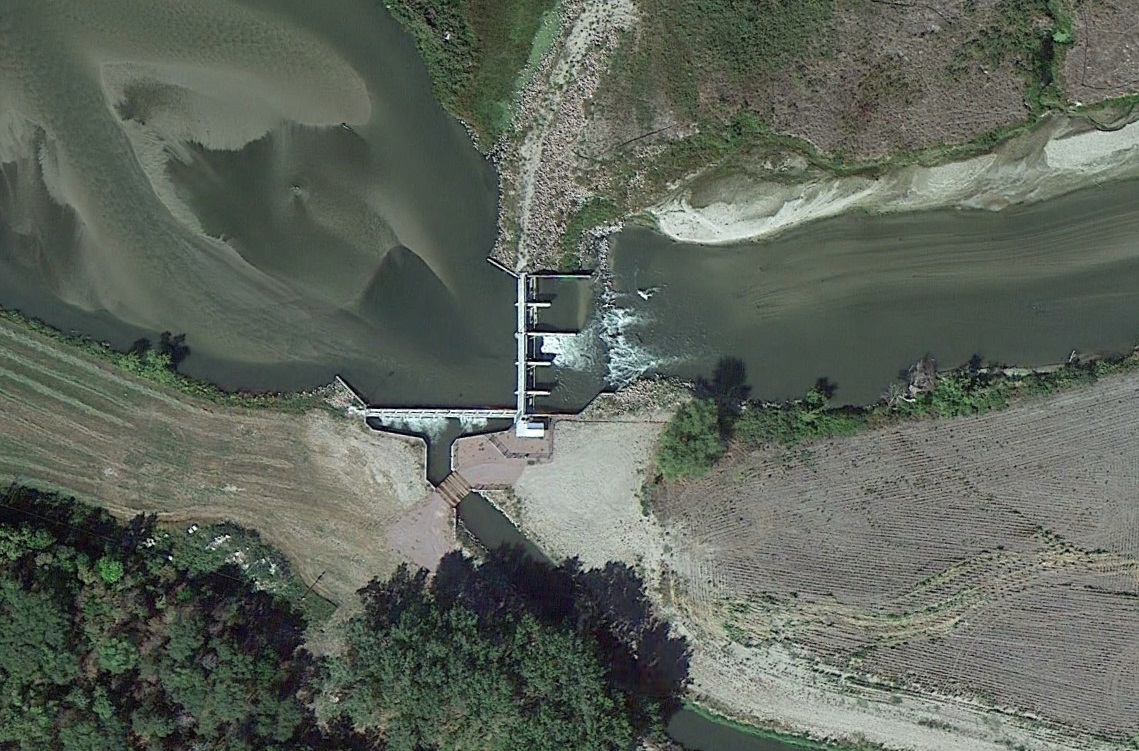 The location of the dam on the North Loup River northwest of Taylor where the Taylor-Ord Canal began.