Sometimes there is a good reason that the datasheet for a particular triangulation station has not been updated in almost 40 years. Station "Murdock" was placed in 1961 and only one recovery note has been made which occurred in 1968. The reason is its location - atop a 150' tall grain elevator. After securing permission, I began my endeavor to locate this marker. 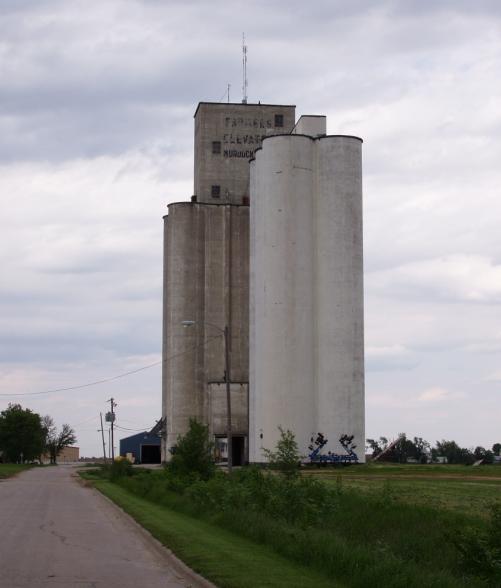 Murdock is a small farming community in southeast Nebraska.
The Rock Island Railroad which once loaded grain cars from this elevator has been gone for over 25 years. 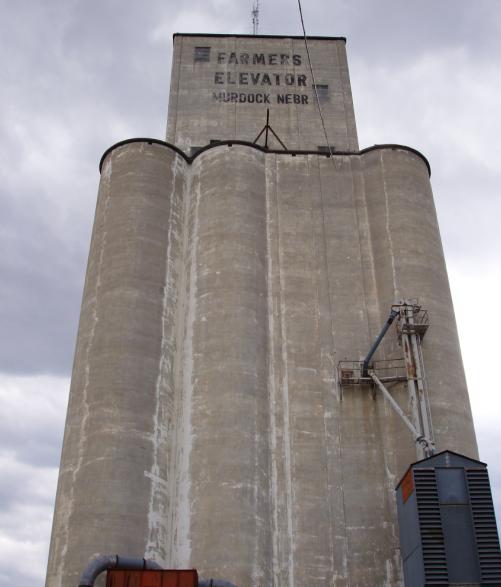 Just how does one reach the top of such a tall structure? 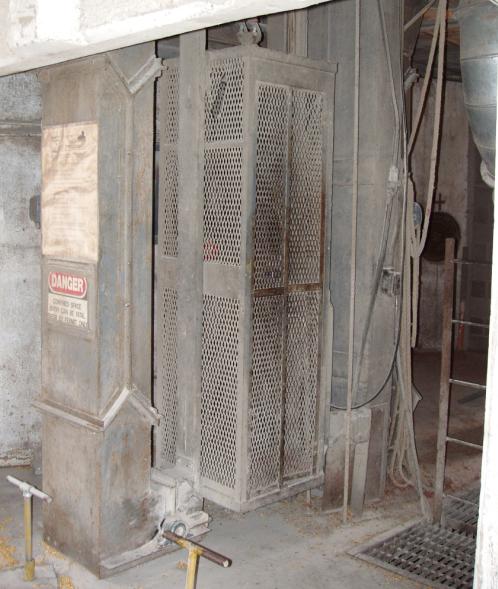 In the center of the structure is a one-person elevator.
If you are a large person I doubt you'll be able to fit since this thing was very small.
The doors press inward, so after already being cramped inside you have to then push the doors closed. 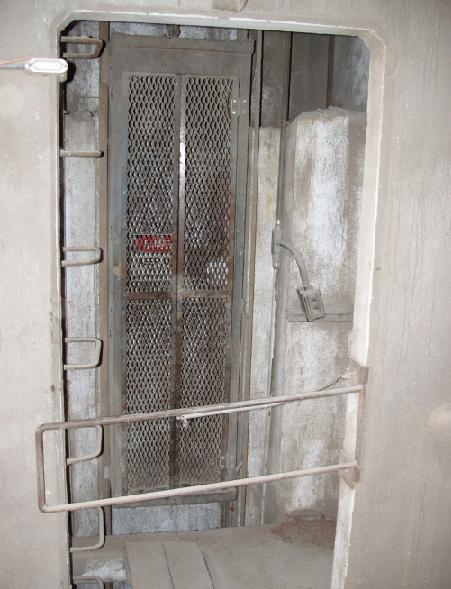 This elevator doesn't "go all the way to the top".
There is a toggle switch inside that allows the rider to be in control of the ride.
The lift is slow and the cables sound like they start binding up once in awhile.
Every so often you go by a light bulb and then into darkness again.
The elevator stops short of the roof. 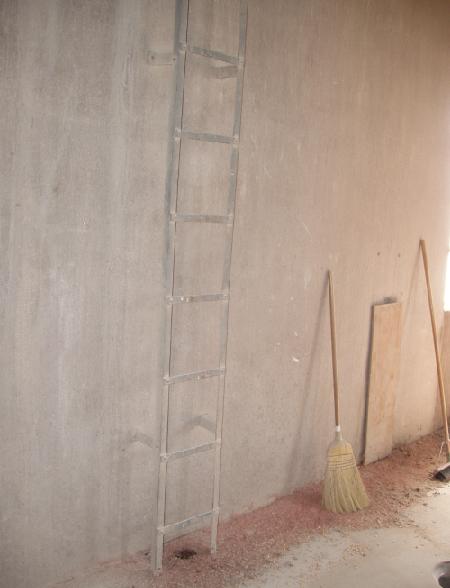 The final climb to the roof is via a narrow ladder attached to the inside wall.
I estimated this to be about 30' to the roof. 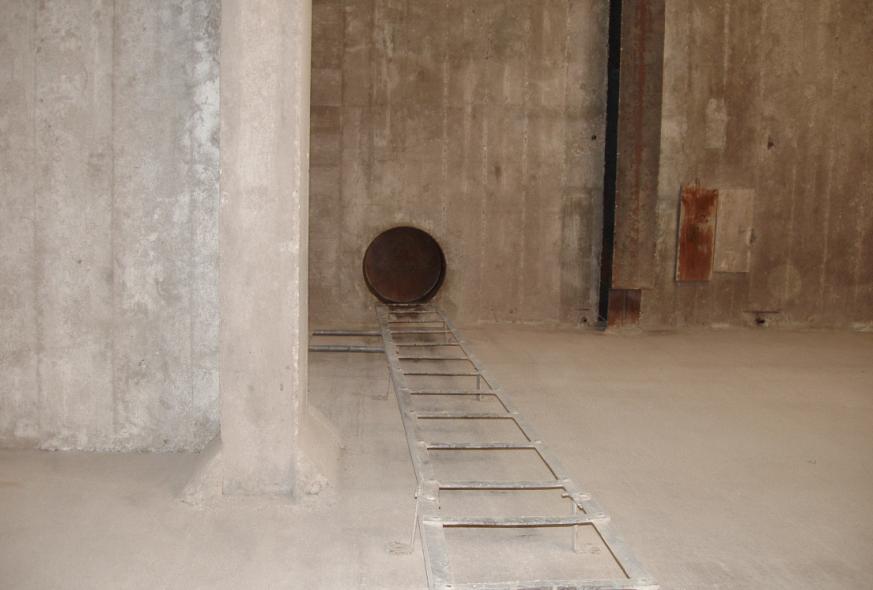 At the top of the ladder there is a small hole that is covered with a heavy iron lid.
This is not hinged, so you have to hold on to the ladder with one hand and push up the lid and move it to the side with the other hand.
If a person had trouble getting into the elevator, I doubt you'd be able to make it through this hole. 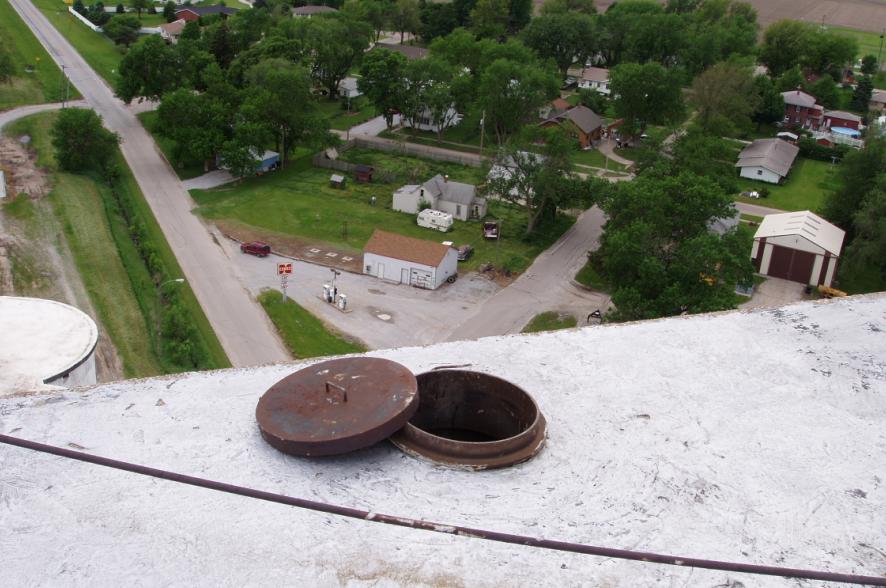 The lid is right next to the edge...and I mean right next to it!
There are no railings, lips, or anything else along the top edge.
The fun part is extracting yourself through the hole away from the wall in which the ladder is attached. 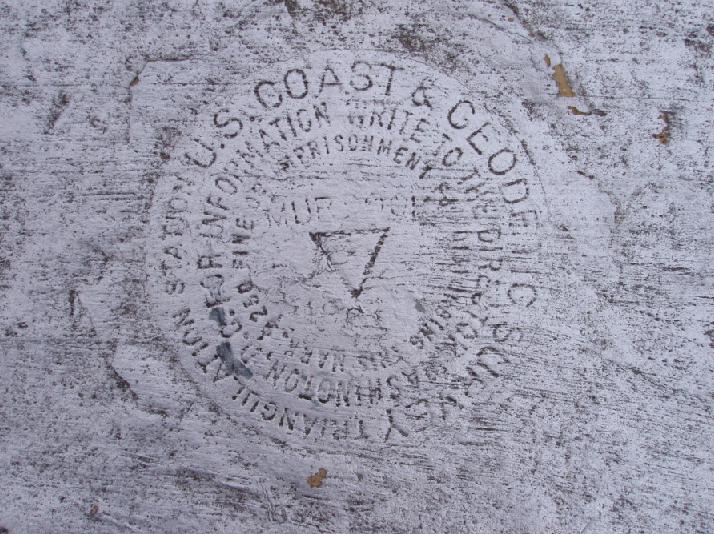 I easily found the triangulation marker near the center, but it was covered with many layers of silver roof paint. 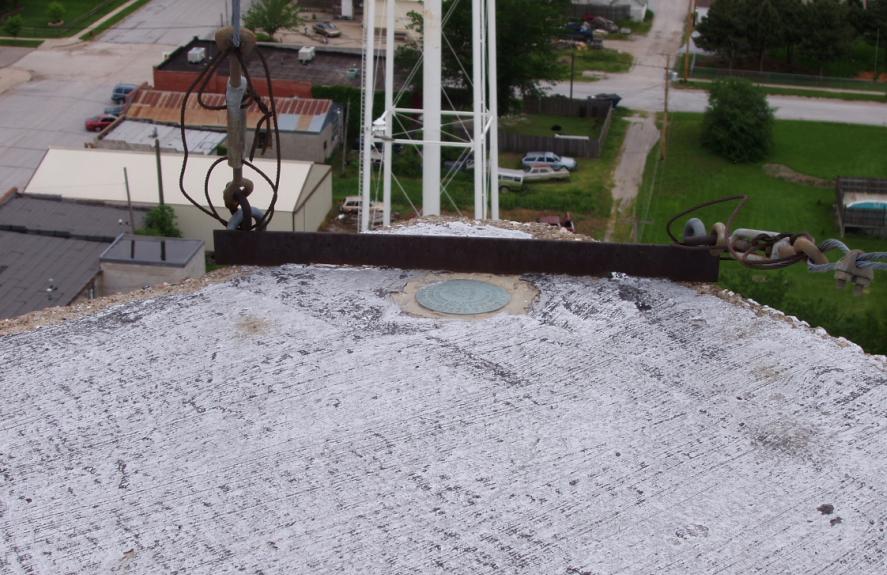 Reference mark No. 1 was found at the northeast corner of the roof. 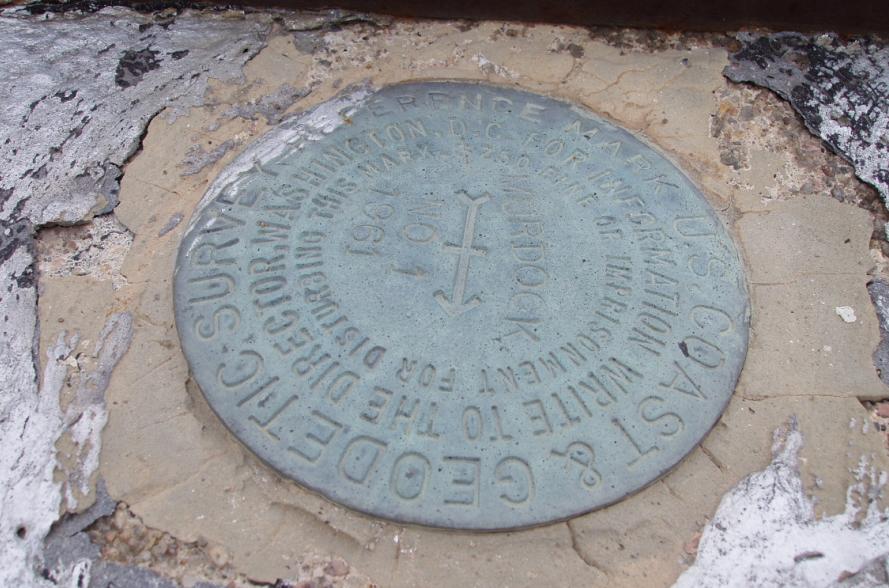 Somehow this mark escaped being painted.

Reference Mark No. 2 was found at the southeast corner of the building.
It appears that the initial location was intended to be closer to the corner by evidence of a hole patched in with concrete. 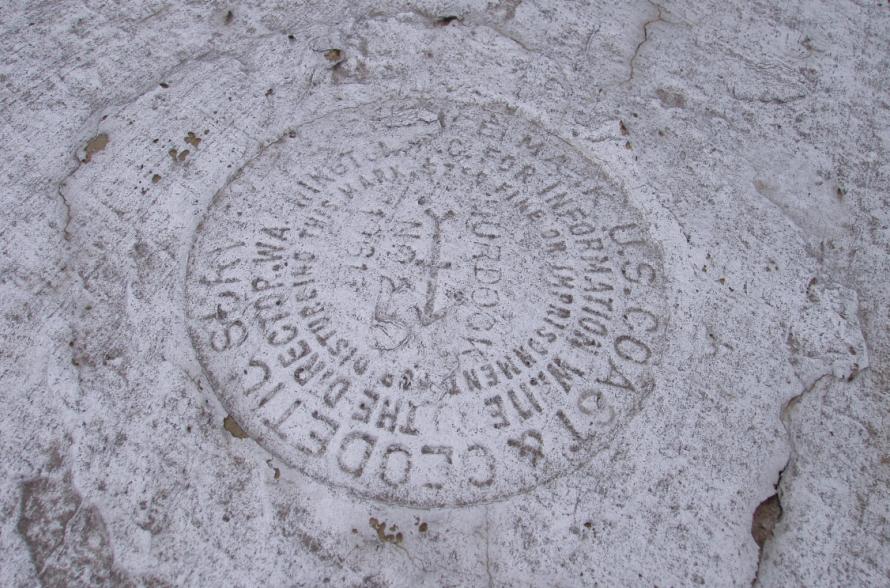 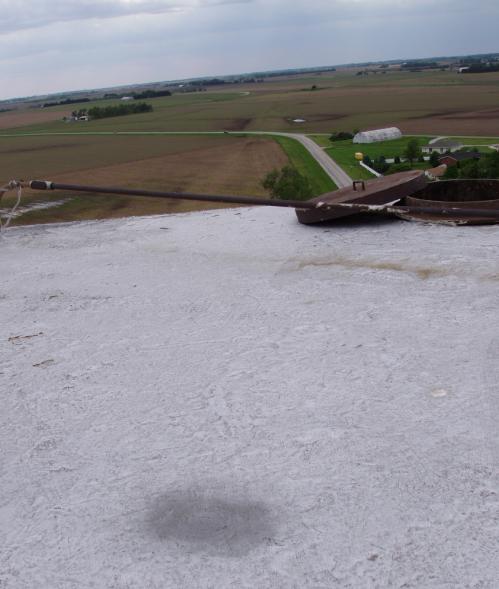 I attempted to wire brush the paint off the triangulation station mark, but the layers of paint would not give.
This photo is looking westerly. 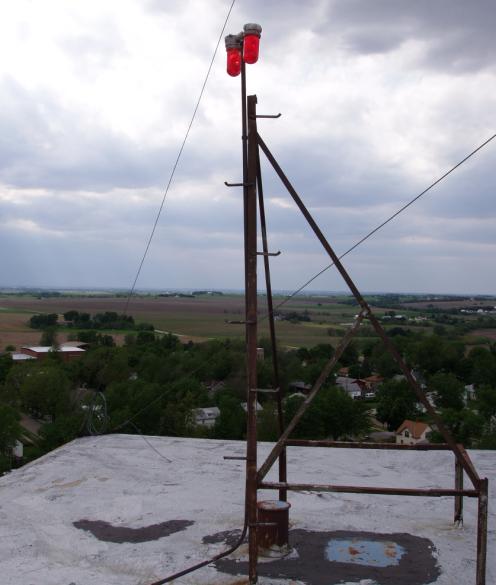 This is the aircraft warning light that sits on the top of the tower.
It is also listed in the NGS database. 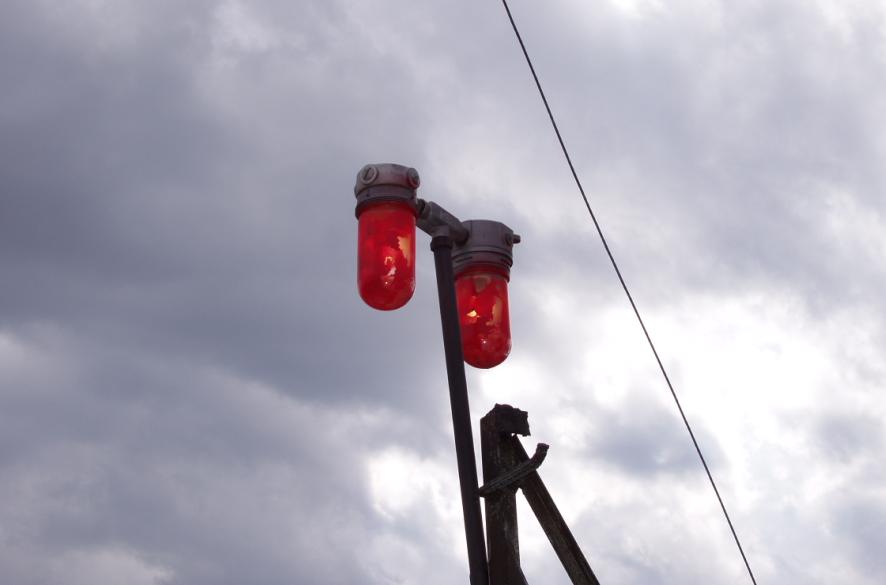 The lights were on, so they are probably on 24 hours a day.
The red appears to be paint on the inside of the clear jars. 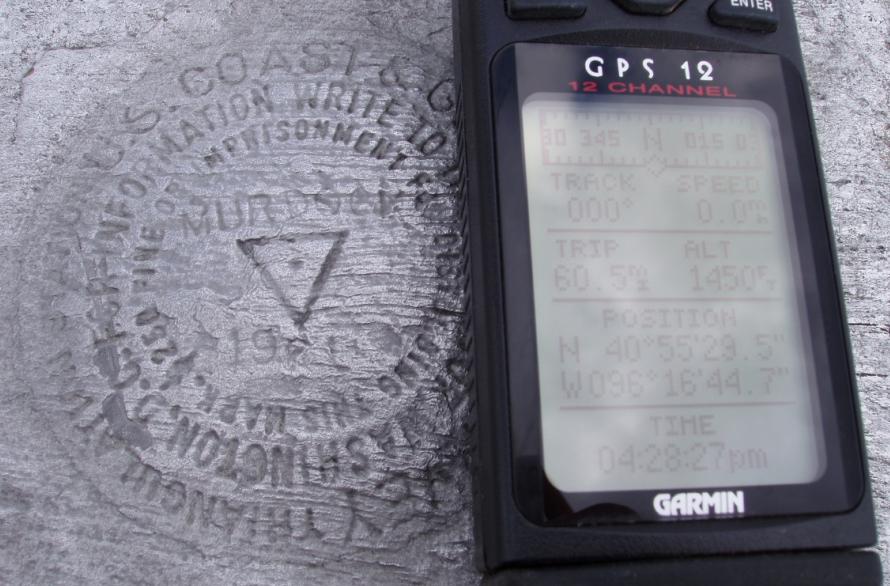 Photo of a handheld GPS next to the triangulation station. 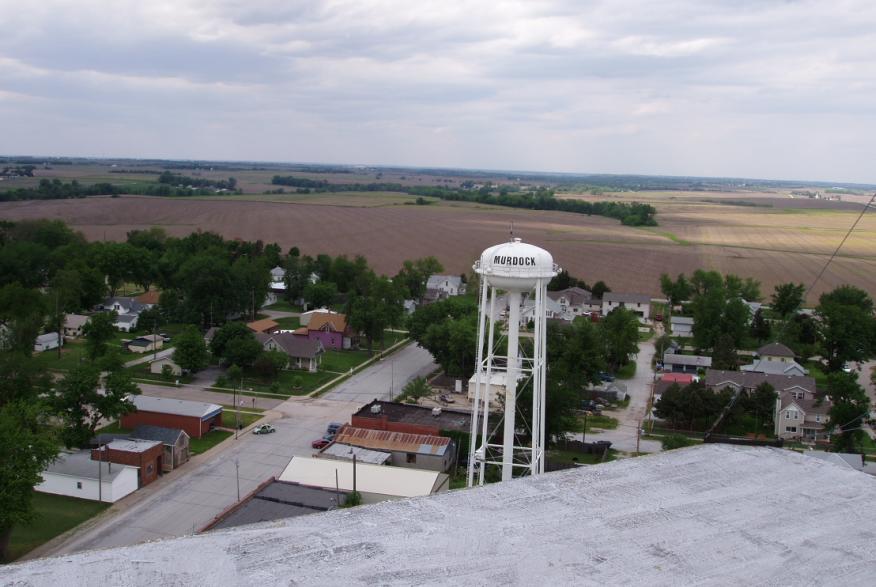 Even the town water tower seems small when up this high. 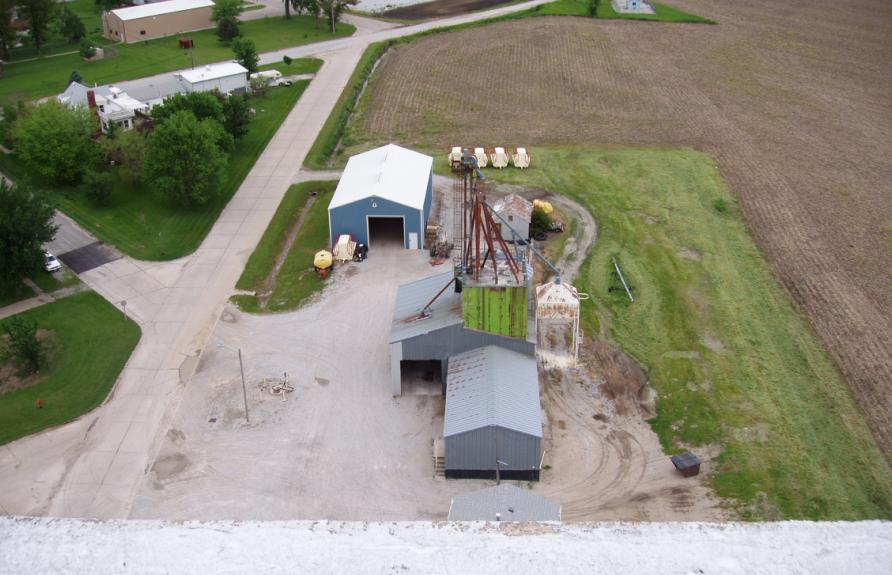 I am thinking a parachute or hang glider would make an easy descent to the ground, but decided to go back the way I came.
Going down through the hole was actually harder than coming up through it.