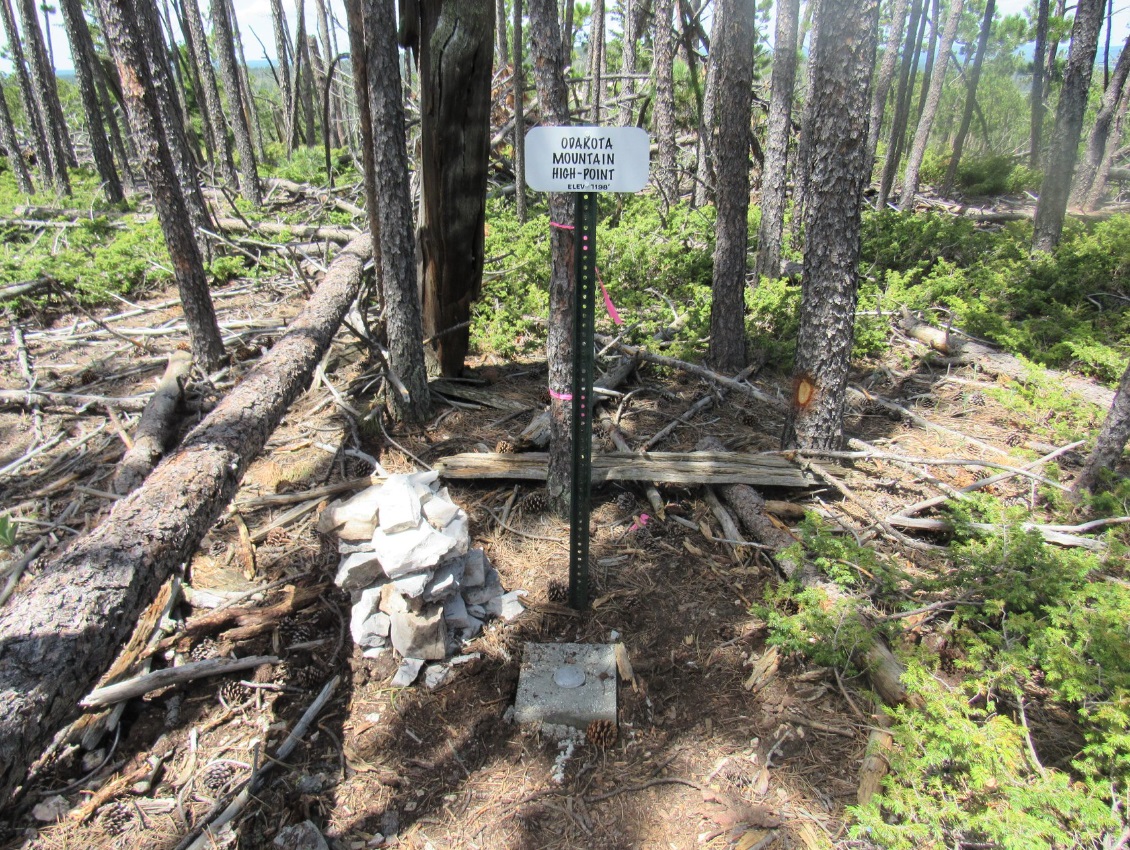 This site details the only known precise survey that has been made to determine the true elevation of South Dakota's second highest peak, "ODAKOTA MOUNTAIN", with any degree of certainty.

Although it is the State of South Dakota's second highest location, many have never heard of Odakota Mountain in the Black Hills. This location had mostly been overlooked by early explorers and mapmakers because it is not a prominent peak like many of the other highest locations in the Black Hills. It is located about 9 (straight line) miles due west of Hill City, but will require about 18 miles of road travel to get there.

The elevation of a bench mark now placed on Odakota Mountain was determined on May 15, 2019, to be 7197.70 feet on the North American Datum of 1988 (NAVD88). Previously published elevations have stated the highest elevation on this mountain to be from 7202 to 7212 feet. There is no known data that supports the previously published elevations or what methods were used to arrive at these higher numbers. Similarly to what was found during a precise survey at Black Elk (Harney) Peak in 2016, the elevations seem to have been perpetuated without any real surveying methods to back them up. The results of the Black Elk Peak precise survey can be found here: BLACK ELK PEAK. 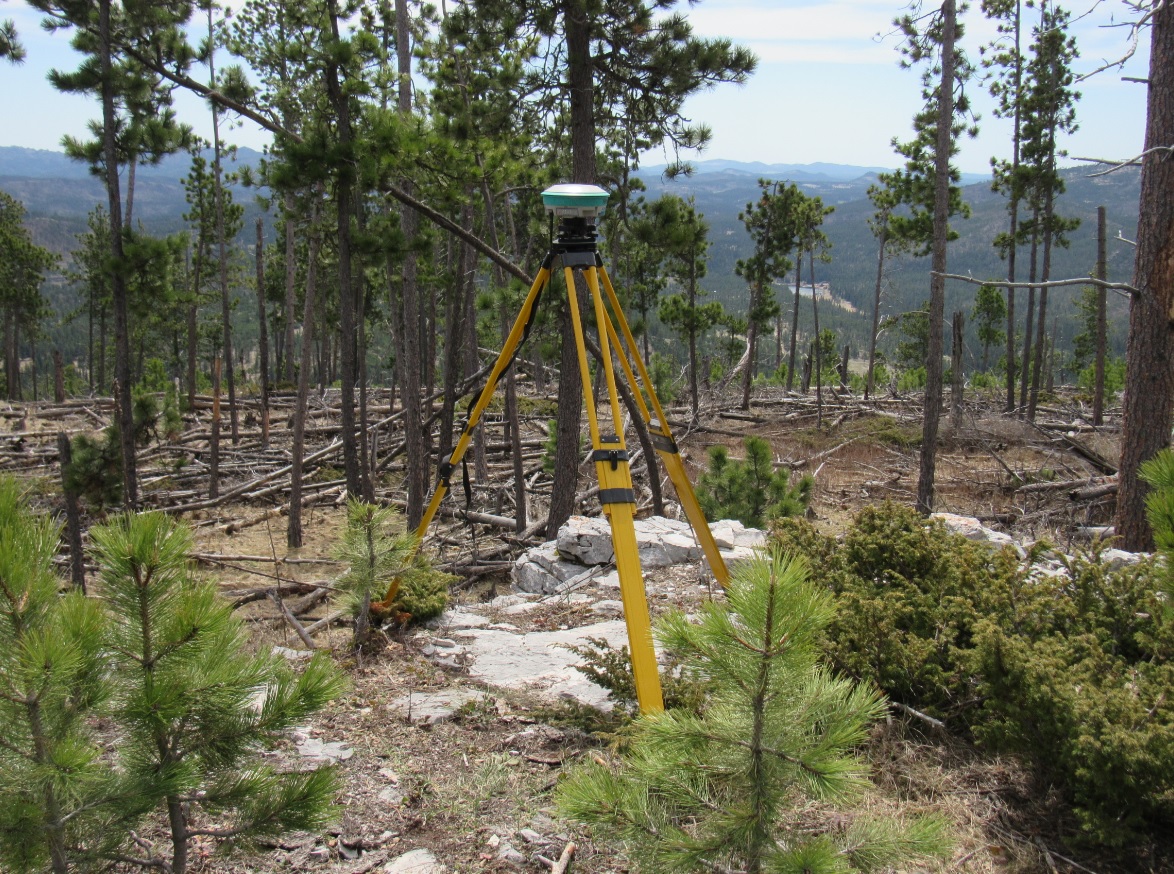 Location where the GPS receiver was placed to obtain the best satellite coverage. - Jerry Penry image.

The survey to determine the true elevation of Odakota Mountain was done by Jerry Penry of Lincoln, Nebraska, and Paul Horsted of Custer, South Dakota. Jerry has over 35 years of land surveying experience and is a licensed land surveyor in both states of Nebraska and South Dakota. Paul is a well-known Black Hills historian and author of several books. To begin the survey, they initially used a surveyor's level and rod that was graduated in tenths and hundredths of a foot. Jerry randomly set up the level and had Paul move around to various locations on the mountain to find the lowest reading on the rod which indicated the highest point. A limestone ledge along the eastern edge of the mountain was found to be lower than the highest elevation located further west in the trees. Since trees tend to uplift the soil around them, the bases of trees were avoided as being the high points. After about one hour of taking readings, a location within the trees was decided to be a suitable place to place the bench mark. Odakota Mountain is somewhat flat where the highest point is located, so there conceivably could be a few other nearby locations with the same elevation in the immediate area.

The second highest peak in South Dakota was unnamed for much of its history and it was not until the late 1960's that the name was officially associated with the area. The Odakota name did not appear on a U. S. Geological Survey quad sheet map until 1977 and did not appear on the Black Hills National Forest map until the 1988 edition. The naming of the mountain is compiled in a story by Seth Tupper here: ODAKOTA HISTORY STORY

To monument the selected location, a 3/4"-diameter iron pipe, 30" in length, was driven down into the hard soil and rock. A stamped 3 1/4"-diameter aluminum disk was cemented into the top of the pipe and a 10" square concrete pad was placed around the pipe and disk. The location was later marked on June 7, 2019, with a small sign indicating it to be the Odakota Mountain High-Point. Because the bench mark is located in the trees where accurate satellite GNSS (GPS) signals could not be obtained, a random point was selected on the limestone outcropping where a survey grade GPS receiver was placed on a small marked point. Prior to placing the receiver, the level and rod was used to determine the difference in elevation between the permanent bench mark in the trees and the point on the rock where the GNSS receiver was placed. This difference was found to be 1.190 feet. This difference was later used to determine the elevation of the aluminum disk by adding it to the elevation determined at the GNSS receiver location. 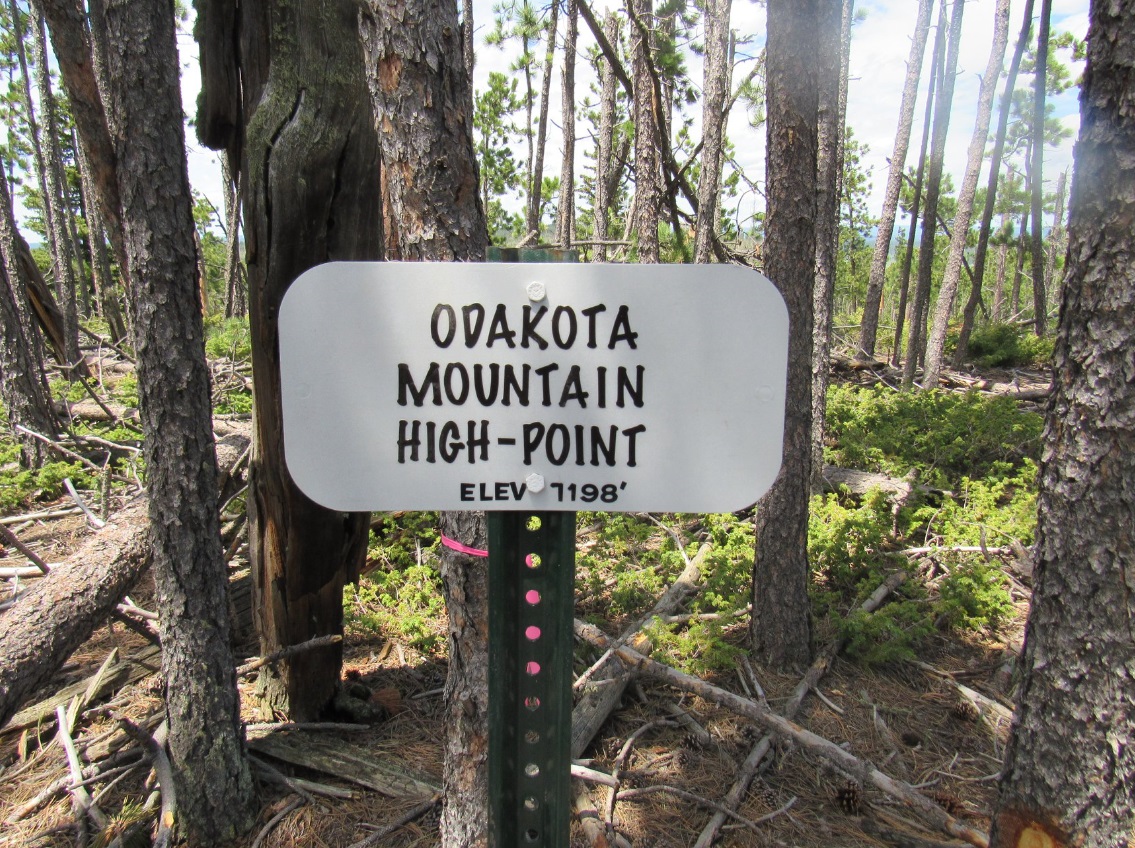 The GNSS receiver used was a Sokkia GSR2700ISX model known for high-precision accuracy during the collection and post-processing of the static data. Jerry has used this type of receiver for over a decade and is well familiar with its capability and reliability when doing static GNSS surveying. This receiver was allowed to operate continuously upon the point on the outcropping for 4 hours and 11 minutes. The antenna height was measured multiple times in both inches and millimeters to ensure accuracy. Post-processing of the GNSS file was done through the National Geodetic Survey using their Online Position User Service (OPUS). The ortho height on the point placed on the outcropping was determined to be 2193.501 meters (7196.511 feet) NAVD88. By adding the 1.190 feet to the elevation on the rock outcropping point, the bench mark in the trees is therefore 7197.701 feet (rounded up to 7198 feet). 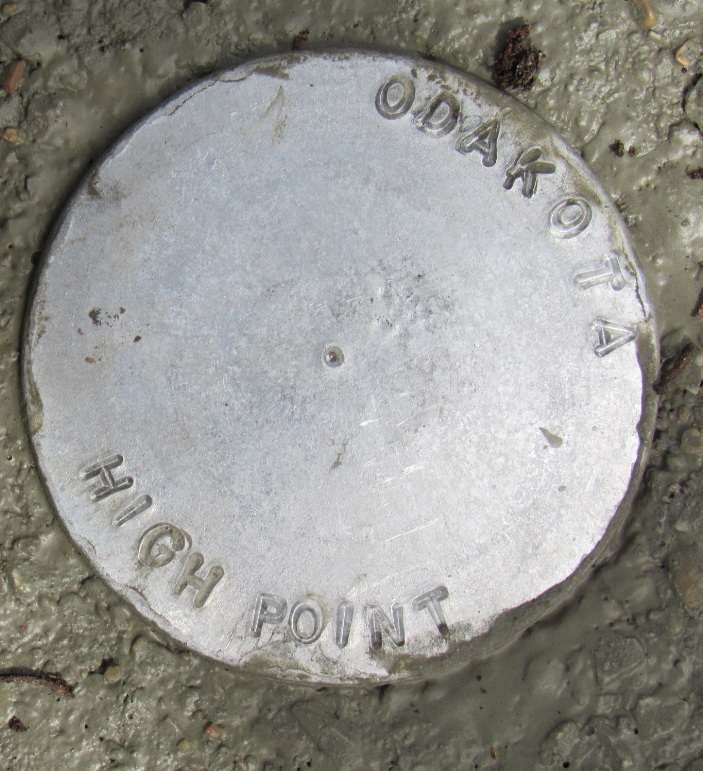 Aluminum disk that was placed in concrete at the high point on Odakota Mountain.. - Jerry Penry image.

Directions to Odakota Mountain: From Hill City, go south on Highway 16 for 1.55 miles to Reno Gulch Road. Then go west on Reno Gulch Road for 9.65 miles to the junction of Medicine Mountain Road (also known as National Forest Primary Road 297). Go north and west on Medicine Mountain Road for 3.71 miles to the junction of 6 Mile Road (also known as Sixmile Draw). Go west on 6 Mile Road to a forest trail on the south side known as Long Draw (also known as Forest Trail 693). Take the trail for about 0.50 miles south to a place to park. From this location, you can make an easy hike of about 450 yards going east to the high point located in the trees about 70 feet west of the rock ledge. GPS location: 43-55-24.7N 103-45-16.0W. 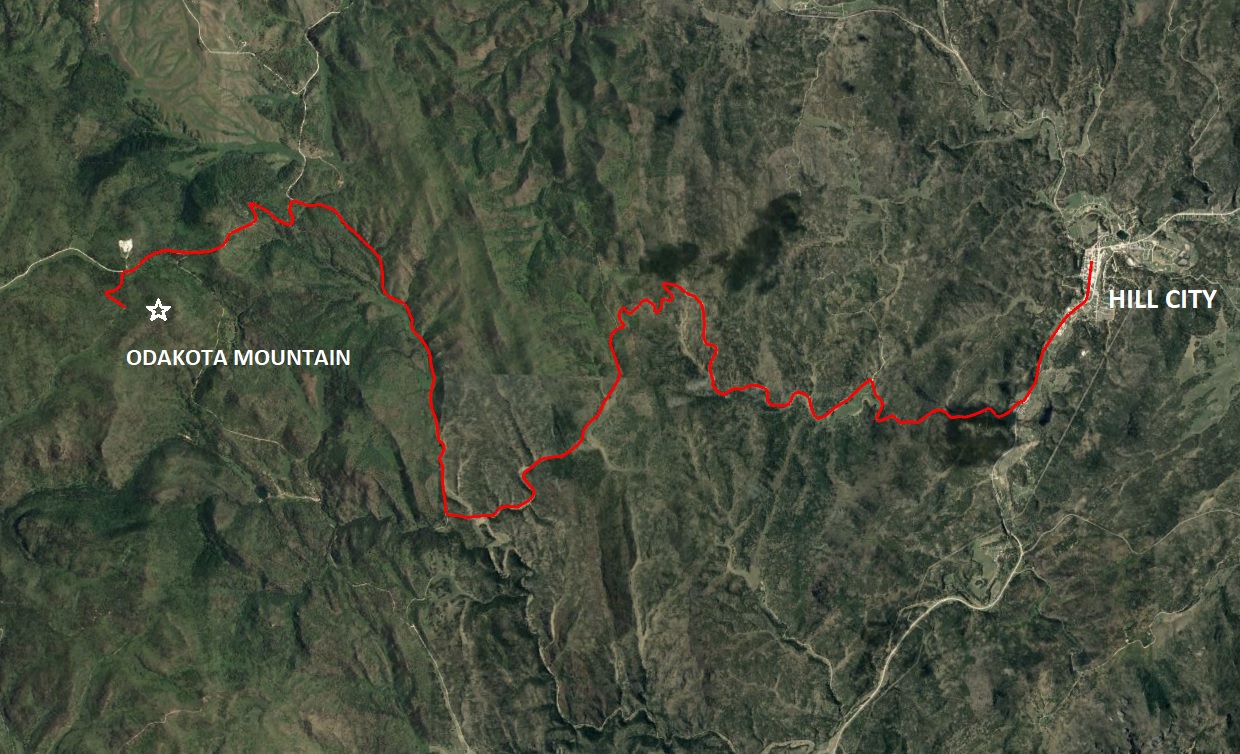 Please contact before using text or images from these webpages.