In July of 1911, the superintendent of the U. S. Coast & Geodetic Survey submitted to County Clerk D. H. Saylor in Aurora, Nebraska, the report detailing the establishment of the magnetic station by H. E. McComb on June 19, 1911. The observations were made in the northwest corner of the courthouse grounds which was marked with a Bedford limestone post 7" square and projecting 3" above the ground. In the center of the post was placed a brass station marker. This marker is what is now known by most surveyors as a brass disk. These brass magnetic station markers are the earliest metallic disks placed in Nebraska by USC&GS. The brass triangulation station and brass bench marks placed by this agency would not appear in Nebraska until the year 1930. 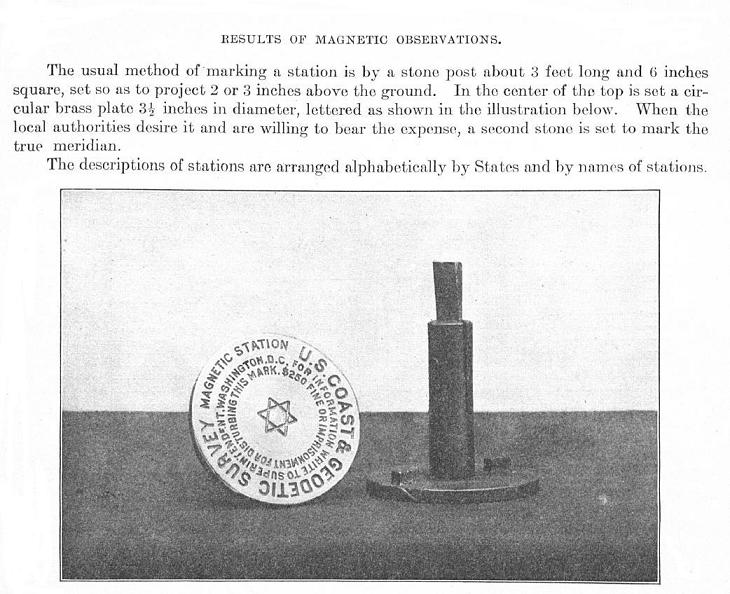 These were the first brass monuments placed by USC&GS in Nebraska.
Originally they were referred to as "brass plates" before the term "disk" became standard terminology.
This type of monument was drilled into the top of the limestone post for the Aurora Magnetic Station - Photo from USC&GS Special Publication No. 15 of 1912.

While researching survey records at the Hamilton County courthouse in Aurora, surveyor Gene Thomsen came across the letter that described the placement of the mark on the first page in Surveyor Record Book No. 1. He discovered that all three reference marks were still in place, so there was a good opportunity to find this marker at a later date. Thomsen designed a paper compass with the plotted reference directions upon it which he affixed to the top of a staff. In theory we would be able to go to the site and move around until the reference lines on the paper compass pointed exactly to all three marks.

Upon arriving at the site on September 12, 2009, we began walking to the general area. A moss covered stub of a stone projecting just slightly above the grass was discovered. We placed the staff and paper compass over the stone and all three reference marks lined up exactly! Unfortunately the top of the magnetic station had been sheared off and the brass disk was missing. After digging around the stone we could clearly see where the stem of the disk had been drilled into the top of the stone. Despite the damaged condition of the mark, and the absence of the disk, it was still enjoyable to find this nearly century old surveying mark still in existence!

On May 28, 2011, the century old monument was first tied out and then removed by Gene Thomsen, Jerry Penry, Duane katt and his son Nick. The broken portion of the top was sawed off and then the monument was reset back into the ground. A drill hole was made and a new brass disk was cemented into the top of the stone. A belt sander was used to bring the top and sides of the monument to a like-new condition. A concrete pad was placed around the monument and a marker plate was set upon a pedestal. The formal dedication of the monument took place on June 25, 2011. 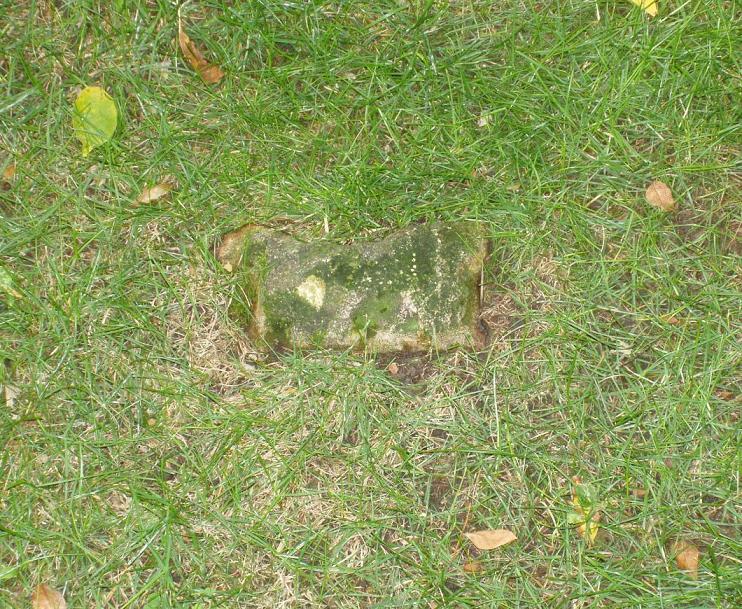 The Aurora magnetic station was first discovered just sticking above the ground and covered in moss.
A scrape was on top (left) that was most likley from a lawnmower. The top of the marker was also broken off and the brass disk was missing. 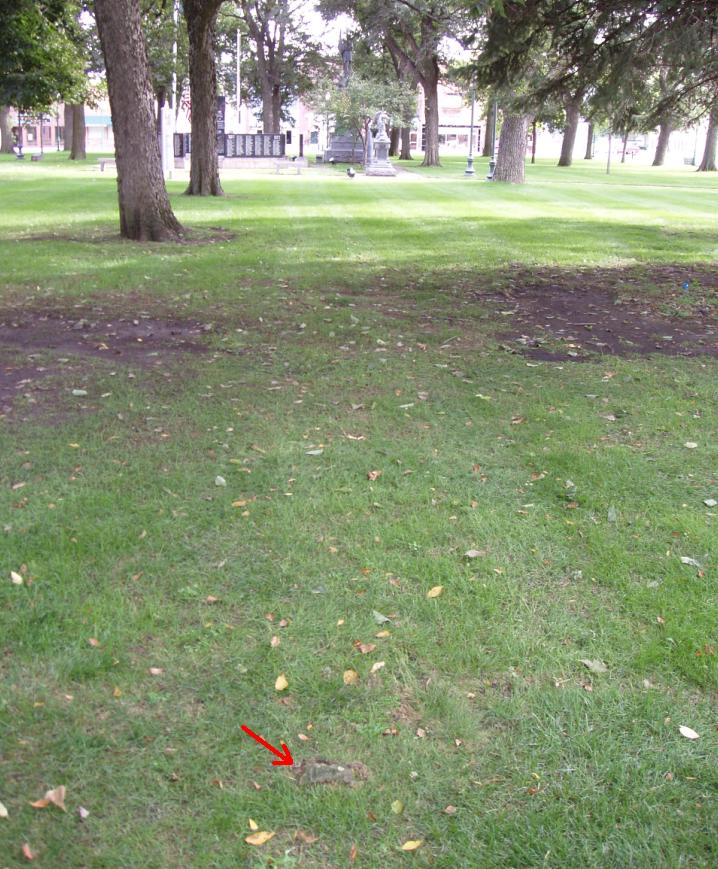 Looking south toward the GAR monument that was used as a reference bearing. 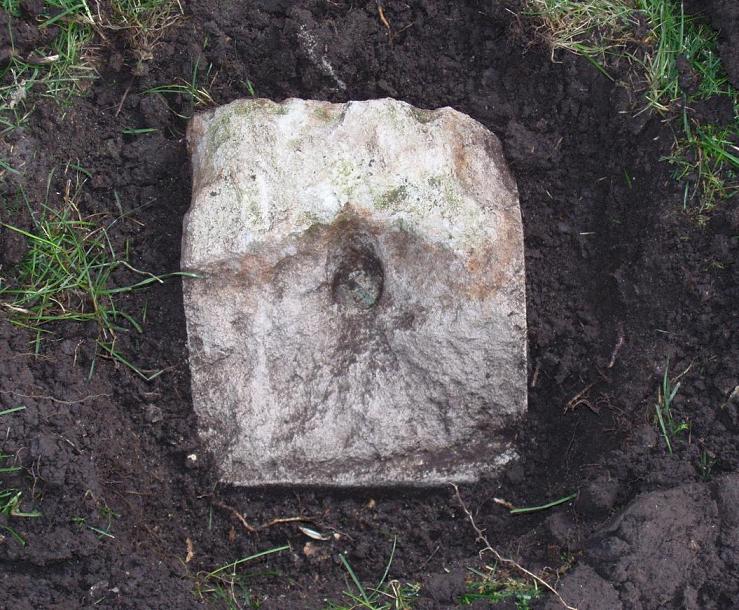 A drill hole was clearly found that indicated where the stem of the brass disk had been placed. 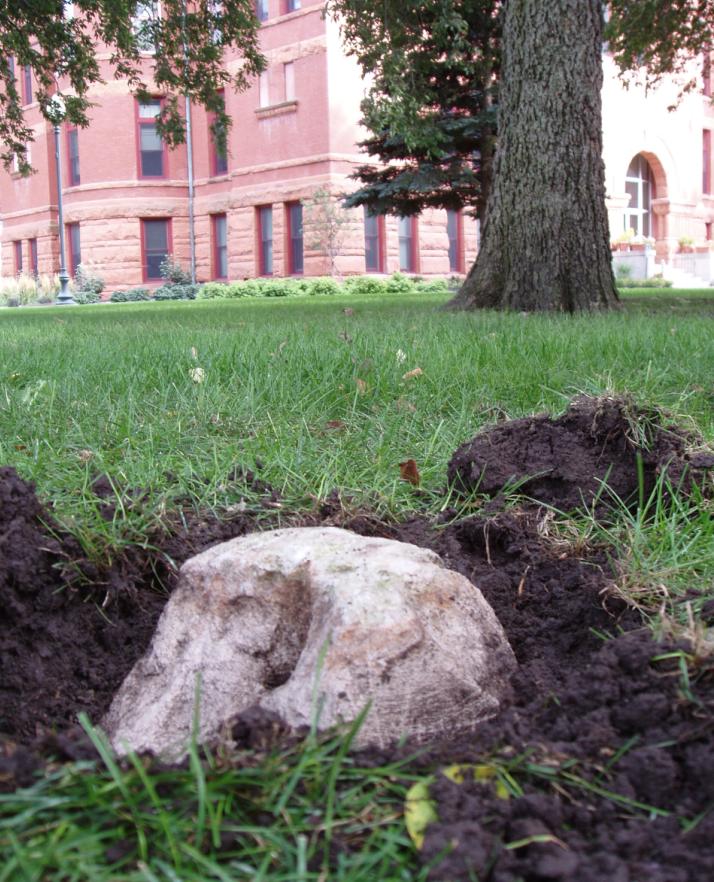 Ground level view of the magnetic station looking southeast toward the northwest corner of the courthouse building. 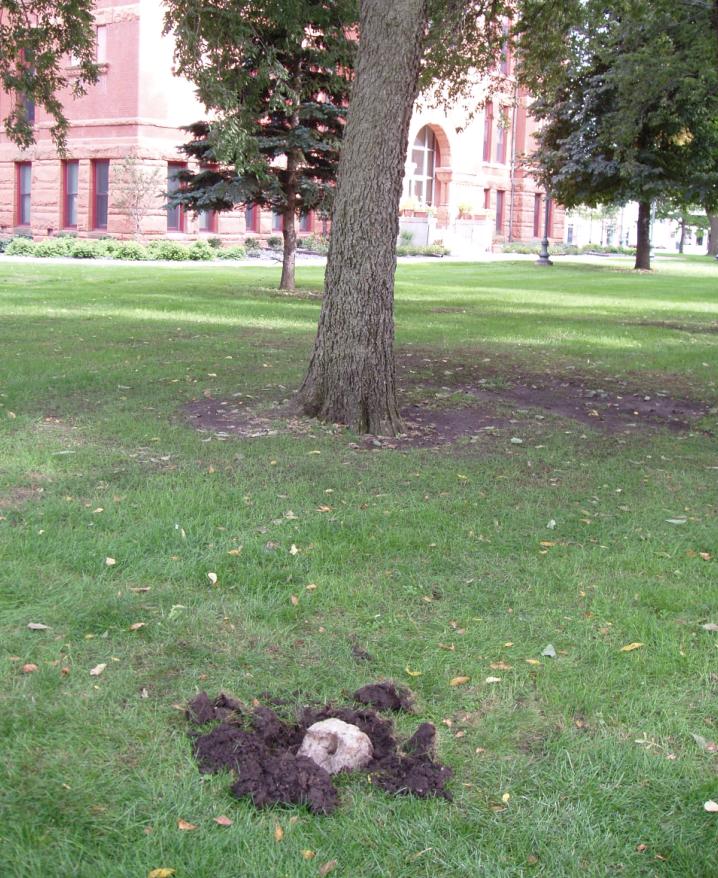 Another view of the marker looking southeast.
No further excavation was done on this date. 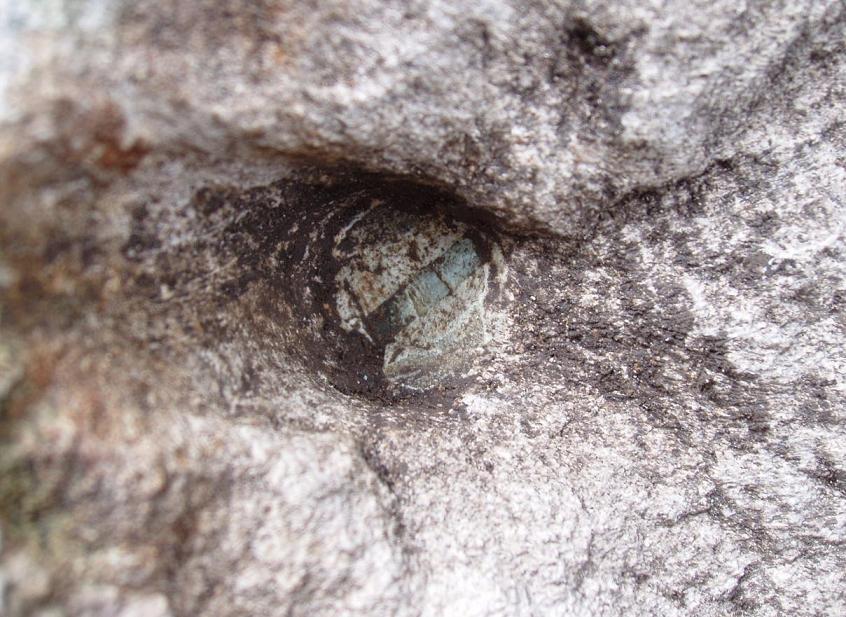 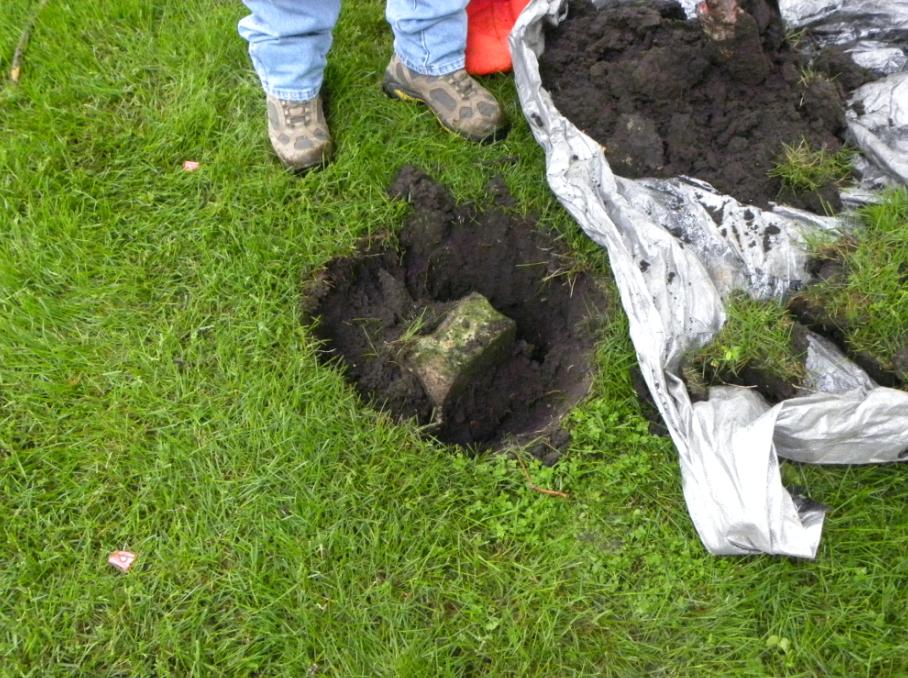 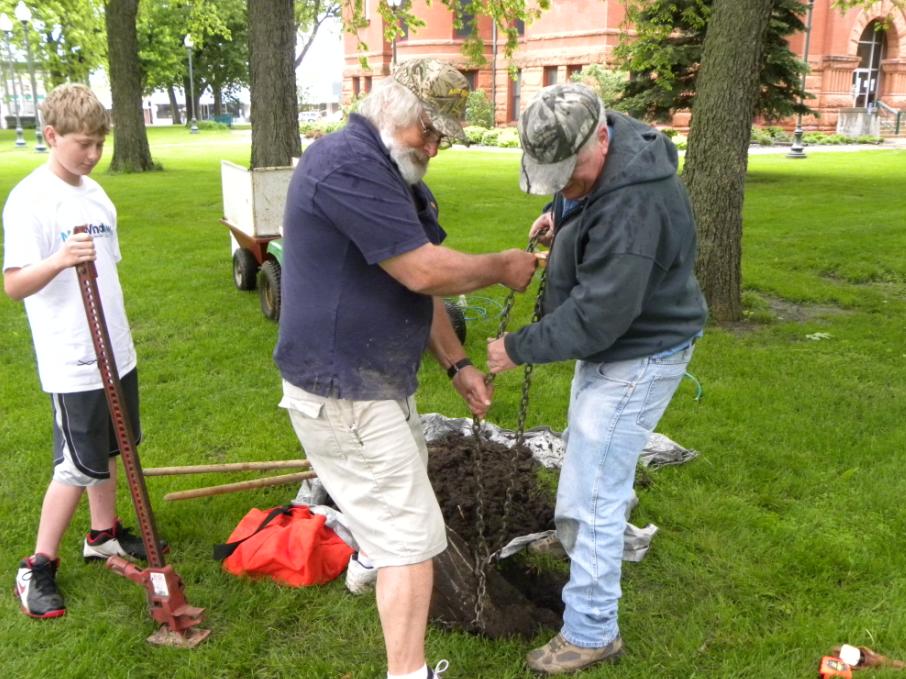 Duane Katt and Gene Thomsen lift out the monument as Nick Katt watches. 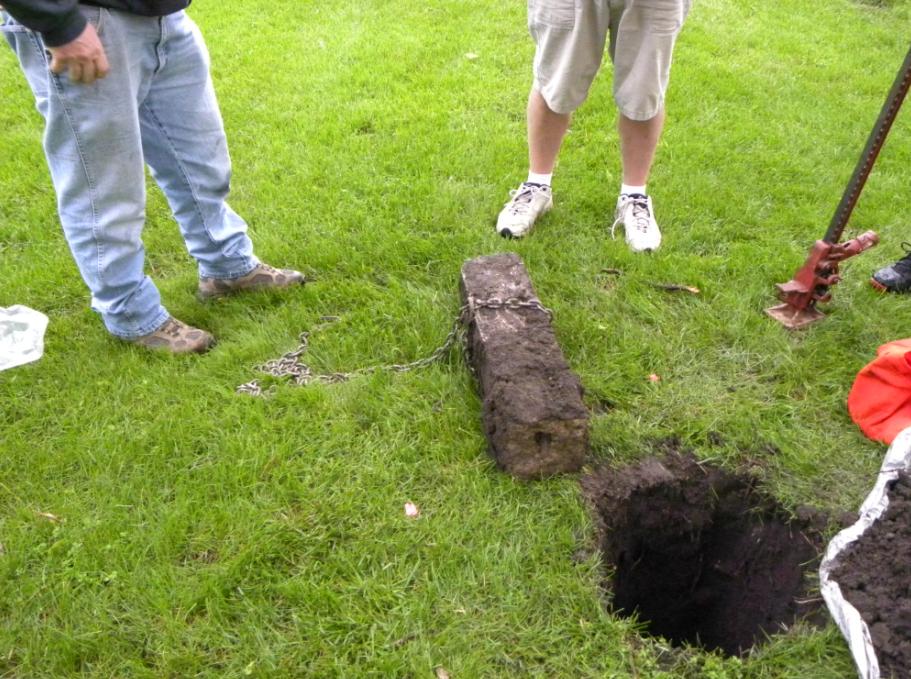 The monument out of the ground. 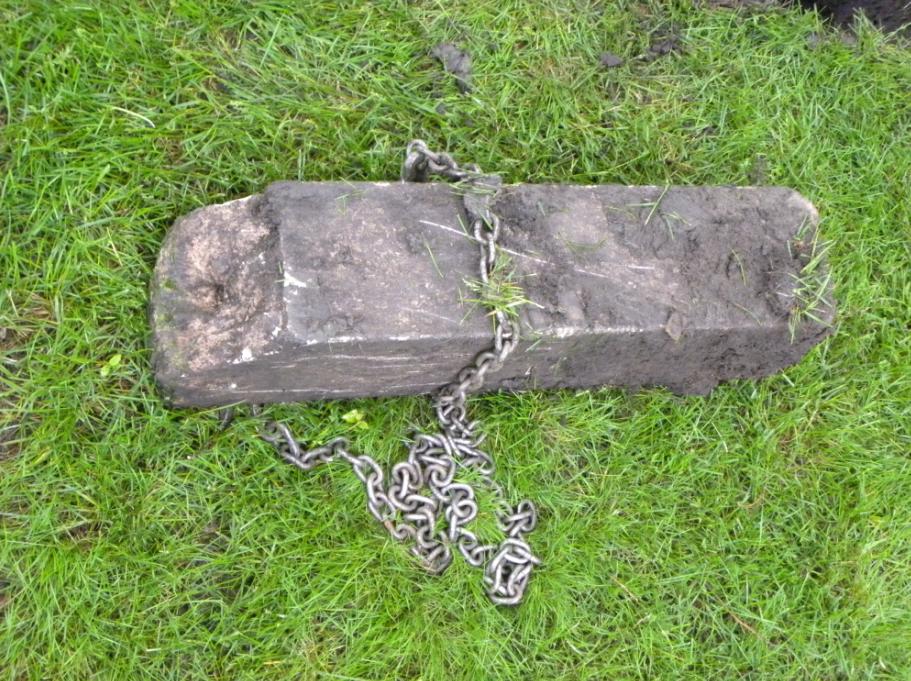 The original length of the stone monument was 30".

Cleaning the monument with water and sandpaper. 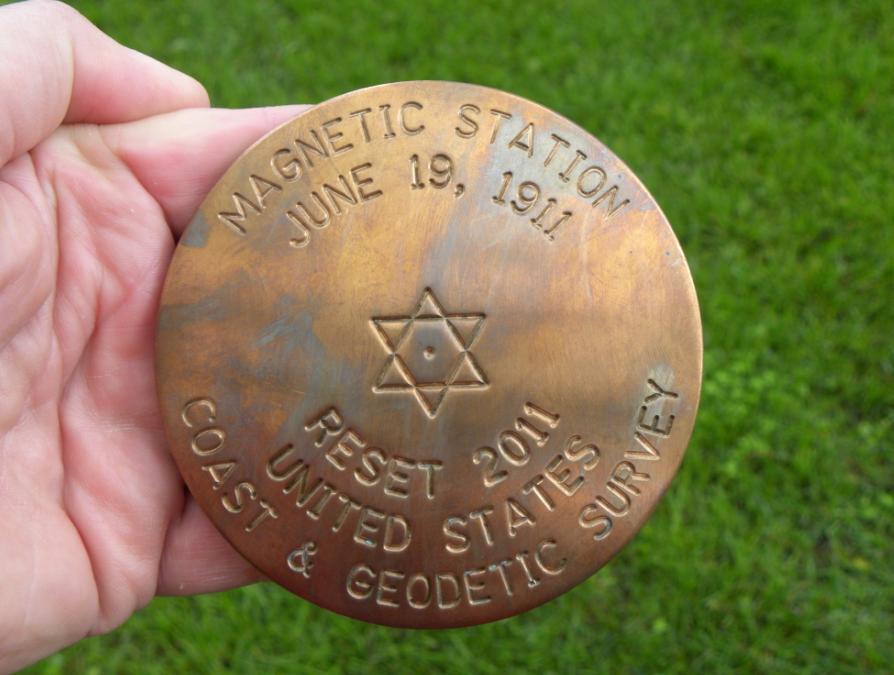 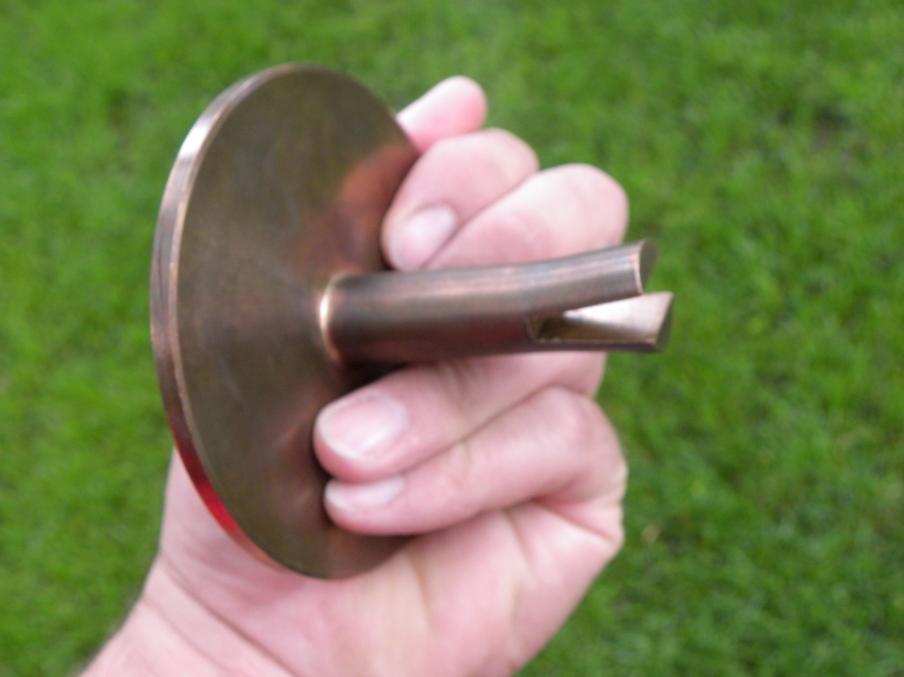 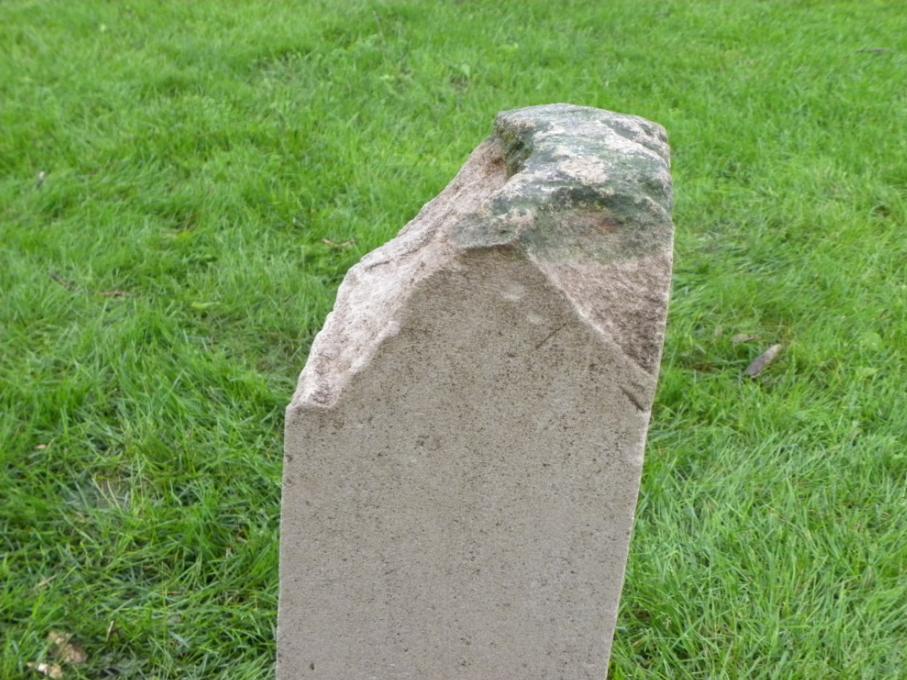 The damaged portion of the top on the monument. 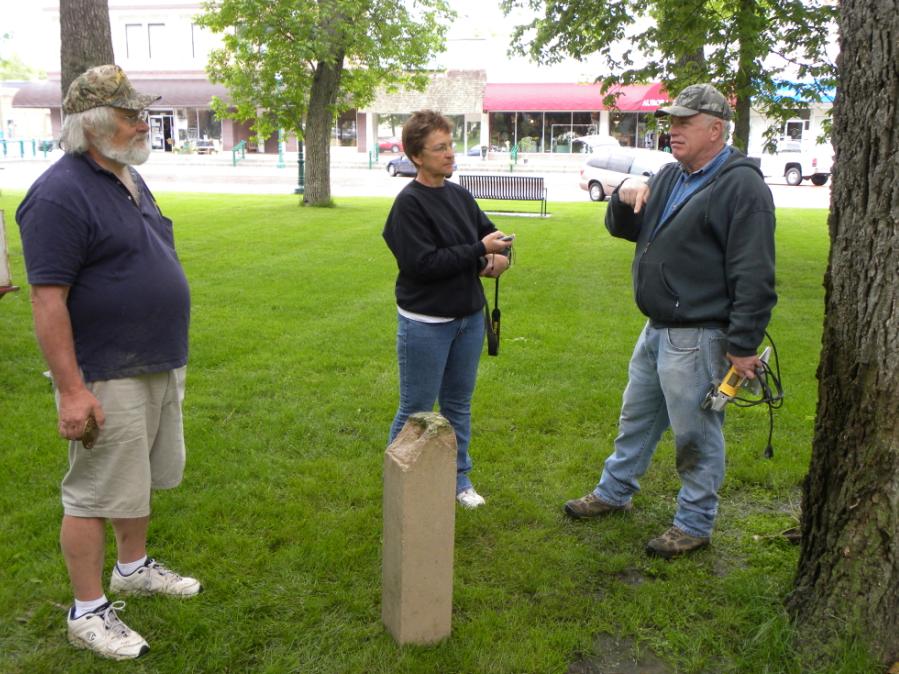 Duane and Gene speak to a local newspaper reporter. 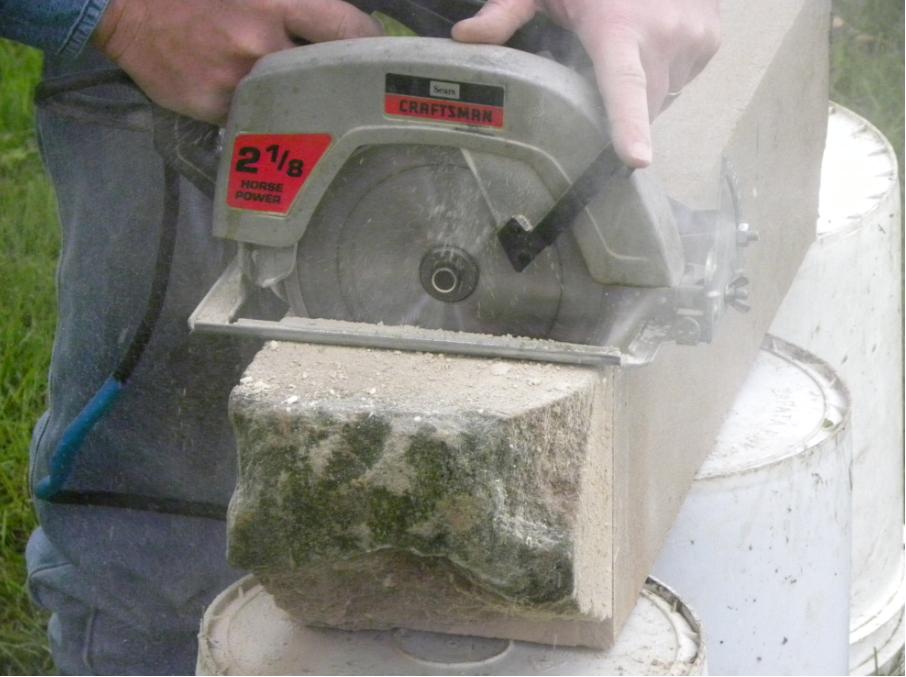 Gene cutting off the damaged portion of the top. 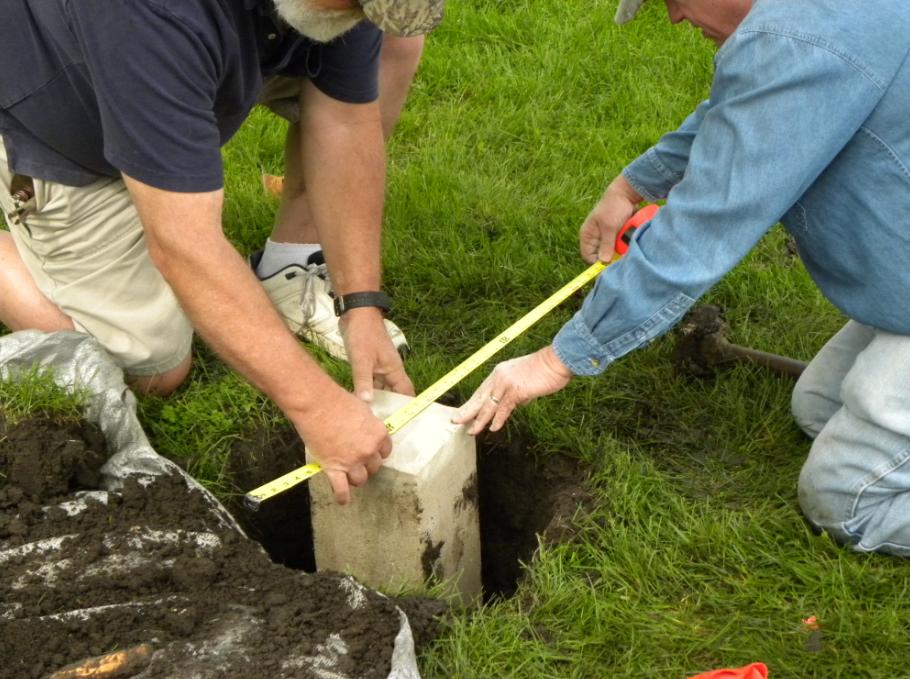 Resetting the monument exactly as found from tie nails. 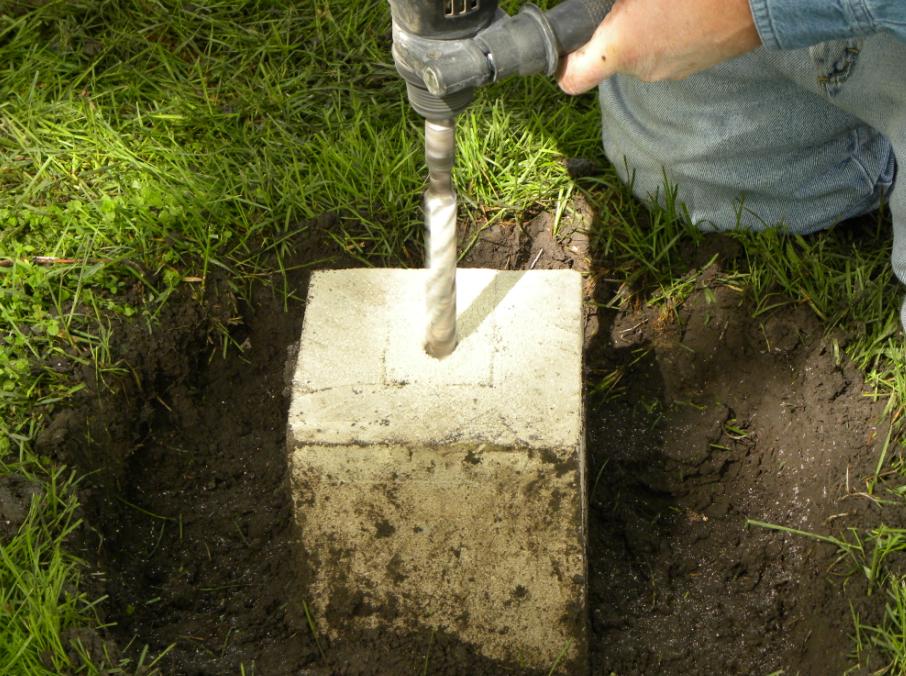 Drilling the top for the new brass disk. 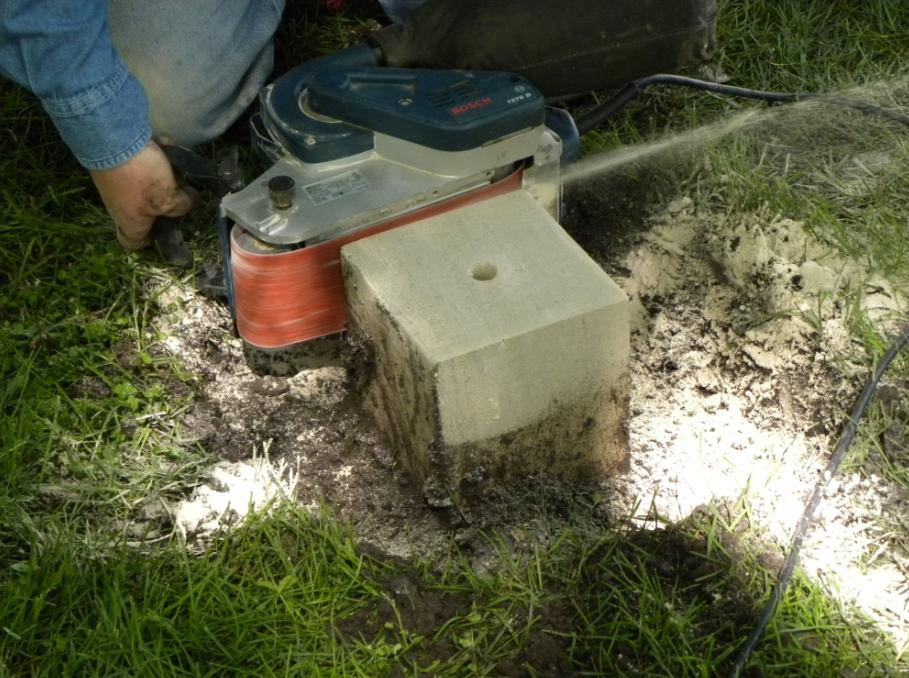 Sanding the monument with a belt sander to obtain the like-new appearance. 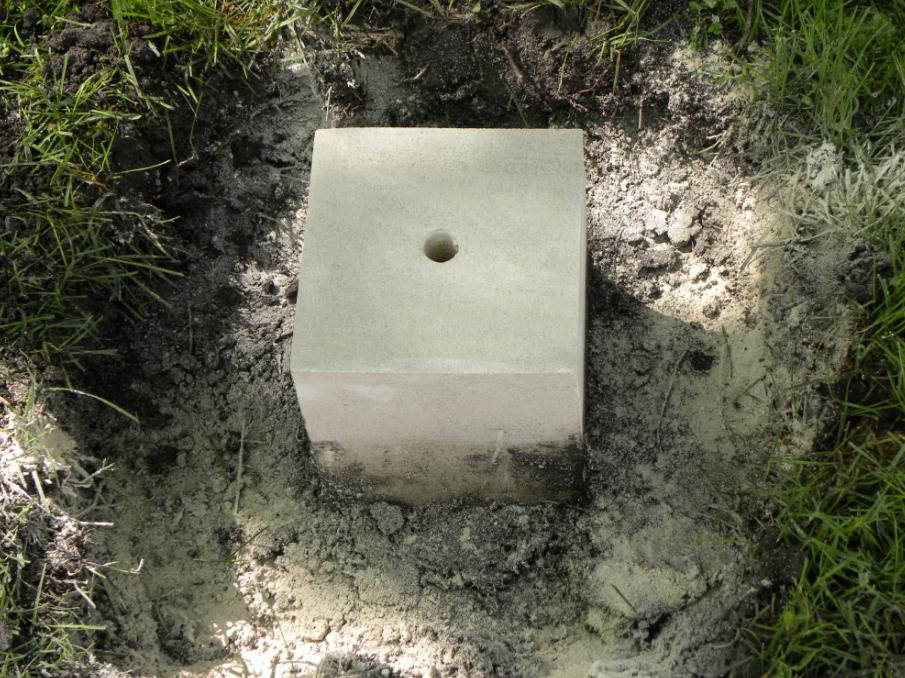 The monument as it originally appeared in 1911. 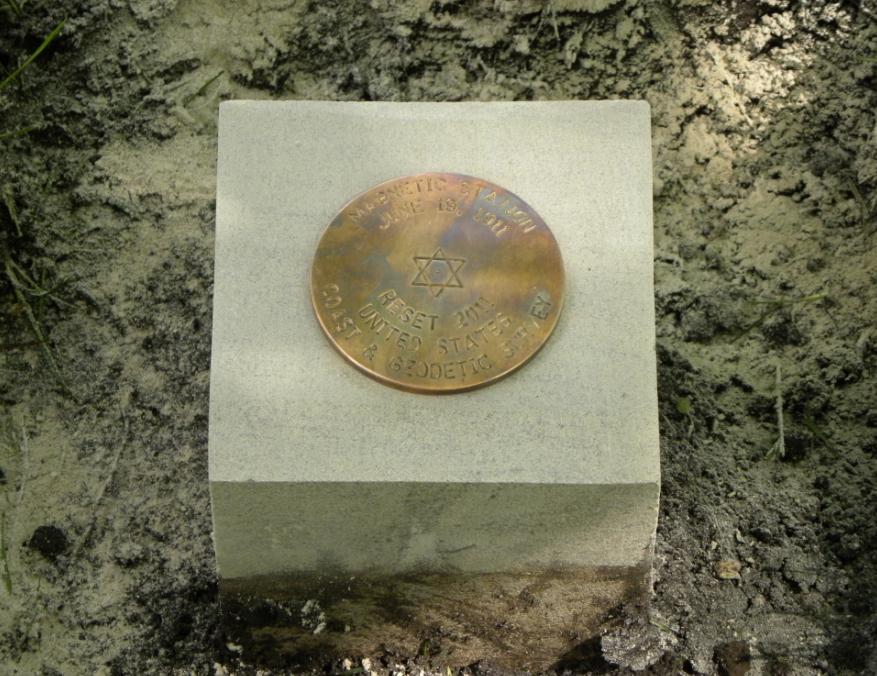 The new brass disk is dry fit into the hole before cementing it into place. 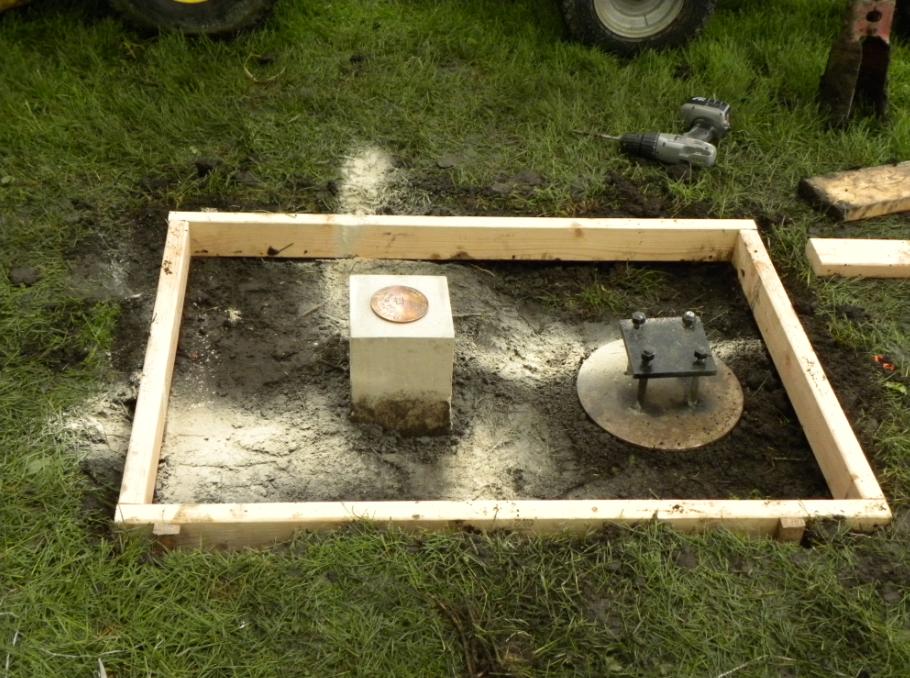 The form in place and ready for concrete. 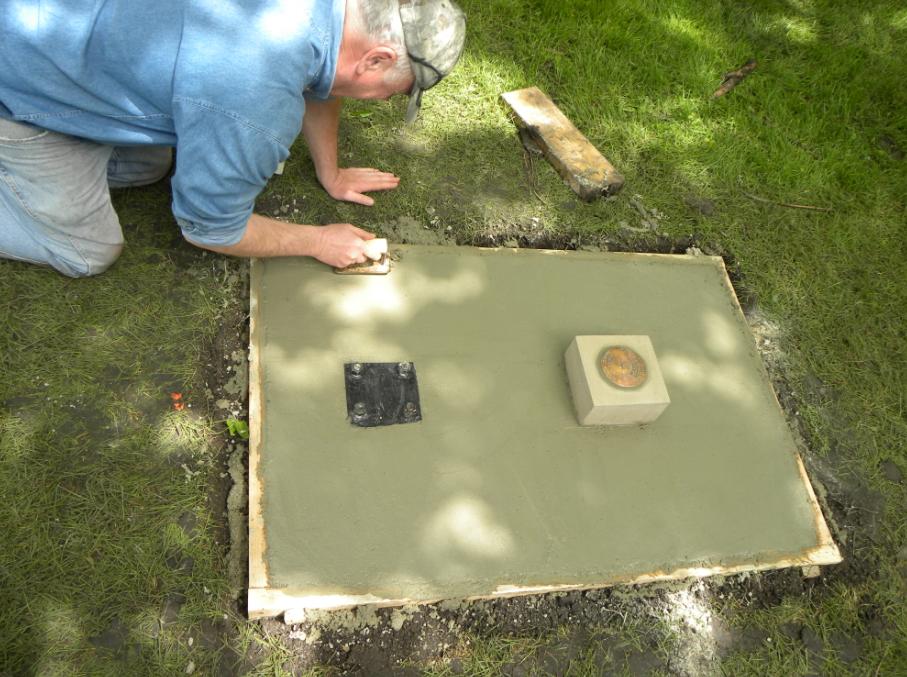 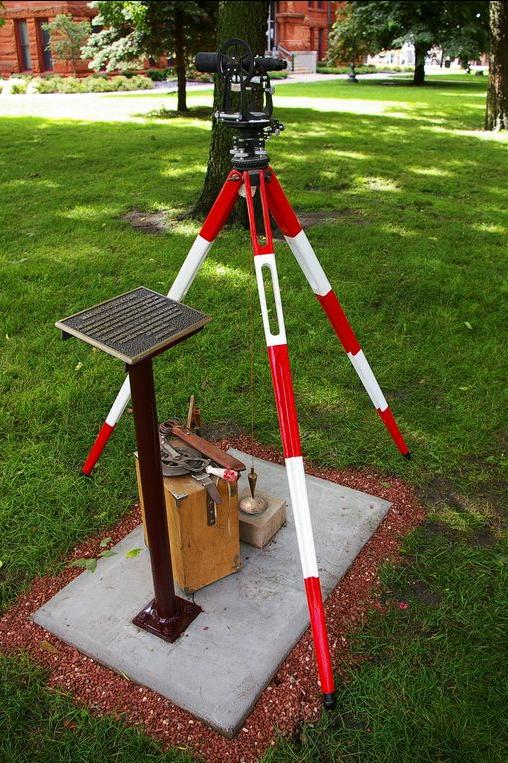 Duane's old transit is set upon the restored monument on the day of dedication. 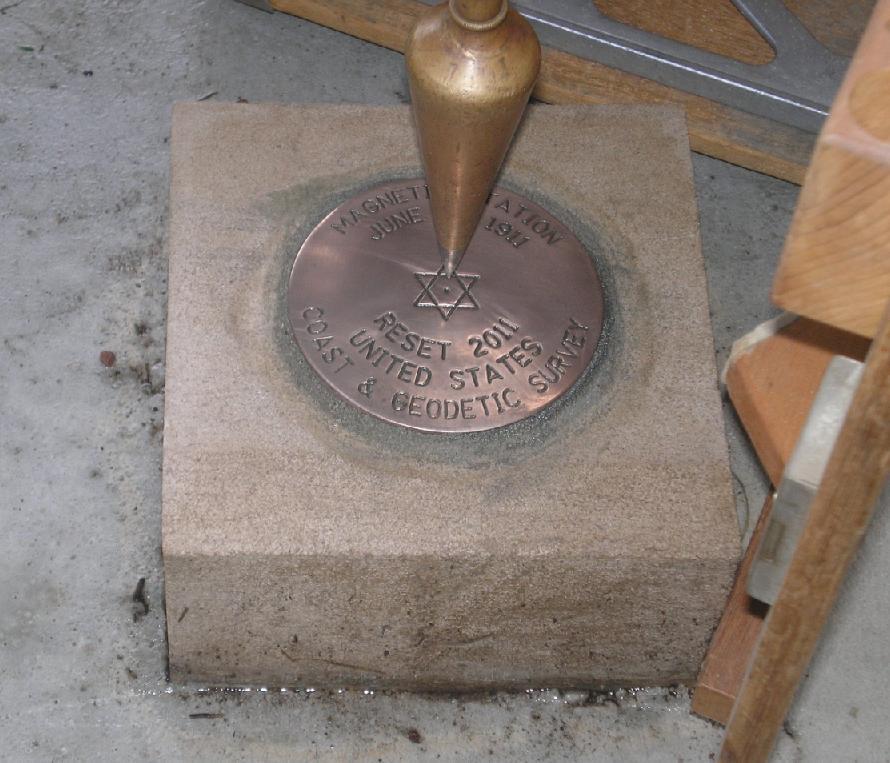 A plumb bob centered over the new brass disk. 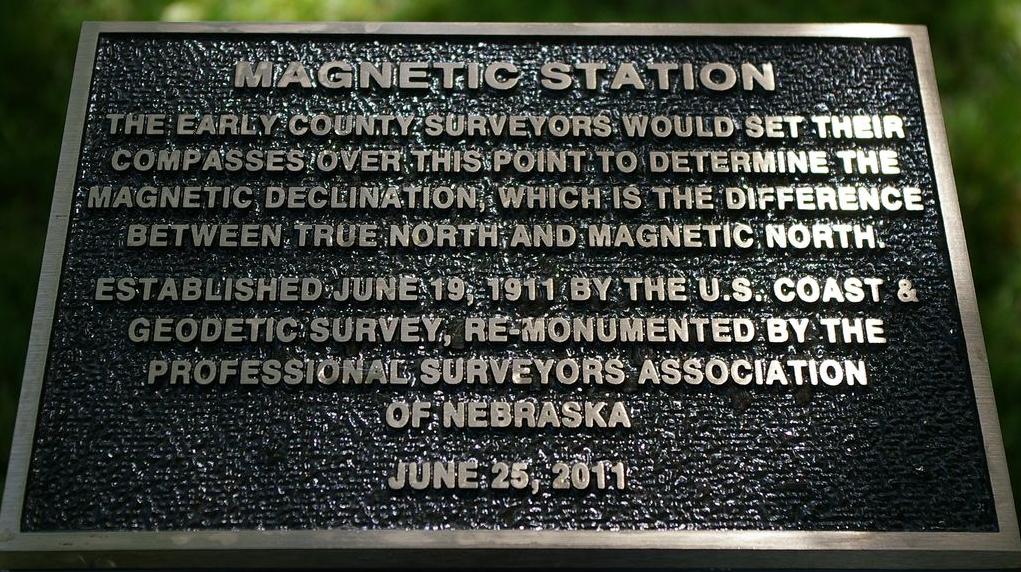 The bronze plaque describing the history of the monument. 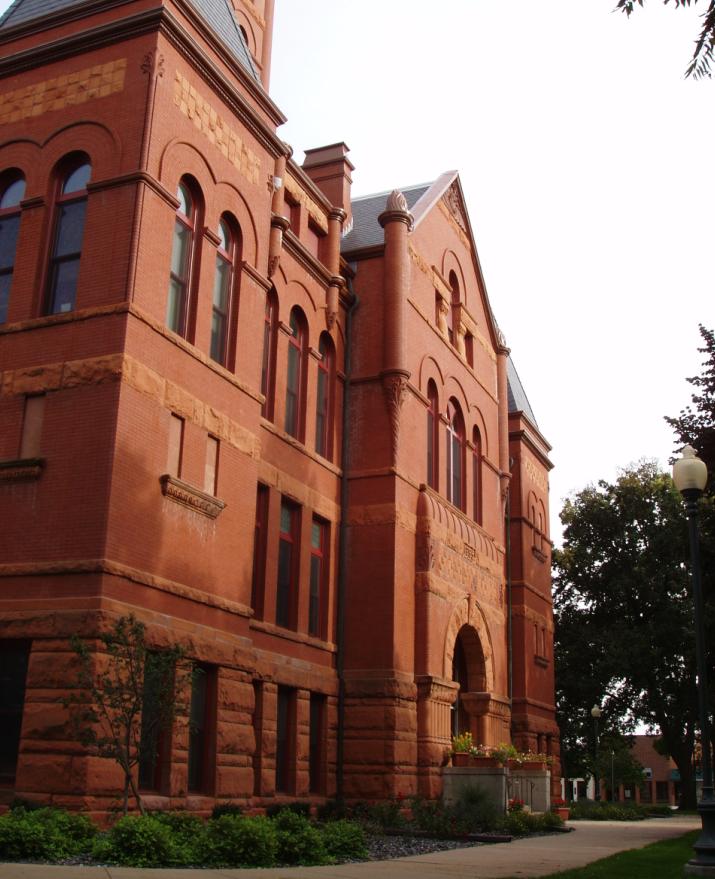 The west side of the courthouse. 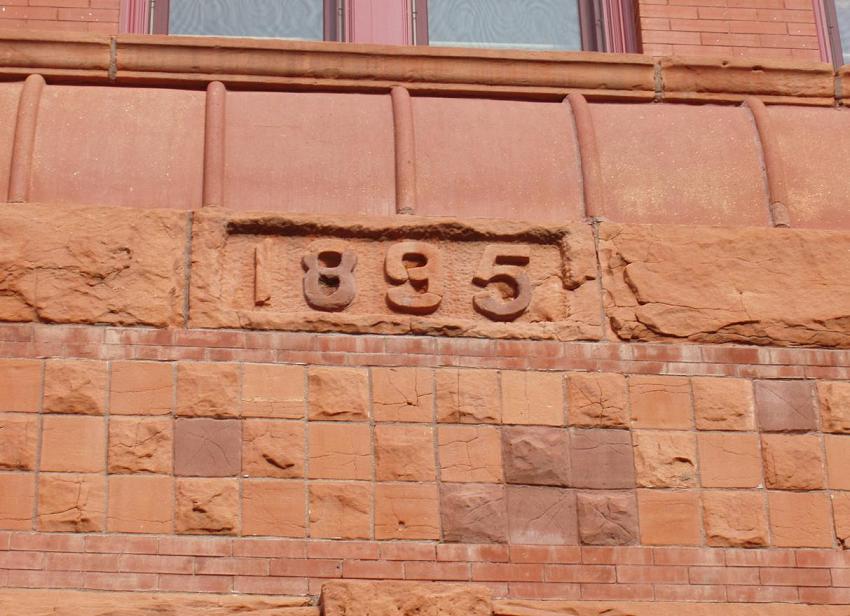 The date on the west side of the courthouse building.

Back to Nebraska Magnetic Stations.